The Demons Within Us 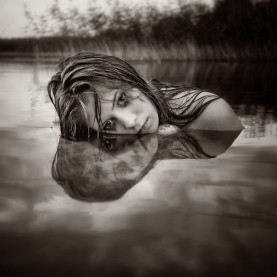 The Demons Within Us

He had no idea what was coming for him.

Tyler moved to the bed, just before his knees gave way. “What is going on here...? I am just a chef... I am not some badass playboy” Tyler spoke to himself, trying to figure out why this is suddenly happening to him. Maybe someone put a curse on me... Have I pissed anyone off lately? He thought to himself. As soon as he asked the question, he realised he probably had. Everyone loved Tyler but he didn’t have a filter, so a lot of things just spilled out of him before he could stop it. Most people weren’t offended for too long though; they know it was just Tyler’s way. He never meant any harm.
Tyler let his face drop into his palms and let himself just relax for a minute. “Breathe dude, breathe... it is all good mate,” he said to himself. “You have been under a lot of stress lately with the restaurant and it being so busy. You haven’t taken much time off for yourself maybe that is the problem.” He said as he started to breathe faster and faster, like he was about to have a panic attack. “Or maybe the problem here is.....” he said raising his voice with each word, “that I am talking to myself which is the first sign of being crazy!” Tyler started to breathe faster and faster and louder and louder. The fast breathing was quickly turning in to hyperventilating and his loud voice was turning in to a voice of rage. “What the hell is going on here? I am so mad I cannot even explain it!” Tyler yelled at the top of his lungs. Every single muscle, bone, vein and ligament in his body was filled with pure rage. He could barely control himself; it was almost like someone else was inside his body and he was on the outside just watching. “Get me the hell out of here Tyler, let me use you, let me use your body. It will be much easier if you just. Stop. Fighting. Me.” Tyler’s voice said, but it wasn’t Tyler and he wasn’t talking to himself. Someone else was talking to him, from inside him. “Whoever the hell you are, I have had enough of this. Get out of my house, get out of my body and get out of my life! Go back to where you came from you evil creature!” He yelled as he pushed with all of his might. With that, Tyler fell to the floor with a body as heavy as 100 men. “Something isn’t right, something isn’t right, something isn’t right” Tyler repeated, over and over again. Something was in his house, something that was very angry. Something that wanted revenge, and wanted to use his body to do its dirty work. But why him, and why was every evil thing suddenly inside of his house?

“I need to get the hell out of here”, he said to himself as he looked at his watch that was sitting on his bedside table. “Oh man, I am going to be so late for work! I’ll be using the car today that is for sure.” “OK shirt, shoes, jeans....” he said running around his room trying to get ready quickly. “OK good enough.” He said, racing out the front door. “Better take the car today, Gab will be pissed if I am late.” As soon as he stepped outside, he realised how cold it was. “Ah crap,” he said as he jumped back inside. “It is so freaking cold outside and so hot inside. I am always boiling in this house. It feels like it is getting hotter and hotter, and the heater isn’t even on!” he said to himself, feeling confused.

“OK jacket and scarf, check and check. Now, I better drive like I am driving the bat mobile or so help me I will bear the wrath of Gab”. Tyler ran his long legs over to his lowered black Ford commodore, jumped in the driver’s seat and turned the keys. With a loud purr he knew he was ready to go.

Tyler reversed out his driveway and was on his way to work. With a look to the front window out of habit, he was startled by what he saw. “What... the...” he trailed off as he stared at the window, still rolling his car backwards. Frozen... he could do nothing. His eyes were stuck like super glue to the window and he had no choice but to keep staring. Tyler pushed his foot on the break, without even realising it. He heard the sound of a car driving past, and like auto pilot on went the brakes. But not once, did he move his eyes from this site. Staring out the window was a face of pure ice. A pure white face, with no expression whatsoever, just staring at him in his car sitting in the drive way. Beside the face, was a long and very thin arm with its hand holding open the curtain, in no way trying to hide itself from view. Its eyes were oval and piercing. They were red, red like blood. Tyler had not moved a muscle since putting on his breaks, except to lock the car doors because he somehow felt safer with these on. The head and arm had not moved even in the slightest, until now. Its head ever so slowly cocked to the left side and then to the right, like a dog does when it is trying to understand something. Once the head was bent to the right, it slowly looked down and moved its head to follow. With that, Tyler said allowed “why are you looking down...? There is nothing interesting down there...”
Faster than a blink of the eye, the figure was at his driver side window. Every single part of his body was frozen, and even though he wanted to move he had no choice but to sit there, staring, waiting for it to do whatever it had come to his house to do. Smiling literally from ear to ear, with a bright white smile and very large teeth, the figure pointed at him through the glass. With a voice that sounded like it was choking, it spoke to him. “I will get you, I will get you, I will get you, I will get you, I will get you, I will get you,” it said so fast that Tyler almost didn’t understand it. “Oh. Fu.........” Tyler yelled as he slammed his foot on the accelerator and reversed out of his driveway as fast as he could. He changed his Ford in to sports mode and floored it. He didn’t know what else to do, and he had no one else to go to. He couldn’t keep dealing with this by himself. “That is it, I am telling Rein. He can help. He used to be in to all of this stuff, maybe he can get them the hell out of my house!” he yelled as he drove as fast as he could on his way to Rein’s.