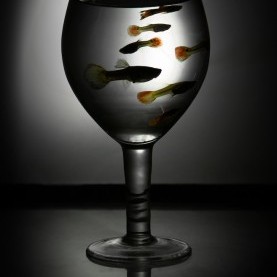 Genre is not exactly accurate: this is a very short story which I would call slice-of-life realism. The story is told in English, the dialogue is in Spanish but I have aimed to make it comprehensible to readers with little/no Spanish literacy.

Camila shows up unannounced. The receptionist calls me in the social work office to say that a Camila Maldonado is asking for me. She hasn’t come for help with welfare forms or letters; if she had, she wouldn’t be sitting there waiting for me.
I find her in the lobby and invite her into an empty office where we can talk in private. Baby Diego wiggles happily on her lap when I smile at him.
“Necesito que me ayude con mi hermano,” she says.
“Ok?” I ask. “En que sentido?”
“Necesito que me ayude a escribir una carta.”
Now she drops her eyes and straightens baby Diego’s little hat. At her full adult height she is four feet tall like her mother and grandmother and wears clothes she buys in the children’s section at Walmart. All of them, along with brothers, sisters, wives, husbands and a growing band of cousins have come from a remote mountain village in Mexico. They live together as they did before they stole across the border, in a decrepit three bedroom trailer heated by a woodstove in the living room. I have been there. I sat with her many times on the bed in the living room in that intimate chaos discussing baby Diego’s growth from the time he was nothing but a little lump.
“Esta en la carcel,” she tells me.
“Que paso?” I ask.
He’s a good man, she tells me. and the family is very sad. She wants to write a letter telling the judge that he should be allowed to come home. He is not a bad person. He is a hard worker and he doesn’t drink. Will I help her?
“Si,” I tell her. But why is he in jail?
“Lo metieron en la cárcel porque su esposa es muy joven. Ella tiene trece. Y lo metieron en la cárcel.”
“Lo metieron en la cárcel porque la esposa tiene trece anos?”
“Si.”
Ah, I say. Yes. In this country it is illegal for a thirteen year old girl to be married.
“Ya sé,” she tells me, “Pero para nosotros es normal.”
“Yo lo sé,” I say, and prop my head on my hand, looking at her.
I hate this.
“Como esta la esposa?” I ask, trying to understand. If he is in la carcel, something happened. Something.
“Ella esta muy triste,” Camila says. “Ella quiere que lo dejen ir.”
“Ella lo quiere?”
“Oh, si. Mucho.”
“El la trata bien?”
“Si, la trata bien. Es un hombre muy bueno. No toma licor nunca.”
“Cuantos anos tiene el?”
“El tiene 21.”
Well, yes. Indeed.
“Tienen ninos?” I ask. I realize I don’t need this much information to write the letter she wants, but I can’t help it. Throughout her pregnancy with baby Diego, we developed a sort of lopsided friendship and I care about her.
“No, she says, “Pero esta embarazada.”

A big sigh escapes me.
I can see it perfectly: the thirteen year old girl who speaks no English and very little Spanish goes to the doctor with her mother or mother-in-law where it is confirmed that she is pregnant. They do not show their delight or any other emotion in front of the large white strangers. Their round faces are stoic, expressionless, and the nurse sends them directly to speak with a social worker. They do not know what a social worker is, but they know to cooperate with large white strangers.
They answer the interpreters’ questions in broken Spanish.
How old are you?
Are you in school?
Where is the father of your baby?
How old is he?
Where does he live?
The large white strangers note only that the address is the same. They do not ask her if she is married, if her baby’s father is her husband betrothed to her when he was fifteen and she was a child of seven. In this country, thirteen year olds are not married.
“El es muy bueno y queremos que lo dejen ir,” she says. The sadness in her eyes will haunt me forever.

I write the letter to the judge stating that Eduardo is a good man, that his family misses him very much and that they need him. That the pregnant child is his wife and that she needs him. That he is a hard worker who doesn’t drink or use drugs. That the judge may please consider that he is not a criminal and let him go.
I realize, of course, that also, he is.
Camila hugs me gratefully and leaves carrying the letter in one hand, clutching delighted baby Diego to her small hip with the other.

I go back into the little room where we can talk in private and sit there by myself, immobilized by a sorrow that seems to expand in all directions. I say a prayer for rain in the high plains of Mexico, that corn may germinate and grow, that the goats may have milk enough for everyone’s babies, that people may find hope in their homelands far away from large strangers with our questionnaires and sudden handcuffs.