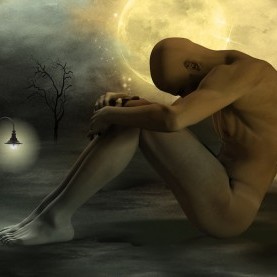 Marcus, a loving husband and father, is a man haunted by memories of his past. After discovering one of his twin sons is hearing voices at night, he finds himself conflicted: is it paranoia caused by his past clouding his decisions or is there something more sinister than sleep talking occurring at night. Marcus must confront his inner demons caused by his past in order to discover the truth to save his sanity and his family.

The soft sound of the floorboards moving. Gentle words whispered in hush. Slowly the sleep fog swirling in Marcus’ mind started to disappear and little by little, he remembered where he was. His body was still not fully awake when he began to open his eyes. The blurry red light from his alarm clock became clearer and confirmed that it was still too early to be awake yet. Marcus’ arms felt as though they were lead as he turned in the sheets and a made a half-hearted attempt to kick the sheet off.

As he attempted to shift more in the bed his hand brushed another but it did not respond. Good. Julie was still asleep, she needed after the long day she had with the boys. Marcus was still not comfortable enough to try to get back to sleep. He needed to turn over more. Standing six-foot-one, he took up most of the length of the bed but managed to confine himself to his side. Julie, on the other hand, although smaller both in height and stature than him, always managed to take the lion’s share of the bed.

He rolled over and came face to face with the back of Julie’s head. In the red glow from the clock, her dark brown hair had a red shimmer through it as though a neon light was overhead. He remembered the way the restaurant’s red neon sign had shimmered the same way as he saw her the first night they met. Beautiful. Marcus gave a sleepy smile at the thought. His eyes closed as he tried to welcome sleep back. Her shoulder length hair brushed over his face as the breeze from the ceiling fan circulated the room. He resisted the urged to sneeze as one of her hairs touched the end of his nose ever so slightly.

With his eyes closed he let out a soft grunt as he turned back towards the clock. Finally, Marcus sensed as though Sleep was finally making a comeback. The soft noise of the floorboards moving pushed sleep away again. He opened his eyes, the night light emitting a candle glow from the hallway, then he saw it. The small, dark silhouette standing only a foot from where he lay. The silhouette moved closer. White eyes. White glowing eyes staring looking back at him. Observing his every moment with intrigue. So close. Too close. The only sound, the dull thump of his heart as it recovered from the skipped beat. Seconds verged on hours before Marcus finally reacted. Launching from his resting posture at sight of the figure, Marcus sat up in bed and turned on the bedside light. Light flooded the room, revealing the tired face of his eldest son Joshua looking back at him, squinting from the sudden bombardment of light.

“Toby keeps talking to me when I’m sleeping” Joshua responded sleepily, shielding the bedside light from his eyes

“Come on Joshua, let’s get you back to bed” Marcus got up taking his young son by the hand, leading him down the hallway. Down the opposite side of the hallway was where Joshua shared a room with his brother Toby. Pushing the door open, despite the darkness of the room, he noted Toby was turned his side and facing the wall, sound asleep.

“He’s quiet now, time to get back into bed” Joshua climbed into his bed and pulling his sheets up over himself he fell instantly back asleep.

Half his luck. Marcus smiled and then checked Toby, moving him back onto his pillow. Toby gave little a grunt of disapproval of being moved then fell back asleep. Marcus looked at him briefly, His chest raised up and down and slowed down as he drifted off into deep sleep. Toby lay on his side, he clutched his little sleep toy, a little brown bear that was given to him when he was younger by Julie’s mother Carla. He loved it and would rarely go to sleep without it. So cute. Toby was quiet now, off walking in the world of dreams. As Marcus began to leave the room, he noticed that Toby was now smiling in his sleep. Must be good dreams. Marcus did one last check over the room before finally closing the door.

He’s too deep asleep to have said anything. Marcus pondered this as he stared at closed door. The question started to circle, echoing in Marcus’s mind. What exactly did Joshua hear?

Marcus turned and started the walk back to his bed. The night light in the hallway kept most of the hallway in a dull amber tone, including the family photos on the wall. All except one. Directly above where the night light was plugged in hung a photo of the family at the beach. As Marcus walked back towards the room he stopped at the photo. The photo was taken just over a year ago at a little beach front town about half hours drive, called Mystic Beach. Julie’s Mum, Carla had taken the photo while they weren’t looking. It was one of his favorites. It reminded him of a different time, a much happier time. It pictured Toby and Joshua building a sand castle with Marcus while Julie lay on her beach towel looking at construction of the boys’ grand castle. Julie was smiling, Marcus was laughing as Toby desperately tried to get the stick flag to stand up on the top of the castle. The stick had been too big for and kept falling over for him. Joshua had a smile from ear to ear as he decorated the castle with shells for the windows. Good times. A drive back to Mystic Beach was long overdue, Marcus thought quietly to himself, smiling. Looking back at the boy’s bedroom door, Marcus’ thoughts once again started pondering the night’s events.

Climbing back into bed, Marcus decided he would have to talk to Julie in the morning, to see if she had heard Toby sleep talking previously. He made sure the volume was turned all the way up on the baby monitor to the boy’s room. Although the boys were far from being babies, the monitor helped their parents keep an ear out from any mischief they might get up to at night. The quiet static of the monitor helped encourage Marcus to sleep now days. He had listened to it for so long, the room felt too still when it was switched off on those nights boys had a sleepover at their grandmother’s place. Julie on the other hand never had that problem, she was always the first one to be asleep at night. Closing his eyes, Marcus lay still allowing the wave of sleep to wash over him. The question over Joshua’s encounter sounding in his mind before gently fading into the silence of the night.