A Communion in Solitude 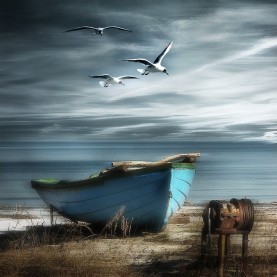 A Communion in Solitude

A communion in Solitude is a historical fiction, set at the turn of the 20th century, which explores the story of the mysterious sole ship wreck survivor Oscar Larsen, stranded in the inhospitable wilds of South West Tasmania, while exploring the torment of an unrequited love, an unreconciled loss and the subsequent depths of loneliness and despair spent in solitude.

~~The brittle warmth that finally embraced him that morning as he lay prostrate, his tongue suckling on the coarse grit of the sand on which he found himself abandoned, was a welcome excursion from the torment of all that had preceded him. So much so that it was barely to be believed and certainly not to be trusted. Was the star of bright light that morphed into a hexagonal column and that hinted of blues and reds, oranges and purples piercing through his closed, yet exposed, eye a cruel farce? A portent of time and space slowed to an excruciatingly tortured final reverie with the sanctity of simply being alive, before the light approached rapidly, grew unimaginably large and consumed all in its wake.

Annihilation he had seen, touched and tasted. Souls extinguished. And not a single hand on a single timepiece anywhere throughout the vastness of the world had ever paused to acknowledge their passing. Was this his unmarked time approaching?

He had seen it played out in three acts the night before. He had seen it in his native Norway, in the squalid streets of London and out in the middle of the world’s boundless seas. Was this how his simultaneous introduction and farewell into his own bottomless abyss was to proceed? Prolonged and protracted. A pause long enough to allow him to taste the sweetness of life one last tantalising moment before the rush into nothingness – a rebirth in reverse.

The light remained but it did not encroach upon his mind’s eye any further. Enough time passed to brave the prying of his eyelids ever so slightly. The column of light disintegrated and it was replaced by an array of spectacled light dancing off the blanket of ocean that lay vast just beyond his feet, which is where his slanted gaze lay. He shifted his eyeball down to the immediate bright sandy pillow that engulfed the other side of his face and caked the other eye as conjunctivitis would an infant. He dared breathe and was rewarded with a virginal breath, the purity of which utterly disturbed the equilibrium of his congested lungs, and a violent racking cough that confirmed beyond doubt his mortal predicament.

Once emancipated from the uncontrollable cough that shook his entire being for a full two minutes without relief, Oscar found within himself both enough clarity and strength to lift his head. Like a lizard whose blood had been sufficiently warmed he pushed his torso up a little with his two front legs and cocked his head around to survey what lay before him. Sand to be sure. Fine, white sand like talc. It supported his prostrate condition, filled his eyes, nose, ears and mouth. Beyond its somewhat agreeable comfort however, lay something altogether foreign.

Beyond the edge of the dunes that commenced some fifty yards or so in front of him emerged a forest of unfamiliar offerings of scrubby heath, and beyond that in the distance, craggy mountain peaks rose forth from the forest and jutted into the blue canvas on which they were currently painted. He gazed at the pastel landscape with its greens and blues for a while and, once satisfied that it was not a mirage, he rotated his head, again much like a lizard, to the scene beyond his feet.

And then in a mad rush that emulated the rapid rise of pain that at first gripped his outstretched arms then migrated down his torso and into his legs and right through to his toes, the events of the night before flooded back into his mind. A kaleidoscope of images and deafening noise. Men shouting, and then screaming in absolute terror. The abrupt shuddering sound as a thousand tonnes of fully-laden vessel strikes a reef without a hint of forewarning. The bright flash of light, the immense shock wave, the explosion of all the senses at once and the obliteration of all structure into myriad detritus.

The screams. The terror. The panic.

And then without time to even think something altogether different – cast into the relentless slap of the ocean. Cold, wet, tumultuous.

Up, down – under, up, back under – disoriented.

Still more screams, now more distant. The ocean tossing him all around and the relentless slap, slap slapping of his face as he struggles to stay afloat and draw breath without it being accompanied by a gob-full of brine. Dragged this way then shunted that. Where the fuck am I? Air, give me air – head up, keep your head up! – was all that he could instinctively muster.

He knows he has only one chance to get it right. There, over there – water breaking. Strips of luminescent waves, frothing in the moonlight. It must be the shore. He is already tiring and his heavy clobber is dragging him ever so persistently down. His head now disappears under every chop of water. Steel ballast crashes into him with every shunt of water. He is edging towards the frothing shoreline, but it is agonisingly slow and it is further than he first thought.

A sucking sound like the bellows of a cave followed by the crashing sound of a guillotine of water heralds a large wave breaking out beyond him, from where he is trying to escape. The wall of white water rushes at him and then envelopes him without remorse. For a moment, as he faces all directions of the compass and to both heaven and hell as well, things seem blissfully peaceful. But the reverence is broken as he is slammed into the coarse face of a submerged rock and held there. Winded and without breath, he thrashes in a panic and as the burning breathless pain rising from within threatens to consume him against his will, his head pops to the surface. A gasp – and he is pummelled once more by another wall of white water.

This time he bounces numerous times off the coarse submerged rock and its weedy, slimy surface. For a period he clings on desperately to an outcrop of rock as he is relentlessly pummelled and is pried free by the remorseless thrusts of water. He can feel the skin on his knuckles tear, and a sharp edge push through his mop of hair and slice deep into his occiput. Again panic sets in and he thrashes and again the burning pain of oxygen deprivation rises first seemingly out of his stomach but quickly it resides in his chest before reaching out to his brain. Once more on the brink of collapse his head pops to the surface. Now threatened with an implosion of mortal anxiety he quickly faces the direction from which the waves have come, only to see yet another wall of white water cascading towards him. This time he notes all the debris in the water, and reaches out to a passing plank of timber, which he clings to. He has just enough time to curse at the maleficence of nature then quickly turns to face the direction of the shoreline, before he is once more overcome. On this occasion the white water picks him up and hurtles him forward in what would feel almost exhilarating if it weren’t for the fact that he is being force-fed seawater seemingly by the gallon. He continues to be propelled as he once more struggles for breath and the force behind him begins to slowly but surely retire and abate. The force of water now weakens to the point where it propels him no longer and, while white water exists all around him, it is of a far gentler disposition from that which he has just experienced.

His legs slowly drift vertically below him and before reaching the perpendicular the toe of his boot strikes the sea floor. Realising that he can just about stand, he desperately tries to surge further forward, striking out with his arms and legs, only to be dragged back by the draw of water momentarily before surging forward once more. This dance continues half a dozen times or so before he has a sure foothold. Then he can see the sandy beach and he rushes for it, lifting his knees high before collapsing face -first in its bosom as he clears the last of the water. He pants deeply, closes his eyes and rapidly succumbs to the descending veil of unconsciousness.