The Colour of Respect 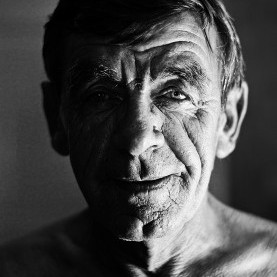 The Colour of Respect

A colourful cast of characters take a Friday night train ride to the Perth suburbs. Their eventful journey will teach them that respect is not determined by skin hue.

The heel of my left shoe caught in the grooved threshold, forcing me into the brightly lit train rather more quickly than I had intended.

I scanned the carriage to see if anyone had noticed. The majority of the carriage lay to my left, twenty people keeping to themselves in groups of one. They were ensconced in their own embarrassment for, like me, they had nowhere to go except home on this train bound away from the city on a Friday night.

I turned right, towards a small pocket of a dozen seats and sat with my back to the window.

Here I found happier company. Opposite sat a woman with a stroller. A small boy lay prostrate across several seats at her side. The woman stroked his dark fuzzy hair and spoke quietly to him. He slowly shook his head and burrowed it into the seat. He twirled his body like a horizontal ballerina, coming to rest in a tilted sitting position, seemingly satisfied with his accomplishment.

The woman produced a small jumper and gently wriggled the boy into it. The red and green stripes clashed with the pale pink of his pants. He belonged aesthetically to the woman, who was clad in an equally mismatched bottle green headscarf, pale yellow collared shirt and deep blue skirt with small pink flowers.

Left to his own devices once again, the boy turned his gaze on me, raising his eyebrows in expectation.

I began to feel nervous, as though I had forgotten my lines.

The boy tipped his head. Well? he seemed to be asking.

I flicked my eyes quickly to the woman, then back to the boy, trying to redirect his attention.

The boy frowned and peered at me through his eyebrows. I hung my head, shamed by the boy’s disappointment.

The doors slid open. An elderly man, sparse white hair, stumbled through. He slammed his heavy wooden walking stick into
the thin carpet, looked left, looked right. He swept the faces, taking a preliminary travel census, then hobbled hopped, hobbled hopped, towards me. He stopped two seats away from me and sat down heavily, directly across from the boy.

The boy gave him a quick once over. He screwed up his nose, turned in his seat and pressed his wrinkled appendage against the greasy glass.

My eyes tracked a new noise.

It was coming from a man-boy slouching in a Priority Seat: reserved for the elderly, disabled and pregnant.

The new noise was neither pleasant nor quiet. The man-boy’s dark head pulsed in sympathy with the noise. His thick lips moved inaudibly.

The boy at the window didn’t move.

The elderly man squinted at the man-boy. His scrawny shoulders raised in silent rage, distorting the thin tawny cardigan. The wizened paperbark skin of his claw was stretched taut over the heavy wooden walking stick. His breath escaped in soft snorts from his nose. He was poised to strike.

I waited, alarmed, for him to declare his challenge.

He swung his head towards me, looking for support in his mission.

The man-boy’s head continued to pulse gently, but firmly. His strong, velvet hands fiddled with the noise box. The noise grew louder.

I looked away before the elderly man could recruit me with his squint. I focussed on the small boy and his nose at the window.

The elderly man stomped his walking stick and shifted in his seat.

The man-boy stretched his arms, arching his shoulders. He rotated his arms slowly up towards the ceiling and leaned back against the wall.

This appeared to incense the elderly man further as he waggled his walking stick around in a circle, stirring the carpet.

As the doors opened, the elderly man burst out of his seat, thumped his stick around the short metal barrier at his side and pulled at the doors urgently.

“You! You there!” he addressed two transit policemen waiting on the platform. “This one, this one here, tell him to cut out the racket! Anti-social behaviour! Not permitted!”

The policemen boarded the train instantly.

“Who? Who is it? Who’s making the noise?” the stockier of the two demanded of the passengers on the carriage.

“Him! It’s him over there!” The elderly man jabbed his stick at the air, attacking the direction of the man-boy. The man-boy jerked his head forward and opened his eyes. The brilliant whites narrowed first at the stocky policeman, then at his would-be attacker.

I strained to hear the interaction between the man-boy and the policemen but was intercepted by my neighbour.

“I’ve had them arrested for less,” the elderly man nodded at me triumphantly. “They think they can walk around treating us like that, it’s just not right. We need to stand up for ourselves.”

I stared at him, dumb.

I looked away, confused. I met the eyes of the little boy’s mother and I felt a strange guilt. I desperately tried to communicate by telepathy that I was not with the elderly man, that we were not bound by skin pigmentation to agree in ideology.

Her wary look gave me neither reassurance nor condemnation.

The policemen had left, the noise box was silent. The elderly man sat regally, justified, both hands resting confidently on his heavy wooden walking stick.

The man-boy slouched, deflated, hugging his noiseless box. A red cap had appeared on his head and sat askew. He pouted.
“You could’ve fucking asked,” he mumbled to the wall in front of him.

The elderly man jerked. I felt the shock through my seat.

The man-boy drew himself up slowly, turned his cap forwards, leaned low towards the elderly man and scowled.

“I said you could’ve just fucking asked me! What are ya, fucking scared of a black man, are ya?” he growled.

I choked on a laugh, spluttering, then sneezed and hugged myself tightly. I examined the ceiling carefully to avoid eye contact.

“I could have you a-rres-ted for that, young man!” The elderly man’s pale face turned a deep scarlet. “You just wait until we get to Armadale!”

The elderly man sat, jabbing his walking stick at the ground at random intervals and huffing to himself, biding his time until the train arrived at Armadale, bringing the end of the line and fresh transit police.

The man-boy gently turned on the noise box and swaggered to the door, alighting into the night without a backward glance, briefly colliding with the young girls rushing to enter the carriage.

The elderly man slumped on his seat and let his walking stick drop between his legs, defeated.

The young girls milled around the door, not bothering to sit. They giggled and shrieked. One attempted to apply red lipstick to her friend’s pale lips, her task made more difficult by her friend’s attempts to turn her head to pull another girl’s long blonde hair, straight as a pin.

The elderly man turned and looked appealingly at me.

“These black youths. No respect. No respect at all. Someone needs to give them a good belting, that’s what’ll fix them. Too soft on them, that’s what they are.”

I inclined my head slightly, not wanting to be seen to agree nor disagree.

The blond girl yanked her straight glossy hair free and staggered towards me, batting her long black lashes against her unfocussed blue eyes.

“’Scuuuse me, d’ya have a light?” She held out one hand unsteadily towards me as the other put a cigarette to her lips, ready for action.

She swayed gently, leaning forward as though to fall on the elderly man’s lap. My muscles tensed in preparation to break her descent as my nose detected the sweet smell of bourbon exuding from her pores.

My muscles made a hasty retreat to several seats away as she vomited at the old man’s feet. A few splashes hit his shiny black shoes and the pool began to run towards his walking stick as the train recommenced its journey.

He sat, motionless, in shock, staring up at the girl, who burped, then giggled.

“Sssorry…” She then burst into tears and staggered back to her friends.

He remained like that until the girls alighted at the next station.

He was still there when the announcement came: “Now arriving at… Sherwood.”

The woman moved quickly and efficiently before me, directing the boy out the door and over the gap between train and platform. I silently helped her to manoeuvre the pram over the gap after the boy.

I peered back through the open doors at the elderly man, who stared at the pool of vomit, stricken.