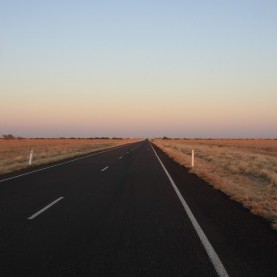 In 1994 Peri Hoskins spent five months travelling right around Australia including spending some time in the remote outback as an employee of a mining company. East is based on Peri Hoskins’ diary notes of this journey.

The bonnet in front of me is big and white. Rain on the windscreen – the wipers sweep it away. The clouds are grey, the road is grey, the suburbs are grey and I am leaving. There is joy in that. I am leaving it behind – a life – small, petty, viciously circular. Out in front is the road and I don’t know where it will end. I am free. I am almost young.

A beginning. Renewal pulses in my blood, pumping out from my heart, through my veins, feeding me, making me new again, a keenly conscious being reaching out to the uncertainty. This road will lead me to places that I have not seen – to people I have not met. There is no place I have to be and no time I have to be there.

I drive on and on leaving the city far behind. The rain clears. Sunlight glints on wet grass and trees. I see farmhouses, fences and cows. The gnawing in my belly eases as I am gently enveloped by the freedom of the great mystery now upon me. The shackles of the old life fall away, for I am shedding a skin – dry, worn, old and scaly. I found the courage to step into the dream. And the dream has become real.

The life of a suburban lawyer is behind me. Small decisions. Small repetitions. Which tie to wear today. Pay the electricity bill. Sunday – iron five shirts for the week ahead. See the same people. Say the same things. Hear the same things said. In that life I wondered whether I had it better than the petty criminals I represented in court. Some had no job and no home. They pleaded guilty and I said what I could say, for something had to be said. And then the court, that street-sweeper of humanity tidied them away. For there must be a place – there must be somewhere for them to go: a prison, a halfway house, a drug rehab centre. There must be a place for everyone – somewhere. These people had fallen through cracks and become untidy. Did they envy my tidy life, those that I helped to tidy away? Did they see my life as I saw it – not a tidy life, but a tidy prison?

Tidiness. I had been taught to lead a tidy life. What was it they had said – the teachers, the headmasters? Work hard at school. Get a good job. Be a good employee. Pay your taxes. Mow your lawns. Be a good neighbour. Be a good citizen. Lead a tidy life. Not a full life, a varied life, a great life – no, a tidy life of small neat circles. I have lived thirty years.

As the trees and houses and petrol stations whistle by the reasons for leaving once again crowd my mind. At thirty, life no longer stretches out before me like an uncharted great ocean. If I live to be eighty, more than one third of my life is spent. Where am I? At a time of life when I am supposed to be somewhere – I am nowhere I ever wanted to be. The familiar yearning claws at my insides again – but it’s different now – happy knowing I have been true to it – finally.

I have been at the wheel for four hours. The muscular movements needed to keep the car on course have become automatic. My thoughts drift freely now, first to the future – new pregnant with possibility, before anchoring in my childhood. I recall a long buried idea – from a time of wonder at a world full of possibilities. As a child I thought I could see into people, a kind of second sight.

Memories flow into my mind – sharp, clear, focused. I see things now as I saw things then. I am a small boy sitting in the passenger seat of a car. My father is driving. We approach an intersection. A policeman is standing in the middle directing traffic. He signals the car in front to stop. The policeman fascinates me – his neat blue uniform, high black boots, long white gloves – his precise hand signals. He makes cars stop and go by moving his hands like the man made the puppets move at the fairground. The gloved hands move and the cars obey, crossing the intersection, slowly and respectfully passing the uniformed man.

From above I hear the noise of a plane. In the eye of my mind as a child I see the silver wings and fuselage. The policeman’s eyes turn skyward to the plane I see clearly in the window of my imagination. The officer’s long-gloved hands slowly fall to rest at his heavy belt. Cars bank up at the intersection. The driver in front looks at him for directions but he gives none. He is unconscious of the traffic, his attention focused in the sky above. The face of the policeman loses form and I see into him. First I feel his discomfort in the hot uniform, the dryness in the throat and the tiredness behind the eyes. Gradually my perception deepens. I sense the numbed heart, the thwarted ambitions – the hopes and dreams unrealized and gone awry. He doesn’t want to be here, directing traffic. The past has cheated him. He is disconnected from the present and fearful of the future.

A car horn honks from behind. A driver doesn’t know why the traffic is not moving. The policeman’s eyes return to the traffic, his arms snapping up with military precision. As he waves us on, the look of purpose clothes his face once again and the moment of seeing into him passed.

The second sight would come to me without warning and always just for a fleeting moment or two. I would see my mother trying to hide an emotion or catch my father unguarded, looking into the distance. In the moment of second sight the physical would melt – the body become transparent and amorphous. Instead of seeing the person I would see into the person – reach inside to the heart, sense the fears, touch the dreams – see the humanity, raw and struggling.

I am between cities. The rain pelts down on the windscreen in huge interconnected drops. I switch the wipers to their fastest speed – but the blades are old and worn. Wipers at full speed and the road ahead remains a watery blur. A service station appears out of the murky grey. I swing the car off the highway into the sheltered forecourt. As I get out of the car I notice a man – or maybe a boy – watching me from the shelter of the forecourt roof. Clad in an old jacket, faded jeans and sneakers, he holds a scuffed briefcase. He is slim with a birdlike frailty, dishevelled, wet and ill at ease. I can’t see the pupil of one eye – the whole of the eye is blood red. The red eye marks him out as different – the injured bird that can no longer fly with the flock.
“Can you give me a lift, mate?” he asks in a small voice.
I look him over once again. He is smaller than me. If I have to I can open the door and push him out of the car.
“Where to?”
“Down south, Huberville ... or wherever.”
“We’ll see.”
I lock the car and go inside the station shop.

I feel the gaze of his eyes between my shoulder blades as I fit new rubber to metal wiper-housings. The rain hammers down on the forecourt roof above. New blades fitted, I throw the old ones into the black plastic bin next to the petrol pump. I turn to face him. “What happened to your eye?”
“I got rolled. They took all me money. That’s why I’m hitching,” he says in a squeaky voice.
“All right, hop in.” I open the passenger door.
“Oh thanks.”
His face brightens as he hastily takes the passenger seat. He puts the briefcase at his feet. I start the engine and steer the heavy car out into the wall of water.
“I wouldn’t like to be hitching in this rain,” I say.
“I sure appreciate you giving me a ride.”
“What’s your name?”
“Rex.”
“Vince.”
He looks over my shoulders and chest.
“Are you a bouncer?”
“No, a lawyer.”
“A lawyer? I never met a lawyer before, like ... to talk to ... ”
“You got rolled?”

It was mid-afternoon, near the police station, not far from the centre of town. They came up to him in a group, four or five of them.
“Got a light?” asked one.
“Got any money?” asked another.

“Nah, get fucked,” Rex said.
“Give us the money or we’ll do you over.”
“Get fucked.”
They beat him to the ground, kicking him as he lay there on the street. They took his money and his bag of clothes. They looked through his briefcase but left it because it was old and there was nothing in it they wanted.

Night has already fallen when I drive into town. “Not going any further tonight.”
“I got a mate who lives here,” he says.
With Rex giving directions, I drive into the suburbs. We pass row upon row of houses that all look the same in the night. Rex points up ahead and to the left – one of many amorphous grey houses. How does he know this one from the others? I pull over outside the house. The night is dark, rain still falling steadily.

Rex clutches his scuffed tan vinyl briefcase from the floor of the car. “Thanks for the lift.” He opens the passenger door and is gone.
As I drive away I catch a fleeting glimpse of him in the glare of a street lamp – walking bent-over against the rain.