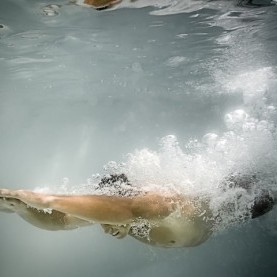 Everyone but Iris thinks her partner Connell has left her. Iris is convinced that something has happened to him. This piece is the first half of chapter one, where we are introduced to Iris in her present state of mind, with Connell gone for about three months. As the novel progresses, Iris discovers clues as to what might have happened to Connell, and she ends up in danger herself. There is much more to the story, both in terms of plot, including the sinister genetic research that Connell was investigating, and exploration of Iris' emotional state - her family background, relationship with Connell and how it had been changing in recent months, and the impact of her discovery that she is pregnant.

Iris stares into her bathroom mirror, and sees only emptiness staring back at her.

She turns and climbs into the bathtub – surrounded on three sides by blue-green tiles, tiny spots of black mould gradually colonising the grout between them. The hot shower eases her aching muscles.
Closing her eyes she sees herself, swimming up and down, up and down – in the aqua of a sea pool. Beyond the pool’s grey cement surrounds, the intense blue of sea breaks into white foam on dark basalt rocks. Her mind gives in to the rhythm of her body – arm up, breathe, arm down, leg kick, arm up, breathe ….

Iris imagines herself swimming along the wall where the sea breaks, feels it running over her back, into the pool, after a wave. At each turn of her head she notices the green-brown slime on the pool walls and floor. Occasionally a sea snail or another feathery creature glides into view, smoothly eating away the algae growing in this living soup.

Something slimy touches her. Jerking upright, she almost chokes on sea water. Catching her breath, she sees familiar long white muscular legs in red shorts dive under the water from the edge of the pool. She sees the long shape of him, shimmering along the pool floor, coming for her, and starts swimming, fast. Then she feels his firm grip on her ankle – struggles, squealing, laughing, spluttering as he pulls her back towards him. She feels him grab her around the waist, the warmth of his mouth on the back of her neck.

Breaking away, she twists around and dives under, quickly grabbing his ankles, before launching herself on him as he flails, trying to stay upright. She kisses him full on the mouth. Saliva and sea water mingle as they go under together.

But that was three years ago, over a thousand kilometres to the north.


The shower grows lukewarm. Iris opens her eyes, sighs and turns off the tap. As she towels herself dry, her eye catches the movement in the mirror. She looks at herself, and can’t believe she’s the same person who’d had all that energy, that joy. Who’d had that life. Her wet hair appears darker and longer than it is. It hangs lankly around her face, drips over her shoulders. Grey-blue eyes, lined with red, hiding in shadows, stare back at her.

There are no sea pools where she lives. In Hobart, in the indoor pool, the rhythm of swimming is the same, although here she follows a black against blue line. Up one way, back down the other, in the clear, clear water. Sometimes there are even little silver-white ripples on the pool floor, from sunlight reflecting on the water’s surface. Chlorine is the price she pays for her addiction.

There are no sea pools, but the sea is not far away, and she and Connell had spent every weekend they could there. Once, when he had dared her, she swam naked in July at Marion Bay – she will never forget the delicious all-over tingling that followed the initial shock, almost a burning cold.


With her hair wrapped in a turban, her body warm now in pyjamas, dressing gown and slippers, Iris slices cheddar cheese and tomato onto toast and slides it onto the griller – two pieces of her stand-by. Beyond the kitchen window, she feels the darkness waiting for her, and closes the curtains. Pacing the lounge room, towelling her hair dry, she stops every now and then to sip wine in front of the electric heater.

Shit! The smell of smoke coming from the kitchen wakes her from her reverie and she races to the stove, yanks the griller open and snatches off the charred remains of her toast. Aggghhhhh!!! she yells at the top of her voice as she throws them in the sink and turns on the tap. Smoke fills the kitchen and she runs to the door to open it and let in the cold, clean night air.

Breathing deeply, she tries to calm herself. Back in the kitchen she takes a tin of baked beans from the cupboard, opens it and takes it with a teaspoon to the lounge room where she paces, tin and spoon in hand, occasionally stopping to eat, or to sip wine.

Finally fatigue draws her down onto the couch, where she reaches for the remote control.


Next morning, at work, it’s an effort to keep her eyes focused; they feel like they want to wander up under her eyelids for a rest. She sighs: a deeply tired, deeply dissatisfied sigh, after a long one-sided conversation with a field officer about lack of resources. The thought of the phone ringing again defeats her: she takes the receiver of its cradle.

In the tea room, two of the water scientists linger over near-empty cups. They are looking at baby photos.

‘Makes all the sleepless nights worthwhile, doesn’t it?’ says the other, stifling a yawn.

Iris turns away from their contentment, makes her coffee and returns to her desk. The colours of a vegetation map stare out at her from an open file.

Eucalyptus amygdalina, Epacris impressa, Allocasuarina monilifera – these beautiful names she loves saying seem to float in front of her eyes; she can’t relate them to the stripes and dots on the map before her.

Maybe I should go to the police again.

The tension she had felt in the police interview room during her last visit comes back to her and she can’t help standing up and pacing as she had then, left waiting alone despite the obvious urgency she’d felt. The young constable who finally interviewed her had made no effort to hide his boredom. He hardly looked at her, just sat there fiddling with his pen on the table while she’d blurted out her fears, addressing them to the uninterested top of his head.

What would I say? I’ve said all I can, over and over, and they’ve done nothing. They think he’s left me.
Or that a bushwalker will find his bones one day.


Iris feels Connell’s presence often, even at work in her cramped cubicle, where his impish face looks out at her from its frame next to the computer. If she wanted to, she could hear his acerbic comments about her job – about her pitiful efforts trying to help farmers to protect the bush on their farms while the neighbouring block is being clear-felled. But she prefers not to listen.

She wonders instead where he is; follows the well-worn track to that day, three months ago.

The house was dark, quiet. Windows glared blankly out at her. Disappointment and annoyance carried her up the steps and through the front door. She paused momentarily to turn on the hall light, and then went through to the kitchen. No Connell, nothing cooking on the stove. He’d promised to cook a special meal tonight, just the two of them. Shit.

Iris opened the bottle of wine she’d bought to share with Connell over dinner and poured herself a glass. It was a Bream Creek pinot, his favourite. She flicked through the mail she’d brought in: nothing but bills and junk mail. Why doesn’t anyone ever write letters anymore? Not that she ever did, now that her grandmother was gone.

Putting the mail with the growing pile on the hall table, she wondered whether Connell was running late, or whether he was so involved in what he was doing he’d simply forgotten. It wouldn’t be the first time. As she expected, the standard message bank voice answered on his mobile – she’d bought the phone for him so they could keep in touch but he hated it, left it switched off most of the time.

In the bedroom, she pushed off her shoes and undressed, tossing her clothes onto the bed, then put on the loose pants and warm jumper that hung over the back of a chair.

Perhaps he’s gone out to the shack. Buggered if I’m going out there chasing after him, Iris thought as she picked up her work clothes to transfer them to the growing pile waiting to be put away, or washed. Picking up her jacket, she froze, poised over the bed as if she’d seen a snake there, coiled ready to strike. A folded note sat on the bed, her name on the front in Connell’s scrawl, underlined with a flourish. She picked it up and read.

Dear Iris
I’ve gone away for a few days to clear my head.
love
Connell

Iris felt the fine hairs on the back of her neck raise themselves up, little antennae alert to trouble. Goosebumps spread over her body. He’d never done anything like that before.

Why would he need to go away? Surely he’s not still angry with me? That was two weeks ago. Not that he had any right to be angry.