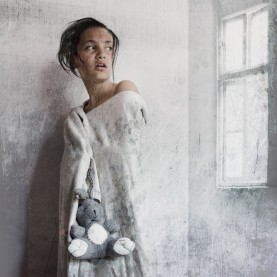 A girl is sent abroad to learn about her family's past...

The plane touched down at Carrasco airport in Montevideo. Over the grainy intercom, the captain announced the time of 7.08 a.m., with an outside temperature of 26 degrees Celsius. The journey had been fairly pleasant, with lots of movies to choose from during the thirteen-hour flight from Madrid. Louisa was lucky to have been sitting next to a couple who didn’t speak English. As the seatbelt sign disappeared and a sea of heads blended together, passengers began queuing along the aisle. Louisa smiled at her neighbours and wished them a good day in Spanish, much to their surprise. The teenager had been determined to play dumb until absolutely necessary, as she had been on too many long-haul flights with chatty people. It was no fun. Not for the listener, in any case.
The truth of the matter was that Louisa had quite an ear for languages, having spent much of her childhood listening to her mother conversing with various Latino friends.
Louisa shuffled through customs, before spilling out into the large airport terminal. It was unlikely she would recognise her mother’s friends, as she was terrible with faces and thought people always looked different in photos. Just as she began to think that she was stranded in a foreign airport thousands of miles from home, she noticed a couple in their seventies waving at her.
‘You must be Louisa,’ said the lady with a tanned face and a very similar scarf to the one Louisa thought she’d left behind in England.
Louisa smiled.
‘My mother has a scarf just like yours.’
The lady put her hand to her throat and gave a nervous laugh.
‘Yes, in fact it belonged to your grandmother. Your mother sent it to me after she passed away.’ She embraced Louisa warmly. ‘Welcome. I’m Margaret, and this is my husband, Peter.’
Louisa thrust out her hand and smiled awkwardly.
The heat of the sun had a positive effect on Louisa as she stepped out of the airport. Palm trees lined the pavement outside the terminal and bright pink bougainvillea added splashes of colour across the otherwise sterile structure. As they began the drive to the heart of the country, Louisa stared at everything around her, amazed at how she had magically been transported from dreary London to sunny South America. Geographical knowledge had never been her forte, but she did know that Uruguay was a small country compared to its neighbours. She knew little else about her new surroundings. Indignant at being ousted from her own home, the 18 year old had gone to extraordinary measures to show her contempt. Louisa had tuned out all information her mother gave her about her involuntary gap year.
The silver truck reached dirt tracks, which, as far as Louisa was concerned, marked the end of civilisation. A wave of panic swept through her. The road ahead was unknown and Louisa was starting to regret her ignorance regarding her destination. Her seatbelt felt like it was tightening and the strap was beginning to dig into her neck. She unfastened herself and opened the window. Unbeknown to Louisa, Margaret had been staring at her through the mirror of the passenger visor.
‘Don’t worry, dear, Villa de Maria is only 2 kilometres away now. You’ll soon have a chance to stretch your legs. The road is rough beyond the village, which is why we will stop at the garage to change the tyres.’
Her tone was comforting. Perhaps it was the mellifluous timbre of the lady’s voice which filled Louisa with reassurance. She was like a loving grandmother, someone Louisa wished she’d had around as a child.
‘I’m fine. Honestly.’ Louisa’s eyes were red, and before long her surroundings were blinded by tears.
‘Peter, would you stop the car, my love?’ asked Margaret.
The vehicle came to a gradual halt, and the teenager jumped out and hurriedly walked along the dirt track. All that could be seen were fields after fields. A desert of green. Louisa pressed the palms of her hands against her eyes, trying to control her emotions. The more she attempted to regulate her breathing, the more she wanted to cry. It was a losing battle. A reservoir of untouched tears had unexpectedly exceeded its flood capacity.
Margaret approached the weeping girl, put her arms around her and whispered, ‘Whatever is troubling you, Louisa, I’m here if you need to talk.’
She squeezed her tight and walked back towards her husband. They both looked at each other and got back in the car.
As Louisa stood in the middle of the road with smudged mascara and saturated cheeks, a wave of peace ran through her. She felt a sense of belonging. She welcomed the warm sensation which had taken over her entire body, starting from the tips of her fingers right down to the pit of her stomach, where the sickly discomfort was. The stomach pain which had followed her from Oxford suddenly vanished.
Out of nowhere, a hand took hold of her shoulder and a familiar voice whispered her name. Turning around to tell Margaret that she was feeling much better, the gaze of the sun dazzled her. She squinted and put her arms across her forehead to shield herself from the bright rays of sunlight. Louisa searched around, only to find she was alone. A cloud of dust swept the roadside, rising into the air and dispersing quickly into the nearest field, as though it had never been.
The mystified girl made her way back to the car, glancing around once more before opening the passenger door. Something quite weird had just happened, but she was not alarmed. In awe of the magic around her, Louisa felt a connection to her surroundings. She had taken her first breath of life in this part of the world. She was born not far from where she stood in the big city across the River Plate, Buenos Aires. Louisa knew she was home.