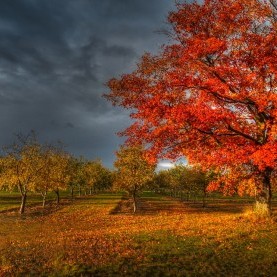 It was a sunny afternoon the air was thick with the sounds and smells of summer. Henry lent up against his favourite tree and looked out over the golden fields. As he did this he thought about all the times he had sat in this very place looking at this very view.

It was a sunny afternoon the air was thick with the sounds and smells of summer. Henry lent up against his favourite tree and looked out over the golden fields. As he did this he thought about all the times he had sat in this very place looking at this very view. He thought of his village, the village where he had grown up and then where he’d raised his children, and where he’d seen them raise their children.
It wasn’t the same now as it had been, but then who was, he thought as he brushed the flies away and felt his thinning hair. Even though some things have changed, there were some things that were ever faithful, ever present, like his tree.

Another thing that was ever faithful was the soul of his village, and at its centre was the town crest with the words beati misericordes quia ipsi misericordiam consequentur emblazoned across it.
When he was a boy he and his friends were made to learn it until it seeped into their very fibre, until it was part of their very being, as did every generation, as had all the people in his village, those that came before him and those that would continue after him. This is probably why the soul of the village had remained untouched even though other things had not.
While Henry looked out over his field he thought about the people that had been part of his life, part of his village.

He thought of Mr Gerard, the town baker. If you woke up early enough you could smell his bread while still lying in your bed, particularly in summer when the windows were open. Mr Gerard always made the bread for the village; all different types of bread, baguettes, fougasse, pain de mie, croissant, brioche; the variety seemed endless and abundant, he always baked more than he sold. When Henry was growing up he used to think this was careless of Mr Gérard; he knew what everybody bought: 5 baguettes for the Martin family, 2 Pain de mie for the Dupont’s, a Brioche for Mrs Brun. Everyone bought the same things every day. Then as Henry got older he realised that selling bread was only part of what Mr Gerard did. In the Autumn of 1954 when George fell out of his fishing boat, and couldn’t work for weeks, his family still had the same amount of bread every day often with a treat or two for their kids.
And at the end of each day Mr Gerard would put some of the left over bread in a basket outside his bakery, then he would put in rest sacks in his car and drive out of town, arriving back an hour or so later, with a seat full of empty sacks. When Henry asked him “Why” he said “beati misericordes quia ipsi misericordiam consequentur”.

As Henry continued to sit under his tree watching the world slowly pass by, he saw one of his friends trundle past in the beat-up, rusty old truck that he faithfully and lovingly cared for like one of the family. Fredrick and his wife Aimee owned the local café; they took it over when Fredrick’s parents could no longer cope. Along with the smell of fresh bread first thing in the morning, the smell of fresh coffee was also part of the morning routine. If the strong, fragrant, smooth, comforting aroma of coffee didn’t greet you then you knew something was wrong. And while the café served what was undoubtedly the best coffee anyone has ever savoured, it was only one part of what made the café in the village square so beloved by those who lived there. Just like his parents before him, Frederick and Aimee provided as much care for the villager’s souls as Mrs Lambert had done for their bodies. No matter what you were going through, there was always, a comfortable chair, a welcoming friend, a kind word and good coffee. If someone needed shelter, sustenance or support it was provided, no questions asked.

Henry remembered an accident that happened one winter a couple of years ago. It was one of the coldest winters they had seen in many years, so cold the river had frozen. Many of the children in the village had never seen the river like this before, but they had all heard the stories their parents would tell of skating on the river and so they decided to try. Henry would never forget the moment when Gabrielle came running screaming into the square. The ice had cracked. Alexander was stuck. The men in the village gathered rope and blankets, and raced to the river’s edge. They were able to drag him out of the water and warm him up, but it took months for Alexander to recover from the water and the cold. In the café, Frederick and Aimee, unassumingly helped the village support Alexander’s family. But more than that, they provided a place for people to meet and talk about what had happened. For Frederick and Aimee the café wasn’t just about coffee it was about community, it was about ensuring that everyone had a safe place where they knew they would always be welcome.
When Frederick’s father handed over the café to him, his final words of wisdom were “beati misericordes quia ipsi misericordiam consequentur”.

This unprejudiced welcoming of strangers that Frederick’s father had embodied for so many years, came as no surprise to Henry. It was simply what was done, what had always been done, by everyone including Henry’s parents.

Henry was only 8 when the war started, not that it affected him, his family or his village for a number of years. Their village was tucked away in the countryside and life remained as it had before, with villagers getting on with farming, or working in nearby factories. If they heard anything of the war it came from the newspapers or the radio. That all changed in 1941 when Jewish men, women and children started trickling in and by 1942 the number of Jewish refugees that were coming to their village seeking shelter had increased dramatically. The villagers all welcomed the strangers into their homes. No one was ever turned away and many stayed for months, even years, sharing the villager’s homes, often becoming part of the village themselves.
Henry remembered one cold, dark evening when there was a knock on the door. Henry’s father answered it to find a cold, wet and hungry woman with three children. His father hurried them in and showed them into the bustling kitchen where they could get warm by the fire. Henry’s mother gathered together some bread and meat with vegetables from the garden and made them a meal. Mrs Rosenberg and her children lived with Henry’s family for 6 months; Henry spent many wonderful hours playing with her son Eliot, often climbing his tree; it was like having a twin.

Then in the summer of 1943 two police buses came roaring into their quiet village. Police prowled up and down the narrow cobbled streets searching everyone’s homes, but they found no refugees. In desperation the Police Captain rounded up all the men in the village, and held them in the Square. Henry remembered hearing the Police Captain demanding that the men tell them where the refugees were being hidden or they would be arrested. This went on for hours, but the men kept silent. The following morning the buses left with no refugees and no prisoners. Many years later when some of the old men were talking about what had happened they all said the same thing “when they needed the strength to carry on they looked up and saw the words “beati misericordes quia ipsi misericordiam consequentur”.

Life was so different now, but there are things that never change, some things that were are ever faithful, ever present, like his tree. Every year in July the village held its vibrant, colourful festival full of sun, food, friends and wine On that special day the sun seems to last forever and when it finally slips away the party continues under colourful lights and lanterns making the town look magical. It brings everyone together to celebrate the people and events that have shaped and moulded them as people and as a community. It reminds them that they are all here for each other to be cared for and also to show that same care to others.

Every year as the village clock strikes 8 on the night of the festival, all the villagers gather together and say the words on the crest “beati misericordes quia ipsi misericordiam consequentur”.

This year Henry’s granddaughter Rosa asked, “Papa, what does that mean”, Henry replied “Blessed are the merciful, for they shall receive mercy.”