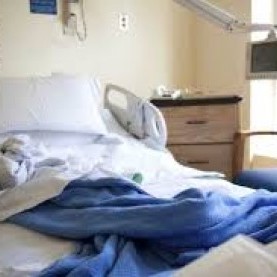 A boy is forced to meet the father who abandoned him after his mother requests to see her husband one last time before she dies.

I knock on the threatening greyish-black wood. Plain, hard, hollow wood. There is a knocker, but no one ever uses the knockers on doors. As the door turns, I take a deep breath as I know the door will reveal someone in my life who I only know from a single family photo but should know by loving memory.

My younger brother sleeps on the other side of the cramped bed. His soft snores, constant intake and outtake of air soothe me. The sporadic gunshots outside make my ears rings, and my fear spike every once in a while. The bullets never pierce these cheaply insulated apartment walls or sound even remotely near the house, but that isn’t my worry. As I listen to the intermittent silence, I wait for that one sound to allay my fears. Just as I start to feel actual fear in my stomach, I hear our apartment open, and I exhale without realizing my breath had been held captive by my 5 year old lungs. I hear the keys dangling as she dumps her heavy bags on the floor. I hear her ascend the stairs, creaking on the 4th one. She is only a couple of steps to the bedroom door. She opens the door quickly, so the hinges can only creak for a split second. I close my eyes pretending to be asleep. She lifts the blanket, and gently shoves me over to my brother’s side of the bed, where she wraps her arms around us. I open my eyes momentarily to clear some dirt. Just as I start to relax, I think that it must have been a hard week for mama. She never goes straight to sleep. The last thing I see before my eyes close is the family photo.

The man I see in the doorway, is definitely not my father. He’s about 40 years old, grey hair, clean shaven, combed back hair and a pair of pants which did not fit with his sweater and odd scarf. Not that this man looks like he cares. Those are some expensive names he has there.

“What do you want, Sir?” he said it in a British accent, with a smug and impatient curl of the mouth.

“Why do I need an appointment?”

“The master does not like visitors.” As he was saying this, a more fashion aware, less snobby looking, older version of the previous man appeared from behind him, tapped him on the shoulder, and the odd looking man left the doorway.

“Hello young man, how may I help you?”

“I’m Arthur Gibson” When he heard the last name his face drained of colour. After a couple of moments, he collected his composure, and said:

“Why? Why did you come? To torment me from what I have? I am a man, I have a life, and kids aren’t a part of it. I never felt any attachment to you, your brother or your mother. It was a one night fling that turned into a mistake of a relationship. When I realized I had two little children I couldn’t believe it. I never meant for anything to happen. I couldn’t continue. I couldn’t blame them on any one else like I had with so many others before. I knew she didn’t need them to get a DNA test. They had that curl of blond, that flat chin, they had the grey eyes-”

“My eyes aren’t grey.” He turned back from the wall he was yelling at and walked to me and stared at my bright golden eyes.

“Why, it was… All my parents… its not possible. That was the family trait… passed down to me…” He stared at me, or rather my golden eye colour. It was unnerving to see this man, who I reserved so much hate for, yell at me angrily, when it should be the other way around. He was the one who neglected me.

“I know what you’re like. Mom told me all about you. How you’ve acted. What you’ve done. I don’t care. I don’t want an explanation. I accepted the reality that you don’t want kids or burdens to deal with. You don’t want responsibility, you’ve shirked it your whole life. That doesn’t matter to me. The reason I’m here is because of my mom. She is dying of leukemia, she doesn’t have a blood match, and she will die. She said she wanted to see you before she was gone. She is in her last days, grant her this last wish.”

His resolve slowly shifted from that of stubbornness and anger to tiredness and sadness.

“The hospital is on the other end of town. About a half hour away.”

A quiet car ride later he pulled into the hospital visitors parking lot. It was filled with all sorts of cars, dingy, old ones, minivans, fender benders, and posh expensive ones. Gold, red, blue, grey. They all seemed to be crying. It was raining. He got out, and without regard to his designer shoes walked through the muddy puddles caused by the tears of rain. His face looked old. He started to look older. All the makeup was being washed off by the rain and it left his face very wrinkled and white. Without all that makeup his face looked similar to mine. He went to the front desk and asked for a Jasmine Gibson. He remembered the name. Floor 5 as always. Ward 72. Bed L. We went into the freshly elevator. Its floor had gold tiles, and doors painted dark grey. I got in. I hit number 5 and realized my father hadn’t stepped in yet. He stood there, eyes pained, head staring down, I held the door open for him, waiting for him to make the choice to come by himself. He stood there for a while, before someone came wanting to go up and he had to come together with me. We stood there in the elevator. The person got off on floor 3. When we were alone together, he asked:

“Why? Arthur, Why?” There were a number of different questions that needed answering in this case. I understood all of them, and had for quite a while. All those nights spent thinking about my father and the history. She never kept it from us. She made sure we knew who and where we came from. It is because of this that I was able to answer him before, and can answer him now as if I had known him for many years.

“Because the only thing which was fake was what you put on the outside. You really loved her, you loved me, you loved all of us. You just couldn’t grow up.”

The elevator pinged. I let the doors open, and I let my father find the way. We passed many doors, all with their own story, all with their own original hope and ultimate sadness. Door 72. There were many doors which we had to walk past in order to reach door 72. He kept walking. I grabbed his hand. He looked sadly at my hand then at my face, then at the door. He opened it. We walked hand in hand, his squeezing mine. We passed bed F. He was starting to shake. His hand was squeezing mine tightly. I looked at him. He looked at me. He stopped squeezing my hand and let go. We walked past the last few beds together until we reached L.

He slowed his walking. He looked at the bed. The frail body there. The heartbeat monitor still making feeble beeps. The pale yellow hands, with very little flesh left on them.

“Eddie? I can’t see you… come closer.” He took those slow fateful steps towards the bed. He leaned over and looked at her, into her golden eyes.

And with a quickness astounding for someone on the brink of death, my mother, with her last reserves of strength, hooked her arms around my father’s neck, and kissed him. The she fell back onto her pillow and closed her golden eyes into the grey darkness of the void one last time. The heart beat monitor showed a straight line. It beeped a single note. Several nurses rushed over and began post mortem preparations. Through the chaos my eyes, already blurring from tears, saw, with one last moment of clarity, my father’s tear streaked face, and his eyes which had turned the golden colour of forgiveness.