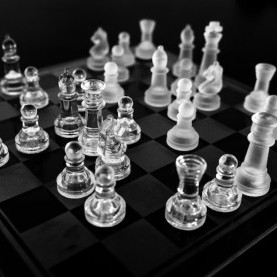 As a man suffering from obsessive-compulsive disorder, Silas is imprisoned by his own anxieties. When he begins to fall in love with a new co-worker, Silas begins to question how much control does one man have over the world around him.

Silas stared into the dark bedroom. A dreadful stillness festered before him that would only be broken by the passage of time. Light barely thought to breach through the windows and layers of curtains separating him from the outside world. For the next seven hours he was truly alone. He was confident he would be able to survive the evening's horror. The true question was, how much rest would he get tonight?

Rest, not sleep. Such a distinction was necessary for Silas. Sleep, in his mind, was overrated compared to a peaceful night. Instead of peace, tonight held the same caustic silence he had come to address as normalcy. Silas stared into his darkened bedroom overcome with immediacy.

"So it begins," he murmured as he took his first fevered steps toward the unmade bed that seemed at this point miles away.

The first step was a commitment. Not that his hallway was any safer, but he was now in the thick of danger with a simple cross of the threshold. That first step triggered the near-religious calisthenics routine that Silas endured every night. The second step marked the pace. Silas's compulsions depended on a harmonic division of fours. He wasn't really sure when it had started or what would happen if he refused, but it was painfully necessary despite his rationalization that the universe simply did not care how many steps it took him to reach the bed or how many times he touched the nightstand.

Unceremoniously Silas landed the third step. A minor cramping of his tired, out-stretched muscles forced Silas to contract his extended lanky leg inward a bit too quickly landing his fourth step. Damn! He was just shy of being close enough to the bed. The futility did not go unnoticed, as with every evening. Silas released the muted scream of a man disgusted at being caught in a battle between the childish pageantry he found himself in and the assailing itch that would force him to start over.

At least a little luck graced him tonight. The remote was sitting next to the tv itself, atop a pillowy throne of paired socks yet to be put away. What a relief to have noticed it now rather than a minute or two later after he was tucked safely in bed. Silas was incapable of sleeping in the dark. Like a child, every noise and shadow in the dead of night was a torment. His mind raced and breathing escalated at the most irrational of thoughts in the pitch black. Since nightlights were exceptionable for twenty-eight year old men, the television was his bright beacon of salvation. Cartoons and informercials were best. There were few surprises there. He had favorite nighttime programs that he had come to know as comrades. He had bonded with them in the dead of the night on his quest for sleep, forming a special covenant together. Silas knew that if he could just make it to 5 AM, Chuck Rainier would be there informing the world of the latest kitchen gadgets they so desperately needed while simultaneously watching over Silas as his personal sentinel.

Silas succeeded in his hypnotically forced foxtrot to the bed and tucked himself in with purpose. The easy part was over. All that remained was to actually attempt to fall asleep. He had long since learned it was wise to turn his alarm clock so that he couldn't see it mocking him as it counted the hours of his failure to do what so many others found so simple. He touched the four corners of his pillow methodically, hermetically sealing away whatever form his fears would take that evening, and let out a sigh of completion.

Tomorrow would be the same as any other work day. The first hour or so would be the same scripted routine, easily pantomimed as Silas blinked back to consciousness. The autopilot morning behavior of the office worker was customary for him and his brethren of desk jockeys. Blank-faced, filing through a maze of cubicles toward a smoldering coffee pot, then shuffling back to their respective pod to await their caffeinated prize. He had to learn to apply himself more, present his superiors with a new and invigorating image of himself, something ripe for promotion. Despite his compulsions and lack of sleep, his work was quite promising, but he had not made enough of an impression that he was worth more than his current droll salary.

Silas slipped away across the rationale-excluding border between awake and dreaming, from momentarily reflecting on tomorrow's work day to suddenly being a cowboy on Mars. The dream world for Silas was infinitely magestic and perilous. He envied the people who simply had dreams or nightmares. Here, Silas would blend the two combining the most fanciful and sincere with all the fear and anxiety he could muster. One thing that always amused him, even in his darkest nightmares was how his appearance was never truly static. The pale, often unshaven complexion, baggy brown eyes and shaggy black hair that belonged to his corporeal self were ever-changing in this world. Here, he may have a blue mohawk and bronze skin, or no hair at all. It was probably just another manifestation of his subconscious trying to process his stress, desires and doubts. Still, sometimes Silas could look at his dream self's reflection and mold his features as he saw fit.

Riding across a dusty foreign wasteland with twin pistols at his side, Silas was content in his adventure. Suddenly, the ground began to give way and a great maw of sand and rock was attempting to swallow him and his steed. Silas shot at the alien monstrosity ineffectually. He felt the beast below him being ripped away, hearing its screams as it succumbed to death. Silas felt himself being drawn downward, grabbing one of the magnificent rock teeth in a last ditch effort to survive --

Silas awoke gripping the pillow for dear life. He was back in the bed, neither really feeling safe nor sound but at least back to being grounded. He situated himself and calmed his breathing. He closed his eyes a moment and was relaxed once again. The sheets had opened slightly in his tussle with the sand-maw, leaving a draft at his feet. Silas sat up to swaddle his feet back into the safety of the blankets when he saw the grey figure standing just inside his open closet. Its features were obscured but the pale blue hues from the television accented its moist grey skin and the sheen of its black eyes. He gasped as he flung the sheets and pillows into the air. Bursting out from the confines of the bed, such easy hunting grounds, Silas lurched for the night stand and turned on the lamp with expedience.

There before him stood nothing. Absolute nothing. He could not even justify his eyes' betrayal with some haphazardly out of place hangers or a long coat, anything that would provide the illusion of a figure standing in the closet. No, he knew in his mind what was really happening. He picked the pillow up from the floor and gripped it tightly, taking careful steps to caress the four corners in his familiar pattern that would sooth him. The lights would remain on tonight.

The uncomfortably sick truth that Silas understood was that the only thing to fear was himself. He was the jailor of his own haunted prison and every evening he'd find some new manifestation to taunt himself to mad damnation.

Silas awoke that morning to the sounds of a heavy kitchen mixer whirring on the television. Chuck was on watch now. For the first time all evening, Silas found himself in a state of comfort. He'd only get less than two hours at this point, but he would be safe now. The grey intruder in the closet was still on his mind, but he knew the rules fashioned to hold his torments at bay and this one would be no different. He would be safe in the fore dawn and could let his guard down. If the figure returned tomorrow though, he would have to name him, assign him a place in his mental index. His eyes drew to the dim closet as he closed them tranquilly.

"Joram," he whispered. "Joram the grey."