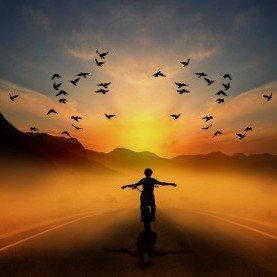 A few seconds in the head of the misunderstood.

I look for the person, and my foot slips off the ledge. All my weight plunges downwards like a sick rollercoaster ride. It’s funny when you think about it. I didn’t want any of this. I didn’t want to be on that ledge in the first place. I guess that’s what happens when you start thinking too much in the future. You need to think about the here and the now. It’s not about next year. It’s not about next season, month, week, day, hour, minute, second. It’s about this moment right here. You need to understand that it’s all about what you are doing now. It’s important to think about what you are doing in the here and now because it doesn’t always sink in what you are doing now. You don’t think about other people in a moment. You think just about what yourself and what you want. You become the most important. That’s what people should be trying to do more.
My stomach feels like it is entering my throat and I start to think of everything that I’m going to be losing. It’s not always about what other people want from me, but what I can do and expect from myself. My parents want me to get good grades, care about school, and go to school in a good career field. What do I want? I want none of that. I just want to enjoy what time I have here. It’s kind of trivial now, I get a sinking feeling in the pit of my stomach. I felt all of this pressure on my chest, but all of the pressure off of my chest is now sitting in the pit of my stomach and I don’t know how to make this feeling go away. It’s the weight of all of my unanswered questions. The weight of everything that I haven’t finished. Pushing down in the pit of my stomach making me want to be sick. Either that, or the fact that I’m terrified of heights. Nothing seems to be going my way.
I wanted something quick and painless, but this seems to be taking way too long. I think of all of the things that I wish that I did. I think about all of the things that I should have said. Things I should’ve done. Things I should’ve seen. Particularly my parents. They wouldn’t understand why I was even up there in the first place. It’s not like I really wanted to deep down jump, but I just wanted to see what it was like up there. See what my thoughts would’ve been like. Who knows maybe at a later time I would have willingly taken the dive, but here I am falling a few stories down to the concrete sidewalk. All alone. It reminds me of how I started out all alone. When it was just me, living in Ignorance only looking out for myself. That was when I was the freest I will ever be. When I am alone, worrying about myself. The problem with worrying about other people is that once you start you can never stop. There are over seven billion people on this planet, and if we thought about all of them all the time, then there would be no time to think about ourselves, and if we don’t think about ourselves then nothing would ever get done. Nothing would ever be achieved without a desire to better the world primarily for ourselves.
I know that right now it might be strange to be thinking about other people. Especially because I feel so strongly that people need to look out for themselves primarily, but I can’t help but wonder what is going to change when I’m not there. I wish I could see what everyone’s life is going to be like without me in it. I guess that that is something that I won’t be getting the luxury of seeing. If only I could see who would really care. If only I could stop this plunge. I was too rash and I didn’t really see the consequences of my actions. I was thinking all about the future almost as if it was set in stone and certain, but I know that it isn’t certain because it can’t be certain because the events that have led up to that moment haven’t happened yet. My shoe not quite fitting on the ledge literally changed my entire future. It turned it from something that was going to last many long happy years to something that wasn’t going to last for more than a few frightened momen