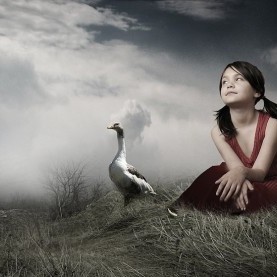 Rosamund and Peter Quentel agree to help William Tyndale print the first English manuscript of the Bible, but they find themselves facing dire consequences with the Church.

Rosamund’s husband burned with the power of words. He spoke of it with that wildfire in his eyes; he had an intoxicating way of speech, an enthusiasm for the manuscripts he printed, sheet after sheet, until his fingers were blackened with ink and his skin was covered with parchment dust. His wife had married him for that fire in his eyes. She did not marry him because she understood his love of words or because she prized his printing shop. Over time, however, Rosamund learned that one could not be married to Peter Quentel without adopting his fervor for printing, and it was not long before she found herself working at his side, helpless in the whirlwind of his infectious passion.
As Rosamund worked alongside the man she loved - sharing his ardor in her deep brown eyes, staining her blond curls with ink - she failed to foresee the payment that her husband’s fire would demand.

The summer of 1525 found the Quentels in Cologne, Germany. The city was still a mangled mess of cobblestone streets and narrow buildings. Tall rows of shops and homes held one another up by glum, mutual agreement, and at night the city was laced with fogs that spread from the Rhine.
It was on one of these quiet summer nights when Rosamund found herself standing in the middle of her husband’s printing room. The floor was painted with a mess of torn paper, ruined typesets, and spilt ink; the broken printing machine was covered with half-mangled, half burned manuscripts. A few tables were overturned, and glass sprinkled the floor beneath a shattered window.
“How did they find out?” she whispered, her voice crumpling with shock.
“I don’t know!” Peter wildly replied. He was on his knees, scrambling among the sheets that fluttered round his shop as a breeze tossed through the broken window. Words…the air was filled with dancing words, painted on white ghosts…“Rosamund, we have to hide the papers –“
“How did they…”
“Just help me – Rosamund!” Peter stopped his frantic work to shout at his petrified wife. Rosamund’s eyes were flickering with a horror that disconnected her from the present. The shop used to be her haven; it used to be filled with delight, joy, and passion, as they printed words and lived on dreams. Now it was the slaughtering grounds of their hard work, and Peter was on his knees among the wreckage…she heard him shout at her, but she could not respond to the present…she could only remember the five weeks in the past.

“You’re both mad,” Rosamund had whispered as she read the letter in her hands. The dismay in her features was deepened by the liquid shadows of candlelight.
Rosamund’s husband was a master of words; he was the craftsman who displayed them – but this…this was madness, to accept such an offer. Her head roared with a rush of blood as her eyes burned with the image of the letter; she struggled to wrap her mind around the words in her hand…the words one insane Englishman had written to her husband.
Peter saw the palpable terror constricting Rosamund’s features and reminded himself that he alone shouldered the blame for her distress. “I wanted to keep you out of it,” he explained softly, “but I…I just couldn’t. I want you to help, Rosa. I need you to help me print this.”
There it was. That fire again; she could see it in his eyes. That was why she had married him, but now the sight of that spark did not kindle her own…it only unleashed cold, plunging despair, down to her bones.
“Rosamund!” Peter shouted.
The printer’s wife was torn violently from the memory. Her eyes focused back to the present; her hands were trembling, her high, fair cheekbones were flushed with anxiety, and her calloused palms were laced with sweat.
“Peter… ” Her whisper was severed with dread. She could not vocalize the blackness that was behind her eyes: the irrevocable knowledge that they had been betrayed, and that they would be found. “Peter, what…what are we going to do?”
The printer saw that his wife was stiff with shock. It was his own fault; he had always had the gift of persuasion, and he had spoken with such conviction, not five weeks ago…

The signature of William Tyndale had flashed once beneath Peter’s gaze before he held the letter up to the candle’s flame. Tyndale was a heretic of the Catholic Church and a fugitive from England; any printer in his right mind would have burned the letter as soon as it arrived – but Peter Quentel had kept that letter. It was an appeal from William Tyndale, written in strong, bold print…every set of words has its own flavor, and Peter had never tasted such scalding, bitter words. Tyndale had requested Peter to print the English New Testament.
“Try to understand, Rosa,” Peter began to plead. “English is the great language of the world – it is the medium of communication – yes, the Bible has been translated before, but no one has dared to print it; have I managed to teach you nothing of the power of words?! If you could just open your eyes, look beyond the fear - ” he spread his hands as he said, “We can print it faster than a hundred scribes and their handwritten copies! Imagine the gospels, being read by common people like you and me!”
Protestants of the Reformation were burned alive for even owning the English translation, and Rosamund tried to remind her husband of this fact as she stared at him in choked silence. “Why?” she had whispered. “We always print in Latin, Peter…why challenge the Church now?”

The door of the workroom slammed open against the adjacent wall, making Rosamund jump from the memory. William Tyndale himself rushed into the room. Peter leapt to his feet and sent more papers fluttering through the darkness…papers scarred with dangerous English words – parables, words, verses of the Bible. “They’re coming!” Tyndale panted, his crazed brown eyes alight.
William Tyndale had been living in secret at the Quentels’ press, translating and printing with them. Germany was more tolerant than England…for a while. Tyndale had worn out his welcome in Cologne. The destruction of their shop during Sunday Mass was a warning of the finite price on their heads.
Rosamund barely noticed that Peter was shoving papers into a satchel while the old man tried to persuade the Quentels to come with him.
“Nein, I cannot go, this is my home – my work – ” Peter shook his blond head frantically.
“Peter, don’t be insane,” Tyndale hissed. “Think of your wife!”
Livid shouts in German began to fill the street in front of their shop. Tyndale glanced at the printer’s wife; she was fixated with raw disbelief, staring at Tyndale with the wounded accusation in her eyes: you brought this upon us.
“I will not leave you, Quentel,” Tyndale insisted, seared by the woman’s stare. “I have brought this upon your house; I am to blame.”
“I brought this upon my house,” Peter corrected, fiercely. “I chose to be part of this, Tyndale – my wife and I said yes, and we could have said no – I wanted this, do you understand me? You owe me nothing, William; it is I who owes you – ”
“What could you possibly owe me for?” Tyndale demanded. He heard the front of the shop breaking in, splintering beneath the weight of the Church.
“One day,” Peter said, his German features carved with fervor, “everyone will be free to read the Bible in their own homes, in their own language. You need to live, Tyndale – live, and make sure that it happens.”

Rosamund had married Peter Quentel for the fire in his eyes. He had taught her how to burn with that same fire, but neither of them had dreamed how dearly they would pay for their passion.
Anger filled their shop with harsh German voices…blinding golden torches…Rosamund and Peter were dragged from the printing room as their house was gutted and razed. Rosamund closed her eyes against the chaos and tried to remember what Peter said that night they began to carve typesets for Tyndale’s translation. What did he say? What had he said?

Peter had laughed.
He had laughed his intoxicating laugh; he wrapped his arms around his wife and spun her around, sending papers of the hunted English New Testament soaring through their tiny little workroom. “One day, you’ll see, Rosamund; one day you’ll see how much this means to the world.”

William Tyndale survived that night, but the printer and his wife did not. Many more years and many more lives were spent before the English translation of the Bible was published freely…but Tyndale dedicated the first completely printed copy to a German printer from Cologne, named Peter Quentel – for many may burn with the fire of words, but few ever pay the cost of their flames.