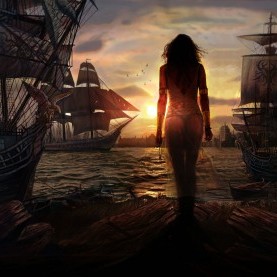 A girl with the ability to bend the elements must sail into the unknown in order to save her people.

Emery sprinted towards the village as fast as her legs allowed, ignoring the twigs and branches that snagged at her hair and ripped at her tunic. She tripped once, but barely hit the ground before she was back up again, running headlong through the foliage.
By the gods, this cannot be happening.
When she finally burst onto the island’s sandy shore, there it was: an outsider ship, in their bay, moving through the water as serenely as if it belonged there.
Most of the villagers spotted the ship as soon as it entered the bay, and for a moment, the same moment she skidded to a halt in a flurry of white sand, a stillness fell upon the island like a calm before the storm. Her people stopped whatever they had been doing – frolicking in the bay, sitting in the sand weaving mats, practicing with their staffs – and stared. Nobody moved. Nobody made a sound. It was so quiet she was certain she could hear the thundering heartbeats of every single person on the island, including her own.
A shriek pierced the stillness. And then another. And then people ran. The majority of the villagers grabbed their loved ones and dashed for the trees, seeking the safety of their homes beyond. The rest stayed where they were, shocked, silent and still.
Emery stayed on the beach. Running was pointless. The damage was already done. If the outsiders had not known about their existence before, they definitely did now.
The villagers who remained standing in sight began to cluster together. Some clung to each other, while others pushed the elderly and the young behind them. Emery was shoved back as well, but she squeezed out of the group and stood off to the side. She swiped a shaking hand across her sweaty forehead and watched the ship as it navigated through the bay. It moved as if it knew exactly where it was going.
Her long hair whipped her face as the wind suddenly shifted. The sand beneath her bare feet began vibrating and the water at the bay’s edge started to froth. If there had been any fire around, it would have been acting odd too. Emery’s people were causing this. They were reaching out to the elements, manipulating it to their will, ready to strike. She had never wished for her abilities to awaken more than at that moment.
She held her breath, waiting for the battle to erupt. The ship sailed quietly along, the elements roiled with energy, yet nobody made a move.
Shock more than anything kept the villagers from attacking the ship, she was certain. Shock, and curiosity.
A small splash appeared near the side of the ship, and the vessel stopped moving. It floated on the water’s surface, staring at them as if daring them to run. Emery squinted at the ship, but it was too far away to make out any great detail. A second splash, and a smaller boat dropped into the water at the ship’s side.
The villagers watched, still silent and wide-eyed, as the boat headed toward the southern edge of the bay. It wedged itself onto a small patch of sand closest to the Gap, a place where the villagers never wandered. That patch of sand was where the Arch-Elemists’ tree grew, and no one disturbed the Arch-Elemists.
The outsiders, however, did not heed this rule, most likely because they didn’t know it. How could they?
Emery counted three outsiders in the little boat. Two of them disembarked and headed straight for the Arch-Elemists’ tree, as if they knew exactly where they were going, as if they knew exactly who lived there.
The villagers collectively stepped forward, throwing their hands in the air, the need to protect their leaders snaping them out of their shock. Emery stepped forward with them, but her hands remind balled into fists at her side. There was nothing she could do. She had nothing to fight with.
The ocean before them reared into a monstrous wave. It hovered, reminding her of a giant serpent eyeing its prey, and then shot straight at the outsiders.
But the wave did not reach its target. The water appeared to hit a wall, as if someone had solidified the air just in front of the outsiders. The wave crashed into this wall, and fell backward upon itself with a roar that seemed to echo the ocean’s defeat.
A man standing next to Emery stumbled sideways, nearly colliding with her. She grabbed his elbow to steady him. “What happened?”
The man’s face was white as tree bark. “They stopped it…”
Emery didn’t know if he meant the Arch-Elemists, or, somehow, the outsiders. Which would be more alarming?
By this time the outsiders had made it to the Arch-Elemists’ tree unscathed. A gaping hole appeared in the side of the tree, and for a split second Emery wholly expected the outsiders to be thrown backward from the force of the Arch-Elemists’ angry power, but that never happened. Instead they marched right up to the opening, and disappeared inside.