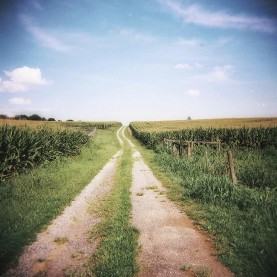 A teenager kidnaps someone and tortures them in a cornfield.

Thump. Thump. Thump.
The dull strumming of an unknown instrument acts as a metronome to the classical music guiding the car along. I release the gas pedal and drift onto the side of the barren and forgotten road. I check all of my tires to dismiss the possibility before cracking open the trunk.
“Room service,” I say to the man who’s supposed to be drugged out of his mind. “You rang?”
“Mmphf!” his red face puffs up like a blowfish in effort to get the sound out. I grab the roll of duct tape and wrap another layer around his head.
I consider drugging him and venturing further into the boonies, but the area surrounding us is desolate enough. I put my hand on his shoulder and lead him out of the trunk. He tries to hop away but ends up face-planting on the road. What a poor soul.
I lift his legs up and pull him into the cornfield, scraping his face on the ground as we go. I make sure to stop every few paces so that his face doesn’t become frictionless.
Once we are far enough away from the road I grab an ear of corn and shove it where the colloquial term suggests corn should go so I don’t have to deal with a mess later on.
He rolls over onto his back and breathes what I determine to be a sigh of relief through his bloody and broken nose. I tape him to the ground horizontally several times and take off his shoes and socks.
“This is the first knife I ever owned, John,” I say, flipping it open for him to see. “Do you like the flames on the sides?”
He squeals. I think he likes it. He’s practically writhing with excitement. Or maybe it’s fear. It’s kind of hard to tell, from this angle.
“Aron, what are you doing?”
I turn around to look at the addresser.
“Go away, Ma. I’m trying to torture John.”
“I thought you outgrew this, Aron. Why can’t you be more mature, like an adult?”
“No way, adults are boring.”
I turn back to John and insert my knife into the ball of his left foot. Now he’s really excited.
“Well, at least let me help you,” she says, brandishing her own kitchen knife.
I scoot over so she has room to bloody John’s other foot.
“This reminds me of when I was a kid,” my mother says, smiling nostalgically.
“What? You did this when you were a kid too?”
“Oh, I did lots of things as a teenager. You’d be surprised.”
“Wow, Ma. That’s pretty cool.”
“Yeah,” she says, twisting the knife in John’s foot so that he shivers with delight. “But I’m older now and I have a lot of responsibilities, like you!” She pinches my cheek, and then pushes the knife further until it comes out of the top of his foot.
I roll my eyes, brush her off and concentrate on the foot I’m working on.
“Why’d you follow me here?” I ask at her sideways.
“I just wanted to make sure you weren’t doing drugs. You know they’re bad for you right?”
“Yeah, I know Ma. I’m not doing any drugs.”
“I’m proud of you,” she says, putting a hand on my back.
Then we finish off my brother.