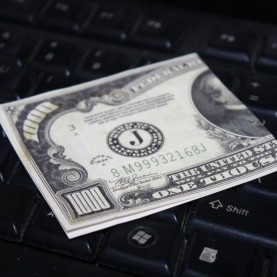 When parts of speech try to take down a Federal Reserve Bank, things can get pretty tense. In this short thriller, time is on no one's side.


Past, Present and Future walked into the bank at 9:01a.m. It was tense.
Past was shitting himself and Present senses it.
“Calm your ass down, Past,” he murmurs. “You were fine yesterday.”
“Yesterday I wasn’t standing in a federal reserve about to take the joint down,” he whined.
Future is about to crack it. “You’re gonna do this, Past, or I’m gonna take your hammer thumb and stick it so far up your ass you’ll taste it! Now, I’ll walk over to the bank manager’s desk and wait for your signal.”
Past wasn’t buying the reverse psychology Future was dishing. He saw too many movies where bank robberies ended up in a bloody shootout in the streets. Trying to force those images out of his mind, he walked over to the teller with acute trepidation.
Present stands in wait at the doors. He’s wearing aviator sunglasses and a red wig parted on the side. Mentally he practices his moves.

I’m spinning on my heels, grabbing the sawed-off shotgun from my coat. I’m stuffing the jagged barrels up the nostrils of the security guard. He’s nearly having a heart attack. I’m yelling in his face at the top of my lungs, “No one fucking moves or this cunt gets it!”
Past reached the teller’s desk about five seconds after Present’s mental précis. Past bent down, untied his boot and pulled out a can of mace. He glanced at Future who is about to engage. Past stood up, and in one swift movement he sprayed a long stream of pepper spray across the faces of four tellers who grabbed their eyes in agony, screaming confusedly.
Present has the shotty up the guard’s nose and takes the wanna-be-pig’s .38 from his holster.
Future yells, “I’m going to ask all of you to stay calm and just do what we say!” He won’t take shit from the smarmy bank manager trying to rationalise with him. “I KNOW you’re not going to try and talk me down from this…Jerry! I will have too much money and too much time after this job to let someone with a name like that tell me this shit is wrong! Now, you’re gonna walk me over to the vault and do what I say or Present shoots every last one of your sweet tellers.”
Past fucked up. While jumping over the counter his thumb caught the edge, and he sprayed himself with the mace then smashed his face on the corner of a desk on his way down. He lay on the ground with the writhing others, out cold.
“Past!” yells Present. “Where’d you go? Past!” Present is freaking out. “Future!” he yells. “Future, I think Past is out.”
“Fuck Past! Look at me. We’re going to do this with or without him.” Future is about to clock the bank manager over the head when the vault door finally clicks open. “I will ask you to step the fuck away now.”
Present is looking around like a pigeon in the park. He sees some of the tellers starting to recover from the mace, half-standing behind the counter.
“Sit your asses back down!” he yells. “Future! How we doing?”
“We’ll be rolling in thirty seconds!”
“What about Past?” asks Present.
“We’re going to have to leave him.”
“What? I can’t do that, Future. I’ve got—“
“Do you wanna end up like him? If you wait around that’s what’ll happen. Now in exactly 30 seconds we will walk out those doors with six million dollars cash and fuck me if I’m gonna let Past play on my conscience. You in?”
Present is panting, his eyes still darting, his shotgun still holding up the guard. He’s staring at Future, thinking of how easy life will be with all that dosh, sitting on his own Caribbean island sucking back Piña Coladas with a harem of island girls catering to his every need. Present is lost in thought when the bony elbow smashes through the bridge of his nose which immediately gushes thick, grainy blood down the front of his shirt. The security guard maintains his assault by spinning out of Present’s grip and yanking the shotgun from his hand. He figures he’ll backlash Present with the butt of the shotty then run with a flurry of buck shots at Future in the hope that the spray of shrapnel will catch Future full on in the face.
The guard’s first strong step, meant to propel his body forward at full speed, slips on the thick puddle of blood, forcing his leg high up behind the back of his head and forcing his head face-first into the pool o’sangre. Upon impact, the butt of the shotgun hits the ground, firing a blast that leaves a wide circle of splintered pre-fab in the teller desk,
If future runs now he’ll make the door with the six million slung over his shoulder before the guard can stand up and get off another shot. He’ll head-butt the manager, reducing him to a crumpled mass, then run straight at the rent-a-cop while unloading shells from his semi-automatic in quick succession.
Outside the doors people are piling up against the glass trying to glimpse the on-goings inside. They’ve heard the gunshot but instead of running off in terror, they’re all tying to peep out a Bruce Willis or Tom Cruise, thinking the latest action blockbuster is being filmed right under their noses.
Across the street sits Participle in the getaway car, and the sun is out. He’s been dangling for the past five minutes wondering how the fuck this is all gonna go down. Jobs with Past have always gone sour, but since Future was in on this one, he’d put some faith into a successful take—the biggest yet. But, hearing the gunshot and seeing the crowd gathering frazzled his nerves.
Why’d they fire a shot ? Thought Participle. Should I get a move on? Or should I stick about?

“AWWWrrhhhh!” Horror. Blood-curdling suffering.
Participle grabs the wheel and fires the engine. The bank door slams open, sending half a dozen gawkers into the brick wall behind it.
Out runs Future. His look is hard. He’s going for gold—no cunt will stop him. He espies Participle and makes for the car. Participle swings open the door. Future will rush the car with the duffle bag over his back. He’ll be half-laughing, half shitting himself. Ten feet and he’ll be in the back seat making love to that duffle bag. All his life he waited for a score like this. Past and Present mean nothing to Future now. He’ll give Participle his cut and keep the rest.
HA! He thinks. Dumb Mother Fu--
*POP!
One single shot. Future lies face-first on the tarmac, gripping the back of his thigh. Participle doesn’t even look back as he hits the gas pedal and there’s a stench in the air. In the middle of the road lies Future with the bag of money by his side.
With one had covering his bloodied face and the other holding the security guard’s .38, Past walked up to Future.
“Fuck Past? Is that what I heard? Don’t you know you can’t forget me? Without me, you’d be nothing. Who brought you in, anyway? Me, you piece of shit. And here you are, thinking you’ll make off with MY score? My fucking score! I put this job together-- Me and Present. We brought you in ‘cause we heard you knew what was coming, could read the moves, predict the new technology, get us in and out in less than three minutes. And here you lie like some fucking convenience store hood. You aint goin’ nowhere no more, Future. I’m here to make sure of that.”
Past firmed his grip on the pistol and cocked the hammer.
“See you in your nightmares, Future.”
The bus travelling at 45 mph struck Past so swiftly that once it was able to finally stop at the end of a three-hundred foot pattern of seared rubber, there was no sign that there even stood a man in front of Future. No blood, no guts--nothing. The bus picked him up, stuck him to the front of the fuselage and barrelled on until it was able to stop with a long hiss, allowing the flattened body of Past to slide down the wide grill.
Future will blink no more than twice. One blink would nearly bring the end his existence. The next, he’ll be looking at a way out. He won’t bother look at the bus and the carnage it took with it. Instead, he’ll raise himself and the bag of money off the street, limp past the crowd of gawkers who can’t believe how real it all looks. He’ll carjack the next stupid asshole who stops at the light, and he’ll drive into unchartered territory as a multi-millionaire fugitive. It's going to be a bright day. Future can tell.