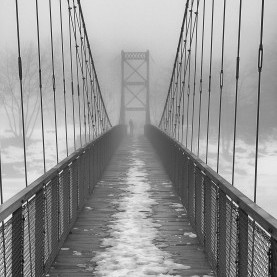 A young girl has left her village under odd circumstances and has accidentally "fallen" into the future- a new world.

How does one become so detached from reality?
I’m trapped within my mind, an observer to the outside world. I am no longer in control- I gave it up years ago.
But to whom, one may ask.
My problems arose when I met him.
Things were normal then, boring, but normal nonetheless.
Sure, he spiced things up, but he fucked with my mind. Disorienting my visions of right and wrong,
Causing me to feel extreme guilt.
Am I to blame?
Or is it him?
I gave up control years ago. The day I met
Him.
I walked up to the cashier and smiled that sweet smile I had been taught, the one that resembled candy apples dipped in a mess of caramel. I was disgusted with myself, I could stop, walk out of that endearing little deli right that instant- yet I chose not to. Like a marionette being dragged across the wooden floor by the puppeteer; I obeyed the silent commands given to me by my unforgiving master. With a voice dripping in honeysuckle doused with lime and exquisite French I began speaking to the poor gentleman in his native tongue in attempt to strike up a conversation to distract both of us from my genuine intentions. “Good day sir”, from the corner of my eye I saw a dark shadow. A hand motioning silently, hurry it up was the hushed demand. I deeply inhaled, relishing the moment where everything was okay- then, I acted. Quickly, I pulled out a knife- it was small, laughable even-but I knew how to handle it. The man’s pleasant expression abruptly turned to one of enraged hatred. His watery blue eyes became a cold, expressionless gray- throwing me off. This was wrong, something was horribly wrong. Where was the confusion? The fear? It seems as though I had met my match, until all went spiraling downhill. Wails were to be heard within miles of every direction. Sirens flashed all around and it was at that moment I knew I had to get away. All the patrons stood up from their scattered and loosely placed positions, closing in slowly around me in a premeditated assemble. The tables had turned, this was no longer my fight to fight. All gathered around me methodically (as if they’d been trained for this very moment). Inhumanly painted expressions crossed their faces. I quickly scanned above the faces hoping to catch a glimpse of him- yet he was gone. I had lost my commander in chief. The job had been completed, yet I was unsure where to proceed from here. My orders were direct. Kill the man behind the counter. It couldn’t possibly have been a case of mistaken identity, after all- the man had been pointed out to me prior to his death. Right then, I thought to myself. What now? Just as the thought crossed my mind, the floor beneath me gave out. Carefully calculated and brilliantly executed a button had been pushed. I felt the walls come tumbling down and suddenly I was in a sphere shaped cubical with mirrors along with techno. equipment surrounding me. Gravity had left yet oxygen still exited, soon that too would be deprived from me. See, in our samfund people do not break the rules. You could say that it is the perfect place to live. We have absolutely no crime. I don’t understand the full history but I do place the time period in which all changed somewhere around the time this country called America still existed. People suspect that it Is a fantasy land- mythical. I don’t know. It has such a beautiful name such a beautiful story behind it as well. We are unable to receive information about the past, it is forbidden, but after much looking I found a women who knew of such things. My grandmama. “it began after the third world war” she started. “The oprørere in Denmark wanted a change. They were tired and wanted their voices to be heard.” The monarchy was to be overthrown and Rosenborg Castle was burned down. The most peaceful country in the nation quickly turned to one of chaos and insanity. The world became power hungry for dictatorship in København until one true leader rose to power”. A sarcastic breathy laugh escaped the elderly woman’s lips.
The rest of the memory is lost to me. A button had be pushed and the woman had fallen. It had been my first taste of reality. At three years old I saw my grandmother, the woman who had taken me in when my own parents had been killed after questioning the government, be tortured than slaughtered right before my eyes. My family was known to make trouble, I guess the time had come for the legacy to be handed to me, although- I certainly didn’t accept it by choice.

Lee. My name is Nikolai Lee.
Nikolai Lee.
Nikolai Lee.
The presence of a blend of colors, and voices loomed over me. A sharp cry escaped my lips. I refuse to give in. I will be strong. It was a tactic they used. Sure, the plan to inflict physical pain was in place- but that would come later. Much later. Very few even reached that stage, many were quickly possessed by the demons placed one by one into every twist and turn of the brain. It will not happen to me. I will not allow it. N.L. My initials, I began to carve them into the walls. Slowly and painfully the task was completed. I briefly closed my eyes, beginning to sink in and out of reality. I owed myself moments of peace.
………………………………………………………..
I abruptly awoke with a start. That dream. I had that dream again. What did it all mean? I had once again envisioned a little girl, maybe around 6 to 7 years of age. She had been walking silently with a beautiful little cape with great elegance. If the details of the dream hadn’t been so vivid one would have mistaken her for royalty. With immeasurable self-conscious the little girl, whose face had never been revealed, peered into a well. Slowly, she sunk into it trying to catch a small glimpse of her face. Unfortunately, she gazed in too deeply and lost her footing. Then fell into the well, but surprisingly, didn’t drown as some would suspect. The water had transported the little girl into a new world. She began a new life. Those in the village don’t know the secret of the well. Despite the fact that no body had been found, many in the village gave up the search and simply accepted the death of the young girl. All but a small prince who had befriended the abandoned servant child. The dream never revealed whether or not the boy acted upon his beliefs. Regardless, it’s all just a dream- probably spindled from a fragment of my imagination, as my grandmother would say. I suppose it resembles me. Regardless, it’s nonsense- I won’t dwindle one it. Best focus on my current situation. I once again scanned the room, no- not scanned. Searched, for anything and everything all at once. I found a little hole in the wall. Just small enough not to go unnoticed. My training seems to have been paying off. I began scratching the surface with my nail. After the paint shed off I realized the hole was much larger than I had first anticipated. I continued to work on my discovery. While the wall was coming loose it would take some patience and time to complete see what was behind it all in my current state. I figure the food I had been fed previously had been drugged. I held it off for about a week and that is when my senses came to me and I was able to piece together a recurring dream. I was beyond weak.