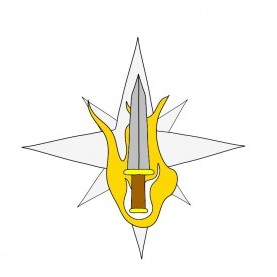 This piece takes place in the sixth realm of Ascentius. It follows the entwined lives of the Elven blacksmith-turned-warrior Telvan, and the human raid chief Devran, as they race to defeat a foe most ancient that wants nothing more than to destroy all life and hope in Ascentius.

In the great realm of Ascentius, across the vast Galak Sea to where no one has set foot since the second age, darkness stirred. Or rather something inside of said darkness. Two evil eyes slowly opened and squinted in the harsh light. It stared across the Galak Sea, using its natural magic to supplement it’s failed eyesight. It’s pupils were whitened from years of total darkness. Slowly it stretched muscles and tendons that had been still for centuries. Its heart had trouble pumping it's still blood throughout its massive body. If one had been looking, he would have noticed that when the beast shook itself, forests miles away toppled and shook. The beast unfurled it great wings, snarling with effort to stretch its tight leathery skin that had been bound for so long. It was used to pain. Its very existence was testament to this fact. As it took flight, it gathered about all of its power and magic, power unfathomed by all, in preparation for the destruction and revenge it looked forward to unleashing.

Talven worked hard. As far as he knew, he was the hardest working elf he knew, or knew of. There were great heroes like Excelsion, or Sarvos Cariu, but they lived millennia ago. There journeys led the kingdom of Alteria to its golden age. Talven smirked at this thought however. If golden age means a war with Sovern,, a resurgence in human raids, and arcane wells being corrupted, than this is the greatest golden age Alteria has ever seen. It was said that the stars in the night sky were actually the souls of great heroes, who had risen to the sky to watch over all of Ascentius. He stopped believing in children stories when he started working in his brother’s forge. In fact, he was almost done crafting his first masterpiece. The first he had ever done by himself. Almost done, he thought. Just a bit more . . . “Ha Ha”, he yelled triumphantly. With speed and precision born from years of practice he removed his work from the forge. “Wait until my brother sees this. He’ll be so proud.” He held the pendant in front of him. It was simple, just a glass star surrounded by golden fire with a steel sword running through the middle. “Our family crest”, his brother had told him. “The sword represents the honor of our family. The fire means our courage. And the star means that when we die, just maybe we can dine with the heroes of old.” He heard the door open and immediately knew it was his brother. He raced to the front room, careful not to damage the pendant. He saw his brother standing there with an odd look on his face, one he hadn’t seen before. “Hey, Sulvar. You’re not going to believe what I just finished making.”, He exclaimed. His brother just stared at him, forlornly. “What’s wrong?”, he inquired. It was then that he noticed the soldiers outside, and the papers in his brother’s hand. Sulvar opened his mouth, but no sound came out. He held out the papers to Talven. He slowly took them and read to himself:

By order of the King, Resident Sulvar Velshen is henceforth given the honor of fighting in His Majesty's royal legion. This letter comes one day before the resident is to report to the regional garrison. Valor to the King, and Godspeed.

Talven looked at his brother, then to the soldiers. The notion finally settling in his mind. His brother had been drafted to fight the largest and deadliest enemy Alteria had ever faced. Talven realized, this may be the last time he ever saw his brother alive again. The pendant shattered across the hard ground, its pieces twinkling in the firelight like so many glittering stars.

Devran raced to the city. It was a reserve city, on the coast of the Galak Sea. He had to get there in time. The city meant safety from the humans. The bright lights meant the soldiers had been rallied to stave of the raid. He ran with his friends beside him. They all looked terrified. If the villagers didn’t get there before the gates shut, they’d be locked out with the humans. And that was worse than death. He could hear the gates locking mechanism starting to activate. He had only seconds before the gate shut and they were trapped outside. Suddenly, an arrow whistled past his head and struck the guard lowering the gate. The gate shuddered and remained motionless. Within a few seconds he was in with the other villagers. He heard screams around him. “Humans!They’re inside! Somebodyhelp!”, all of the sounds muddled into one chaotic sound. Devran stood there among the villagers with the other farmers. He then signaled the other humans with his spear. Metal flashed among villagers. People ran everywhere. It was chaotic. It was loud. This is what he and the other humans lived for. He smiled, as he prepared to charge into the defending soldiers. It was 20 or so humans against 50 fully armed guards. He broadened his smile. He wouldn’t have it any other way.

Devran picked the remaining gold out of the chest. This was one of the largest raids humans had ever done. They had done the unthinkable! Assaulting and raiding an imperial fortress city. They had lost 12 men, but the sheer amount of gold was worth it. They wouldn’t need to do a raid for months if they could get this loot back to the encampment. He looked to his men with pride. “Alright boys, pack it up. We’re getting out of this stinking hole. Load up th-”, an explosion cut him off mid sentence and hurled him backwards into an empty food cart. “What the he-”, another explosion threw both him and the cart even further backwards. He landed in one of the side streets on his back. He opened his eyes and saw something falling down to him. He didn’t have enough time to see what it was because everything had already gone black