Wolves of the Whispering Wood 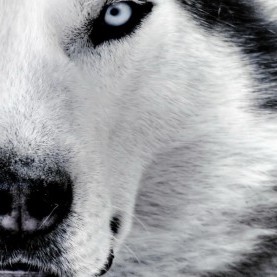 Wolves of the Whispering Wood

My grandmother was a strange woman. Everyone said so. They also said that it was a miracle that such a strange woman gave birth to such a perfectly normal son as my father. He was well respected in our small village of Perry and some of the villagers tried not to gossip about Grandmother for his sake. But Perry is a small place, and people here have precious little else to talk about. I had, on occasion, heard more that the usual gossip about her. While some called her troubled or mad or unstable, others called her a demon, a spellcaster, a witch. I suppose most of these rumors sprang from her many odd habits. I myself saw nothing too unusual about her. A bit quirky perhaps. She liked to go barefoot everywhere and hum old lullabies about the sea. She often mumbled to herself and occasionally broke into a long tale that she would babble to anyone who listened. And she had a seemingly unprovoked hatred of chickens. The knotted cane she carried was often employed to whack at the fluffed and feathered backside of our laying hens. These oddities seemed strange to me, but harmless- unless you were a chicken.

She lived with my family in our small stone cottage and had for as long as I can remember. I often asked my father why people said such things about her. He just shook his head and shrugged his large shoulders. He was a proud man, hardworking and practical. I could see that his mother was embarrassing to him. But he was always kind to her, never snapped when she brought frogs into the house or stuck her tongue out at the neighbors.

While my father tolerated my grandmother, my mother loved her and all of her eccentric habits. She seemed to have unshakable patience for my grandmother that had weathered the trials of having an 80 year old woman as a second child. My mother and grandmother often told each other stories. I would listen, wide eyed, as one of them wove a tale about distant lands and ancient kingdoms where a brave hero fought for their honor. These stories were splendid, but I loved the stories about the sea most. My grandmother told me about the time she had traveled to the sea with her father. Rarely, though, did my grandmother tell stories of her own life.

Her past life was largely a mystery to me. What I did know was just bits and pieces. Some had been told to me by my mother. Other stories I had heard from town. Strange stories. Stories about black magic and wolves. Somehow there was always something about wolves. Some claimed she could speak to them. Others said that she had been raised by them. I always laughed at this story because her real upbringing by wealthy parents was a far cry from gnawing bones and running around in the woods.

But some days I wondered about her. I wondered if there was something in her past that had sparked all these outlandish rumors about her. She did seem to have a strange affection for the wolves that were a plague to the village. On one such day my grandmother and I had visited the stream that bordered a meadow near our cottage. We often went there to fish or, like today, to wade in the clear, cold water. My grandmother’s feet were slick from her permanent lack of shoes and the cold water brought relief to their aches. When we reached the stream, I shucked off my clogs and helped her down the steep bank and into the water. I usually entered the water inch by torturous inch, allowing myself to acclimate, but Grandmother- as always- splashed her way in thigh deep as if it were bathwater. She smiled at my characteristic caution, her lips folding around her toothless gums as she did. Extending her wrinkled hand, she pulled me in. The cold water sent goosebumps racing up my legs and arms. As we waded, our feet slipped and slid over the smooth, gray rocks on the streambed. Grandmother babbled as we went, our hitched skirts clutched in our hands. We found a patch of strawberries on the bank and picked as many as we could carry. After we had walked a far distance down the stream we sat down on the sandy bank, our soaking dresses pulled up past our knees to let the sun warm our legs. The sun hung high in a flawless blue sky above our heads, spreading its warm rays to the green earth below. The strawberries we found earlier were warm from the sun and perfectly ripe. They were so good that we licked the sticky sweetness from our pink stained fingers and searched the bankside for more. We scavenged the bush like two hungry bears until every ripe strawberry within our reach had been devoured.

My grandmother smiled, “Sweet,” she says patting her stomach contentedly.

“Where do these berries come from Grandmother?” I asked, prompting a story that she has told me many times.

“Fairies plant them along the riverside,” she said matter-of-factly. “Fairy berries are the sweetest. Back before your time and mine, fairies grew them in nice square patches like humans do now. But at night giants would come down from the mountains and pick those patches clean. So, those fairies wizened up. They figured that if they spread their plants out the giants wouldn’t be able to find them as easily. So fairies plant them all around, like on this riverbank, but humans still plant in silly square fields. And when they wake up to melons that have been trampled during the night they blame it on deer. What they don’t know is that giants love those vegetables even more than the critters. The fairies know how to keep their strawberries safe.”

I giggled, holding up my pink hands. “Not safe from us.”

“I suppose they should plant broccoli instead,” she said laughing, “then no one would eat it.”

I rose and helped her to her feet and we dusted the dry grass from our skirts. We dipped our hands into the cold water to rinse away the stickiness.

“Thats alright Grandma,” I said, feeling a bit ashamed myself, “We’ll pick her some on the way back.” With that we started the walk back, following the stream to our home. We kept an eye out for more strawberries. I spotted quite a few in a large clump of thick brambles and we started to fill our skirts with them. I crawled under some of the thickest vines to access the bulk of them. As we picked, Grandmother sang a song about a cow who fell in love with a milkmaid. Just as she reached the last verse of the song she stopped abruptly and the strawberries spilled from her skirt. I looked up from my hands and knees to see her eyes staring at the dark tree line.

“Grandma…” I started, but she clamped a wrinkled hand over my mouth. I searched the trees in vain for what has startled her so. Suddenly, I saw movement. Low to the ground, crouching; a wolf. Amber eyes peered out at us from the dark forest and a low growl rumbled from its throat. Black hair on the wolf’s back stood up straight as a terrifying warning. My breath caught in my throat. Somewhere in the back of my mind I remembered my father warning me never to look a wolf in the eyes, but I could not tear myself away from the transfixing eyes of the wolf. I hoped against hope that the wolf would go on its way. My grandmother remained stock still but perfectly calm, hand still over my mouth. Eventually the growls subsided and then, like a ghost, the wolf melted back into the black forest. The space was empty as if the wolf never existed at all. For a full minute afterward my grandmother and I remained motionless, holding our breath with eyes trained on the trees. But the wolf did not reappear. Quickly and without a word we rose and hurriedly crossed back over the stream. Several times, I glanced back to the spot where the wolf had been. My grandmother also looked back, but her eyes betrayed no fear. There seemed to be longing in her eyes. I often thought back to that day; I knew that she had a love for most animals but there was almost a familiarity with the wolf. It was strange to see my silly, absent minded grandmother transform into someone with control and no fear. I had asked her about it later.

“Beautiful,” was all that she had said.

“But Grandmother, wolves are dangerous,” I had protested.

She had smiled and shaken her head as she always did when she thought I was too cautious.