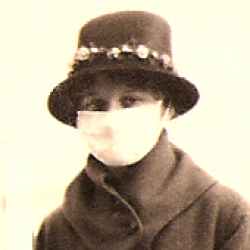 Her fiancé injured and missing in World War I. An influenza epidemic that’s killing millions bearing down on her. Twenty-two year old Lucile leaves home for the first time yearning for an adventure of her own and ends up with the story of a lifetime. Little does Lucile know that the strength and bravery she embodies to survive will be required again later in life to battle an even bigger threat to her life and family. This historical epic is based on a true story.

I stare at the unmarked box on the dining room table like I’ve never seen it before. The layer of dust on top is thick and undisturbed. A damp and musty odor has saturated the cardboard and the dank smell slowly drifts out into the room. It didn’t take me long to find it in the crowded basement of my tiny bungalow. I remembered right where it was. There amidst shelves of empty sea green mason jars, bags of fabric remnants and Simplicity patterns, three broken badminton rackets hanging askew from the rafters, and an old wringer washer in the corner that never got hauled out to the curb—the box has been there all along, just waiting to be brought upstairs and out of its dark cocoon.
The light of morning will soon wake the world around me but I have been up for hours. I’ve wandered this house from top to bottom and side-to-side, circling ever closer to the box with each pass. I’m showered and dressed, an overnight bag sits packed by the front door and I am so full of Constant Comment that it hurts to sit down. My oldest daughter is coming to take me to the hospital. For some reason my doctor thinks it will do an old lady like me some good to have my gall bladder taken out.
“Don’t you worry Lucile,” he told me, without even glancing up from my chart. “It’s a routine procedure.” Still I have to wonder if any surgery is routine when you are 82 years old. I can’t help but face the day with an uneasy feeling inside, but I have never let that stop me before from doing what must be done.
I finally take a seat across from the box. My hands are leaden in my lap, my palms sweating. I cannot seem to take in a breath deep enough to satisfy my lungs. I hear the muffled ticking of the mantel clock on the sideboard even though I don’t have my hearing aids in and I surrender to its heavy cadence. It feels like I’m about to make the final turn on a child’s Jack-In-The-Box toy, well aware of what is about to emerge but still unprepared nonetheless.
Thinking about the relics in the box has been one thing, but actually seeing them again, holding them, demands a different kind of remembering. All those photographs of us together. The diary he carried into battle. A stack of love letters postmarked from France. My own Red Cross armband and gauze mask. The truth is I’ve never known if I was ready to relive those days surrounding my twenty-second year. But with the illusion of more tomorrows fading quickly, I have no choice but to finally lift the lid and recall a time when all my hopes and dreams were still intact. A time before I understood that life could veer off course in unexpected ways and that all any of us can do when that happens is hang on and pray that it won’t stray too far.
And so with equal parts anticipation and uncertainty I open the box to recall the story I’ve never told anyone. Not even my children. The time between then and now slips away in an instant and the memories come quickly once I finally succumb to their pull. I suppose there’s no excuse for my silence all these years except to say that I did the best I could given everything that happened.
I only hope that when you hear my story you will understand.

Riding there in the dark, gently rocking back and forth, I lost track of the order of stops before finally relenting to the exhaustion. I couldn’t have been asleep for more than a few minutes when the conductor slammed open the door at the rear of the car and raised the lights.
“Mackinaaawww City!” His voice was as booming and practiced as any vaudeville announcer’s. “End of the line folks.”
Blinded and squinting, I stole a quick glance at my watch—10:30 pm—nearly sixteen hours had passed since leaving home that morning, nine more remained between me and a proper bed. Unlike any of the previous 77 stops on the Michigan Central line this one was still and deserted. Even the hissing steam engine fell silent for the first time since we’d boarded. The train sat at the northern most tip of the Lower Peninsula, facing the Straits of Mackinac head on. Part Lake Huron, part Lake Michigan, the five-mile stretch of dark churning water left us completely cut off from our final destination. We had literally run out of track.
It never occurred to me that we would have to cross the Straits to get to the Upper Peninsula and make the connection to Munising. I was not normally an absent minded young woman but the week that unfolded just prior to climbing aboard the train left me little time to contemplate the actual trip. It all started with a late night knock on the door of my family’s farmhouse. A full day of threshing left us in the fields until dark and we had just sat down in the parlor, resting for the first time since sunrise.
There was nothing timid or uncertain about the knock. My parents froze in their chairs, moving only their eyes to look at each other and then at me as the same thought raced through our minds. We lived far enough from town that nighttime callers rarely brought good news and my fiancé Howard was overseas fighting on the Western Front. He’d been gone for four months and even tiny Albion had lost several boys to the Germans by then. I jumped up from my chair, dropping the five-foot strand of lace I was tatting for my wedding dress back onto the seat.
“Let me see who that is,” Father said, pushing himself up off the couch with some effort. He smiled gently and clucked his tongue at me two times, like he often did when he noticed me worrying. He opened the door and standing there on our porch was Mr. Riley, Albion’s postmaster. Like a hawk soaring the skies for prey, I instantly spotted a telegram in his right hand.
“Good evening Elmer. I’m sorry to bother you so late,” Mr. Riley said. He nodded at each of my parents but his eyes came to rest on me. “Got a telegram here for Lucile.”
I just stood there, not sure if I should lunge for the door or run from the room. My dilemma must have registered on my face.
“I know I’m not supposed to say anything, but it’s nothing to do with Howard, that’s for sure. From a Mr. Abell, up in Munising, Michigan.” A flush of relief emerged over the tops of my cheeks as the news allowed me to breathe again.
“Thank you Mr. Riley.”
“Abell?” Father repeated, opening the door to accept the flimsy note. He inspected it closely in the porch light’s dim glow, oblivious to the eclipse of moths flitting inside.
“I told the man no one likes to find me on their stoop this late, but he insisted I deliver it right away,” Mr. Riley told us. “You all have a nice evening now.” He disappeared into the darkness hugging the bottom of the stairs.
“Thanks Tom,” Father replied, still studying the envelope. He let the screen door go and without even looking caught it just before it slammed shut, guiding it to a gentle close instead. “Do you know what this is about Lucy?” he said, finally passing it to me.
“I think so.”
Mother came and stood right next to me. “Who’s Mr. Abell?” She could barely keep herself from grabbing the telegram.
“It’s about a job,” I said as casually as I could but the words got caught on my tongue. She was unhappy that I hadn’t accepted a teaching position at the local elementary school. I opened the envelope with a whisk of my finger.
“Miss Ball. Need qualified replacements for high school teachers drafted. Albion College President recommends you highly. $120 per month. Start next week.”
“Next week!” Mother gasped.
“Desperate for help. Wire answer tomorrow. With sincere gratitude. Mr. Harold Abell, Superintendent of Schools. Munising, Michigan.”
“It’s out of the question,” Mother said. She dropped into the creaky, straight-backed, Victorian chair where she did her knitting each night. “A young woman has no business traveling so far from home.” She gathered up the sweater she was making for my brother Elton and began to count stitches on one of the needles, as if an entire conversation had occurred and no longer required her attention.
“It is good money,” Father said. Smiling. Proud. The salary was double what any teacher in our area made.
“What does she need that for?” Mother replied, without looking up or losing count.