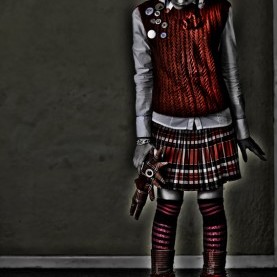 Sometimes, the best-dressed and well-behaved lunch date can be a vampire. Rachel knew this as she was assigned to get rid of this vampire.

The vampire crouched behind me, its fangs all sharp and pointy, and its eyes a vicious red color with skin pale as though it had been dead for a very long time. I supposed it had been dead long since vampires were technically dead and all of that. Even though ‘it’ looked at me as if I were its next meal, which I probably were, I just wanted to reach into my purse, pull out my makeup kit, and give it a makeover.

What was fun in battling something that looked like it had just crawled through the dump? And the worst thing of all, it hadn’t even bothered to get rid of that icky and gooey slime. The slime covered its velvety purplish shirt and tight black jeans. Yuck! Plus, the vampire knew how to dress.

Just moments ago, we were having lunch, discussing our likes and dislikes. Basically, just two people trying to get to know each. I was set up on a blind date by Castiel and the guys, and no, they weren’t my friends in the sense setting me up to meet a new guy. In reality, I had a boyfriend: sweet, adorable, caring Arch. Arch, my sweetie, was very special and very nice, and better than this charming and disgusting vampire.

Well, to better explain things, Castiel, Arch, along with the guys and me, were part of a team. We were called the ‘Sparkling Destroyer.’ No, we weren’t called that, because Gemma would flip out. She was the one who usually handled vampires and all the icky and gooey things that went bump in the night, but Castiel, sweet old Cas, wanted to see how I would do if I were in a situation like this. To say I passed would be an understatement, as the vampire had tackled me down, pinning my arms above my head, its fangs brushing just below my neck, searching for my sweet spot.

Back to what ‘Sparkling Destroyer’ did, we, to sum it up, caught monsters and vampires that were deemed not ‘redemption-worthy’ and threw them to the fairies. As if. We killed them, sweet and short, like eating a cake, and save the world from a bloodbath. Not that we got noticed anyway. I don’t think I need that kind of attention like ever.

“Oh, dove, hear that lovely tune? Go on now, listen to it!” it urged me as the room grew dimmer and dimmer. “That’s your blood, dove. Sweet and pure. Haven’t dined on one of those for ages.”

I rolled my eyes at it. “That is, uh, very sweet. I really don’t think I want anyone feasting on my blood. It like belongs to me, and I would like it to remain that way,” I replied innocently, batting my eyelashes, trying to make its outline in the dimmed room, so that I could kick it in that oh-so-special area. Just because it was dead did’t meant that it was unfeeling.

I hoped that was true, or else I will be screwed. Oh, so screwed, that it will make flowers wither away.

“Is that so? Well, dove, I promise I’ll be gentle. A man has to be gentle on a skin as silky as yours. So smooth and toneless.”

It tucked a strand of silver-misty longish hair behind its ear. Ears as big as an elf if I may add; not that I had anything against elves. They were always nice to me when I screwed up.

The vampire slithered a finger across my cheeks; it felt as cold as ice, and soft like my cushiony pillows. “Ah, I could live with this, soft, so soft skin. Dove, we should become one. You and I could do so much. Paint the birds red. Make the humans our red torching roses.” It laughed, a cold and mellow tone.

I chuckled, both amused and scared. “Yeah, I don’t think so. That’s really creep, and pathetic.” Gradually, I tried to free my hands from its grip, slithering my fingers like snakes, down and up, and up and down. “It’s really sad that you get pleasure from killing birds, the innocent birds who, if I point out, did nothing to upset you. How could you?! And watching people burn…are you a vampire or a psychopath?”

The vampire crinkled its eyebrows, as if, seriously thinking it over. Then, it let out a long hiss, and murmured, “Yes, dove, you might be onto my little secret there. I’ve a passion for killing everything that appeared innocent and pure. You, though, are the exception.”

It pointed to me with long pale fingers.

I bit my lips. “Why? Is it because I’m blonde? Because that’s really stupid.” Pout, pout, pout. “I won’t do whatever you’ve planned for me if you were a normal guy. Yeah, you’re way too stupid and crazy. Don’t want that to be anywhere near me. Thanks for the offer though.” I smiled at it, flashing my pearly white teeth (they were probably stained with the coffee stain, or the juice stain).

My statement had, most likely, hit a nerve, because it screeched and screeched like, well, a zombie, in those scary movies. I shivered at the thought; I hated scary movies. It loosened its grip on me; it was the perfect moment to attack it. I pulled my hands out from its grip, slowly and carefully, I wouldn’t want him to slice me up or stuff. Rubbing my aching hands, I closed my eyes, and decided it was time to strike. I swung my legs upwards, and hit it. Really hit it. Over and over again. I smiled; that was easy, a little too easy. I didn’t cared. I won and that was all that mattered.

Or so I thought.

I heard clapping behind me. “Perfect! That was just absolutely stunning, dove. I knew you were going to do something stupid like that. See, dove, I know you. Your every moves. You shouldn’t have done that,” it said, its tall and lean frame pressing into my small and tiny one. “Tell Castiel I gave my warmest welcome. And give my love to that feisty hunter. She’s a lovely one. Oh, and tell your boyfriend that he’s always welcome to join us back. Your boyfriend may be an angel, but he sure make a better vampire.”

How dare it say that about my sweetie? Arch used to be really bad, and did pretty horrific things, because of his love for a vampire. Lydia. The mother of all vampires. Actually, that wasn’t true, the part on Arch doing everything for Lydia. Arch just always had that dark side hidden deep inside of him, and when he got a taste of it, he loved it. Now, he had learned his lesson. After being cursed for nearly three century in the most cruel way, I think anyone would learn how to be good again. He couldn’t hurt anyone, and when he did, he experienced the pain he inflicted, and his opponent’s inner feelings. It was really horrible.

I shoved the vampire away with a rough push. “You shouldn’t say that about my friends. You have way worst friends.” It really did. “Your friend, um, what’s her name?” I clicked my fingers. “Eloisa? Yeah, that’s her. She told us all about you. She, practically, gave you away. She told us where you were, and all of that good stuff.”

“I never liked that fox. She’s very untrustworthy, dove.” The vampire moved its hands along my exposed back, sending shivers down my spine, and not in the good way. Damn me for wearing a hot red open-back dress. “After you and your friends left, she warned me about what might happen. You didn’t think I was just going to be here unprepared, so that you could stake me?” it asked me, eyes twinkling, lightening the dimmed room.

Crap, I hadn’t thought about that!

“Actually, I knew all about Eloisa. I heard from your vampires’ buddies how she loves you. She’s in so deep that she would do anything for you,” I said, wrapping my legs around its. I had no idea if Eloisa were in love with it, but I was taking the risk here. A big risk. God, I hoped I was right. “Anything.”

It stopped for a second, then its eyes became a deadlier color of red, its fang all fang-y like, and was ready to strike. I closed my eyes, and wished that I knew what I was doing as I tried to lift its weight with my legs. I felt it stumbling as my legs felt lighter.

Good, I thought, now, it’s time for sparkly and glittery to work their magic. I took out the stakes that were tucked away in my updo, and was ready to plunge them deep inside its heart.

Then — nothing — dust. I saw Gemma and the guys, and it all made sense to me.