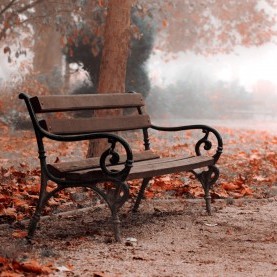 A girl with schizophrenia, pudding, a spork, and a need for a spoon.

Everyone is curious about crazy people. It’s human nature, I suppose. One is usually curious if a person starts screaming mid-sentence or stares off in the distance at someone who isn’t there.

In a moment of irony, it seems whatever up above force made even the crazy people curious about crazy people. Then again, all kinds of crazy are different. Not everyone is screaming the same phrase repeatedly, nor do they scream for the same reason should they have one. Not everyone is speaking to the same nonexistent entity. The rooms they stick us in are never different though. They use the same off white that’s meant to keep us calm, the same straight jackets to keep the confused from hurting themselves and the violent from hurting others.

I have quite a few voices clogging up my head, my brain filled with rooms in a hotel where the guests never check out, but I’m rather certain that this voice of thought is one I’ve produced on my own.

I barely know who I am. Remembering isn’t something that comes easy to me. It’s similar to opening a book and trying to find page 86 and yet somehow I end up in the kitchen with a potato and no clue as to how I got there or where said potato came from. But by that time I’ve already forgotten about page 86 and now I’ve gotten caught on something else.

Catch that chair on fire, will you?

I remind Thirteen to keep quiet. He’s a nasty voice. One of the ones that makes my skin crawl with his horrifying requests. For the most part I can tune the voices out. Only about three are ever really occurring constantly, and I’ve named them as if they were puppies.

“It’d be hard to catch that chair on fire,” I say aloud, just to get him to stop complaining. “All I’ve got is pudding and a spork.”

Maybe if it were a real spoon. I close my mouth, thinking about how the people in the white coats might start with the funny looks again should I speak too loudly to someone who isn’t there. No need to worry them.

“No need for the little room and the-” I curse silently, letting out a puff of air. I’ve got Miss Cross’s attention. She’s a nice little lady, tiny and delicate. I try not to think of all the terrible things that Thirteen has come up with to do to her.

Oh is that my name?

“Who are you talking to sweetie?” She asks kindly.

“Thirteen. And Roo.” I tell her honestly. Roo is a bit of a troublemaker too. But surprisingly, the third of my most common voices has yet to make an appearance.

“Don’t listen to them,” She reminds me gently. Miss Cross must be worried I’ll try to set the chair on fire. Pffft. As if a spork would work. A real spoon, like I said. Then we’d be talking.

Oh sweetie, Maria mocks. It’s like she read my mind and came from hiding. Well, she’s part of my mind, so she probably did read it. I’d wear a foil hat, but I don’t think it’d help much with something that’s already snuck its way into my head. Did I leave that potato in the kitchen? Oh well.

“Ash,” Miss Cross snaps her fingers a little and my attention is pulled back to her. “Just remember your therapy, okay?” She smiles gently. “The voices aren’t going to hurt you if you don’t do what they say.”

I’d tell her that they’ve never threatened me. The voices, for the most part, have never been much more than company. A bit of a house party going on inside my skull. Drinks and party favors for all. But I’m not that unstable, not really. Not compared to some of the others in the left wing of the ward. Then again, I’m still not entirely sure if Miss Cross is a figment of my imagination.

Sarah is a severe schizophrenic- I’ve been told I’m a rather mild case, and though Roo, Thirteen, and Maria always shout at me for thinking it, I’m glad. Sarah is a screamer. She’s also a wide eyed girl with matted blonde hair that explores the ward every night until someone drags her back to her bed. I’ve been in the ward two years, and I don’t think she’s ever slept a wink. Maybe she’s a robot. She screams every morning at exactly 6:23 sharp without fail. She must have been an experiment; an alarm clock gone wrong that was sent to wake up the crazy house in the morning. I wonder if anyone ever got around to rewiring her, because I’d assume that’s what is wrong with her hard drive.

Did you catch that chair on fire?

I glance over at the chair. It looks like it’s on fire, but I have to be hallucinating because no one else in the game room has noticed. Maybe no one really cares, anyway.

“No,” I mutter to Thirteen. A Cheshire grin is floating just above the flames, and it must be Thirteen. That’s the only way he’s ever shown himself to me. “But you did.”

I had been meaning to lecture Thirteen about his need to set thing ablaze, but it’s night now, and half the day has slipped from my memory.

Someone has ushered me to my bed, and they’re talking to me, but it’s not computing correctly. Whoever it is that’s screaming needs to stop. Why won’t the aids make them stop screaming? The lady helping me has run off, and I’m glad. Her perfume smells like smoke.

The cheshire grin floats just above the foot of my bed and I blink rapidly.

Catch that chair on fire yet? Thirteen asks.

I had forgotten I had a spoon in my hand.