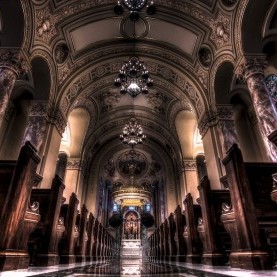 Mamrie has awoken inside a vast forest with no memory of her life before this moment, but she's under attack. As a form of sadistic entertainment she is forced to fight with no weapons against an all powerful beast.

The tall trees loomed over me as I sprinted through the dark forest, crows occasionally swooping. It appeared as though everything was trying to harm me.

I would been trapped in this place for what seemed to be months, losing count of the amount of times that I've seen the sun rise. Why me? Why did they take me? I was still unsure who 'they' were, all I knew is that it was their fault I was hiding, their fault I was trapped in an open space.

I tried running, my legs moving so quickly I thought they would disappear from beneath me, but somehow this landscape was on loop. I could run forwards forever, but I would only ever return to the start.

My purpose in this universe was still unknown, I still hadn't been informed whether I was here for my death. It was then I saw it.

Its horrendous screech pierced the air and an evil snare emerged from the bushes. That beast, it was not of this world. Its charcoal black eyes stared me down as if eying up it's prey and the glint in its eye seemed reveal the enjoyment it would receive, but only if I allowed it to capture me. Swiping at me with its large scorpion-like tail the creature growled once more. My blood ran cold, what could I do? Aiming to aid my fight I grabbed the nearest stick on the harsh thorny floor.

"Hello? Mamrie, is that you?" Came an unrecognisable voice from above, yet they knew my name. "Well, well, you seem to have woken up in time for the entertainment which is of course you." She sneered. I wanted to ask questions, but at this point all I could do was listen. "We're going to play a little game with you Mamrie, we're so bored up here" Her sarcastic tone angered me and the curiosity and fear within me demanded that I found out who this voice was coming from.

"Who are you?" I squeaked. I hoped for a more dramatic and fearless sounding line, but that was unobtainable in my current situation.

The creature seemed to have frozen respecting the voice. A chill was delivered down my spine, if this creature was afraid of whomever I was speaking to, then there was no doubt that my life could be at risk. "If you survive the Gaiztoak, then I will free you from the grips of this reality. If not, well, I'll leave you to guess what happens next, oh, and our identities? They are to remain anonymous"

I ran my pale slender fingers through my long blonde hair as I always did when thinking. I loosened my grip on the twig I had been clutching and neared the closest tree, it would be easy enough to climb. Wasting no time, I hoisted myself up onto the branch above my head, then the next, until a fear of heights I had never acknowledged before overtook me. I sat gazing at the forest which still looked to be frozen in time. Everything looked so peaceful if only that was true.

I was awoken from my trance with a thudding near the ground, the Gaiztoak had resumed its mission to kill me. The atmosphere was daunting, the sort which clenches your gut, demanding to be felt, unwilling to let go. I must survive.

I would been too focused on the present to reflect on the past, but when the idea of having a life before waking in this forest came to mind, I could recall no memories. I must have had a family, maybe I went to school, but I didn't know any of that now.

First I had to kill the evil beast placed somewhere within my immediate surroundings. I could smell the rotting flesh from his breath up here, the sort of creature who showed no mercy would not be scared by a stick, but that was my only weapon, the only thing that I could fight with.

Rapidly, I tore a thin branch from the tree I was perched in and began to scrape it against the bark of the trunk in hope that I could create a pointed end to fight the Gaiztoak with. It was now or never, I may not be prepared but I had no knowledge of how long my body could function with the lack of food in the surrounding area.

I climbed slowly from the tree, hoping that I would have the time to steady myself on the ground before being launched into a battle. I had no luck. Before my feet could touch the earth the Gaiztoak reached for the cuffs on my leggings and gripped them with its strong bloody teeth which would clearly be capable of picking my bones clean.

Panicked, I heaved the stick into the eye of the creature. It let out a deafening yelp but I hadn’t defeated it yet. I thrust the stick towards it once more but it was too late. The Gaiztoak pounded towards me and knocked me on my feet. I could feel its razor-like claws scratching at my flesh where the clothing had torn. "Fresh blood" It whispered. This is the end I thought, I've been defeated.