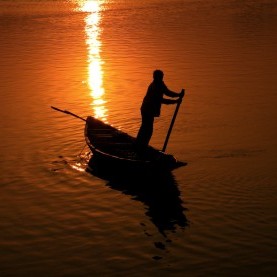 The first chapter of a story about a trans girl called Charlie. She thinks she'll be alone forever, but then she meets Eleanor who has a rather unusual secret. Together they fight to abolish the evil of the world.

I've known for a long time that I didn't fit in. I wasn't meant to be Charlie, the ordinary boy from London. This life had never suited me and I didn't know why. One thing I did know however, was that demons, angels, monsters and ghosts all existed, and I was the only one who could stop them.

The wind swept my shoulder length auburn hair from my sun-kissed forehead and though the weather was warm there was a certain chill to it. The sort of atmosphere which clenched your gut, demanding to be felt, unwilling to let go. My blue lace dress was flapping at bony knees. If there was one word to describe my feelings it'd be comfortable. The material was clinging to my masculine figure, and of course I felt self-conscious, but it felt natural and I enjoyed it. This was the first time I'd felt content in a long time. A burly man whom I can only assume is a professor here, taps me on the shoulder. "What's your name son?" He asks. I couldn't help but wince at the word son; it was always male pronouns. I may have been born with the body of a male but inside I knew I was a girl, I just had to persuade everyone else that. I rubbed my eyes, and as a result wiped my mascara down my cheek. "Makeup too, boy?" The professor spat in disgust. "Follow me, I'll find you some proper clothes." In an attempt to avoid further humiliation I obeyed, my head hanging low to avoid recognition from any pupils. We turned a corner and headed towards the lost property bin. No, he can't make me wear any of these can he? Thrusting a full outfit of stereotypically manly clothing at me, he requested that I immediately wash the makeup from my face. The stench of used, abandoned and unwashed clothes filled my nostrils and my cheeks grew warm once again. This wouldn't go un-noticed. His final words rang in my ears "you're a clever boy, so dress like it" he'd said. It might have been meant as encouragement but I doubted it. All it'd done was strip me of pride. However it had also woken something up inside of me. Motivation, perseverance, I was going to go out there and be the best girl I could be. I arrived late at my lecture and took a seat near the front. The cold white walls seemed to close in, making me too aware of the turned up noses around me. I knew I couldn't run from the life I was living, so I'd learn to enjoy myself. When my best friend had disappeared on me, I thought I'd never learn to laugh again but now I realize I don't need other people, I can be myself by myself. Though I often contemplated where Mia had gone her loss didn't effect me as much these days.

"Charlie" the professor snapped, waking me from my daydream. "Erm... I'd like to be called Lilly please" I said with my new found confidence, then added "if that's ok" quietly, suddenly regretting opening up. "Don't be stupid Charlie, that's a name for a girl, something you aren't". Her words hit me hard, making breathing difficult. "I am" I managed to whisper before my humiliation engulfed me entirely. I placed my burning scarlet cheeks into my hands. By now my pride had completely vanished. The rest of the lesson zoomed over my head. I was too ashamed for admitting who I really am, to concentrate. I hadn't even taken a step into the corridor before a large student with no hair grabbed me by the throat. Before I could fathom an escape route I was surrounded, resistance would be foolish. A hit to the stomach then the face seemed to be the pattern they were following. I wasn't sure why I was being beaten, it could be the clothes I was wearing or the idiot I'd made of myself in class, but in my own opinion it should have been because once again, I didn't stick up for myself. Pain seeped through every inch of my body and I shivered in fear. The only warmth I felt came from the blood trickling from my nose. I felt as though I was being ripped away from who I really am, my soul left in shards on the floor. Then I went numb. The feeling retreated from my aching limbs.

I had to stay awake. Losing consciousness would only result in my mum having to pick me up, and then I'd have to admit how I felt, confess that I'd been wearing her dresses. It was too late. Stomping in fury she burst through the school entrance. The bullies fled and, taking no notice of my injuries, my mother grabbed wrist and dragged me from the building, without once opening her mouth.