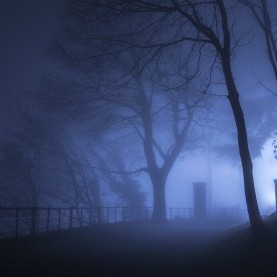 Absolutism fuels fanaticism and conflicts all over the globe. From religious to political and scientific treatise, lines are drawn in the sand. John had born witness to much of the destructive force of absolutism as a photo journalist covering war throughout the middle east. But little if anything has absolute meaning when you become befuddled by the spectre of early onset dementia - the fog of war in which John now finds himself.

~~He knew he had seen them somewhere before - his son and daughter - he just couldn’t quite place it. The vestige of recognition reflected in the slight sharpening of his focus. His eyes demonstrating outwardly the tumultuous machinations occurring within his mind. For a moment he would think he had grasped it, the letters coalescing in front of his minds’ eye to momentarily form a name to put to the face, then suddenly and cruelly dissolving before him faster than he had time to positively identify the name that had appeared. He let out a sharp grunt in frustration, causing April to instinctively reach out to touch him on the arm. He withdrew it as soon as the sensorium of touch registered in what was an unconscious act of shame on his behalf.

The nurse, sensing his growing frustration, intervened with a knowing glance directed at both April and Marcus in the vain hope that their diminutive age would not impede their understanding of the universal message she hoped to convey through body language alone. Unfortunately, it was not to be as she was met by two sets of eyes that cried confusion and bewilderment. At that moment John staggered back as if unbalanced by the unfathomed emotional whirlpool that circled around him. Josie, the ever present nurse that she had proven to be, grabbed his arm forcibly before he lost his kilter altogether and fell yet again adding to his innumerable injuries.
‘There, there John, mind you don’t lose your step’ encouraged Josie ‘The kids and I don’t want to have to heave you of the floor again’ she chided, while winking at the kids.
They responded with warm smirks, while John simply stared blankly back at Josie as if still coming to terms with the shock of almost falling.

However, just as shade quickly envelopes the landscape as the sun rapidly disappears behind a cloud, John’s mood suddenly grew sullen, registered first by a glowing ember in his eyes. Josie, who registered this change as if by a sixth sense developed from working around dementia patients for over a decade now, went to console John, once again with a knowing touch. This time a gentle grasp of his hand. She, not unexpectedly for her, was met with a rapid withdrawal of that hand and then, rather more unexpectedly a full blown slap across her face with his other hand.

The impact rang true, like a whip lash, and the red hand mark on Josie’s left cheek was almost instantaneous. Marcus and April looked on in astonishment with a growing awareness that they did not know this man who they called dad. It seemed incongruous yet natural that their sympathies now lay with Josie, while their father seemed to almost have the aura of a monster. So much for a 7 and 10 year old to process thought Josie as she rubbed her cheek and stepped back to take April, who was clearly distressed at this time, under her arm. A hint of shame washed through John as he watched and sought to understand the scene before him and the events that had just unfolded. The form of April weeping in Josie’s arms seemed to resonate in John’s subconscious and he felt he could almost grasp who and what she was. And how she might have come to be in his presence. But the scattered pieces of jigsaw puzzle in his mind was unconvincing. There was a link to be sure, he just couldn’t quite place what it was.

Marcus, being the older of the two, had seen it all many times before, and although it still disturbed him greatly – his father was certainly not like any of his mates fathers at school – he had learnt to subdue his emotions around such events. He had only just reached double figures yet he already had an adults’ cynicism in regards to the futility of caring and feeling too much. He knew his father hadn’t always been like this, and he knew enough about his past to still have a vestige of pride in him. To the best of his recollection, he had just never seen anything of his ‘real’ father – ever!

At that stilted moment Annette entered the corridor where the others stood perplexed, having exited from the common room filled with recliners and an impossibly large flat screen TV dominating one entire wall and the consciousness of all who sat in front of it. Her gaze shot from the children to Josie to John and back again. Realising that a less than positive moment had just transpired she sought to short circuit the charge in the atmosphere. In a manner that was both abrupt and efficient she announced, ‘It looks like we will be on our way then’, her eyes fixed on John but her comment addressed at the others, adding ‘seems as though we have chosen another bad moment to drop in!’

Josie shot a gaze right back at Annette as if to say ‘all the moments are like this from now on’ adding in her own internal dialogue ‘ you silly bitch!’ . However no sooner had she thought it than she remonstrated with herself that this was not being very understanding of Annette’s position and the journey she had been on to reach this point. In that passing moment, Annette had gathered up Marcus and April, one in each hand, and instructed them to say goodbye to their father. The children still chastened from what had just transpired, muttered a subdued ‘bye da.a.ad’, while Annette stepped towards a still catatonic John and kissed him on the forehead, whispering under her breathe, ‘may you find peace soon’. The whole while John had not altered his gaze from his outstretched right hand, still ringing from the blow he had delivered to the side of Josie’s face.

With that, Annette turned on her heel and strode off assertively back down the corridor with its carpet stinking of stale piss, past the common room, TV blaring, and towards the exit of the ‘Kingdom Hall Retirement Village’ with kids in tow. Inwardly, she wanted to collapse in a heap before she took another stride, externally she knew she must remain unshakeable for the children’s sake, a bulwark of support in order to give them some notion that life was not just an empty exercise in sufferance and pain, knowing full well that for her at least it was just that.

She wanted to feel again – something. Something other than a seething resentment that she had been singled out, actually no – truth be told – that they both had been singled out to endure - an unthinkable hardship in just there fourth decade of life. Who could ever have countenanced just five years ago that her former husband and father of who two beloved children would be rotting away in a convalescence home for the elderly. Day by day fading away like a waning moon, for whom the flickering light of recognition had all but been extinguished at just 36 years of age.

This is not at all how she had imagined her life to be in her mid-thirties. Granted, she had suffered their separation and subsequent divorce believing that that was as ignominious as life could possibly be to one who was meant to be in her prime. How wrong she was! The separation and all the tumult it brought with it was just the beginning of a seemingly endless cascade to the depths of despair. She had countered at first by giving as good as she got, by pushing back with ruthless and unbridled anger. She was not going to be pushed around and walked over by him. He had hurt her immensely and although there was a growing acceptance there was nothing more she could do to change that, she was as sure as hell going to let him know it.

She knew that she herself was not blameless, she had been missing when he had needed her most just as he had done to her but despite the recriminations she just wanted to know tenderness once more. She wanted to be able to let go, to melt like an ice cube on a warm day, and not have a care where she cascaded, formless and free. Released from the tight cold structural shackles of ice, its constraint and conformity. A brave face masking a shattered heart is how she saw her task. And how she longed for certainty and security for her children, the only meaningful sense of purpose left in her life, well before she was even half way through it.