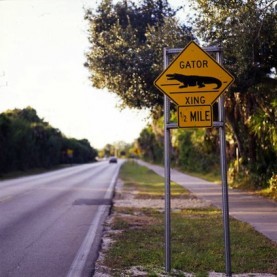 Ginny is sixteen and feeling less-than when she encounters an alligator and a fish-truck driver one steamy morning in North Florida on an empty tank of gas.

I thought you did an amazing job of pulling me into the story and keeping me engaged. I can't imagine anyone reading this and not experiencing that. Your descriptions were vivid to the point I could imagine myself in the characters shoes, sitting there waiting for traffic to move and feeling the heat of the day. The dialogue was well thought out and your main character was amazingly well developed. She had clear direction from start to end.

So, I think your story (despite first-person's narrative) is full of some lights and smells. The story is really combined two different things, the humans funny world and the melancholy world and in my opinion this is an unique stile of writing.
Tweets by @thepenfactor