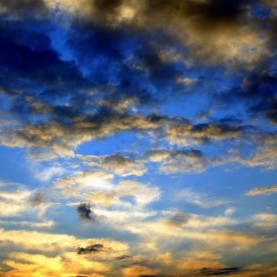 Walking with my mother in the hot summers of Missouri brought out her own memories and philosophies from her life in Arkansas.

Mama always said there was something about the heat that just made people open up. You couldn’t really notice inside, with an air-conditioned, insulated house keeping your body cool and your mouth tucked tightly away with your own thoughts. But it was on the hot, hot summer day, when the sun couldn’t seem to get any closer, and the spring winds had finally blown away, that Mama’s words finally made sense.
Mama and I would go for walks when no one else dared venture out into the molten, bright air – just me and Mama, our bare feet burning on the dusty roads and our hair bleaching beneath the sunlight – that was when we’d go for walks. The heat had a way of seeping through your skin until you sweat from your bones; the humidity was so thick you could see a haze of it, mingling with the gnats. It made the back of your neck felt like the sun had a whip and was punishing you for walking in its domain. I used to hate the heat; it always made me feel claustrophobic, because no matter where you stood, which way you turned, or even if you tried to find shade, it was always there: pressing and oozing against me, smothering my breath. Our long walks always reminded me how much I loved icy, blistering winter – but Mama, I think, could enjoy that heavy heat more than the sun.
It was in those hottest days of summer than Mama’s words would come true. We’d be on one of our lonely barefoot walks when she’d become the victim of her own wisdom. Maybe the words were melted out of us, like the way cakes always sagged in the heat; I don’t know – but she’d start telling me things she remembered from her grandfather’s farm in Arkansas. He own hundreds of acres in the wide open land. “Don’t ever retire, Papa Charlie always said,” she’d tell me as we walked past the fields of hay that reminded her of home. “The days get long,” and she would deepen her voice to mimic him. “We never understood,” she would confess, speaking of herself and her three siblings. “We loved his farm; you could go exploring all day in the hills, and fishing in the pond, and you could help him in his garden, and he’d always give us a big silver dollar when we were done helping.” She would shake her head, her coarse brown hair gleaming in the heat. “I don’t know where I put those silver dollars,” she’d say sadly. “I guess he was right, though - his garden was always perfect. Not a blade of grass in it; he had nothing else to do. Don’t retire, Papa Charlie would say; the days get long.” And that would be the end of her stories about Papa Charlie, my great-grandfather, although she wasn’t quite done talking yet. She could tell me everything about growing up, playing softball in the smothering heat in the Arkansas River Valley, and the bloody, messy work of fishing for catfish. “Flies were crawling all over you, because of the bloody meat we’d fish with, and you were covered in sweat and blood,” she would say. She could go on for hours, and I could fill a fat book with all of the things she said, but I think the things that stuck with me the most were the stories about Papa Charlie. I never met him, but I think I could recognize him on sight.
It wasn’t just Mama who would open up in the heat, like a morning glory in the dawn – it was my Grandpa Strassle, too. We visited Grandma and Grandpa Strassle the most when I was growing up. Just like Papa Charlie, Grandpa Strassle had an immaculate garden, too – but when he became almost completely blind, and there no more hot peppers and okra and tomatoes; just plums and peaches that Grandma would peel all day for jams and pies. Grandpa and I would go sit on the front porch and soak in the heat. His cigarette smoke never bothered me. He would miss every time he tried to throw a butt in the ashtray, but I suppose he did all right for a blind man. He could go through an entire pack while we sat outside, just the pair of us in the thick heat of the Arkansas River Valley. His stories were much more lively than Mama’s – he grew up on a farm with several siblings, the son of German immigrants who had come through Louisiana and followed the Mississippi River North. Grandpa never went to college, but he studied hard and played hard. He almost became a baseball player for the Arkansas team, but broke his thumb at the last moment. When he joined the marines – and later, the air force – I wonder if he knew he would be entertaining his granddaughter one day with the endless stories. Most of them made me laugh; my grandfather had knack for wit and he was usually in the thick of mischief. Some stories made me quiet, though, as we sat in the heat, watching our skin melt, and made me wonder if I could ever be as brave as he was.
I suppose Mama was always right. Up until the day Grandpa died, we always sat on the porch and talked for endless hours in that sweltering sunlight, and I expect that Mama and I will keep going on our endless, lonely walks, too, until one of us can’t walk anymore. There’s nothing quite like the endless summer days that make you remember your roots – where you came from, who you’ve seen, and what you’re made of. Sometimes, it just takes a little sunlight to remember things like that.