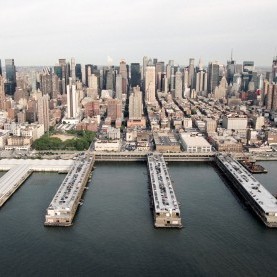 I wanted him to imagine me there, walking down skyscraper-lined streets, buying hot dogs and dodging taxis.

My Grandpa grew up in Brooklyn, New York. He spent the first quarter of his life there and the majority of the last three quarters in Baton Rouge, Louisiana with his lovely Southern bride. But if you spent any time around him in his adult life, you'd think he was a recent transplant, like someone had dragged him, kicking and screaming out of his borough and just left him to melt in the Louisiana heat. He never stopped reminiscing about the rose-hued days of his childhood in New York City.

When I was a kid, Grandpa was my best friend. I grew up down the road from him, just a bike ride away. My grandmother passed away before I knew her, and that event seemed to preserve the past in amber -- Grandpa's house was a fantasy world with all sorts of cool relics from a family life that stretched back decades. In his world, things were memories of good times with people, so he never threw anything out. Black and white photos from the 50s. Toys and half-finished coloring books from the 60s. A record player and goofy novelty records from the 70s. Old novels and cassette tapes from the 80s. The kitchen cupboard door was covered in pictures of family friends. Pictures of fun-looking, strangely-dressed people I'd never met. But the best thing about Grandpa's house: Mom and Dad's rules didn't apply. And there was cable TV. Grandpa was fun.

Grandpa had stories, of which I sometimes grew tired. But through his stories, he created for me a mythology of New York City. His daughters both lived in Manhattan in the late 80s and 90s while I was growing up, so he thought of it often. He showed me pictures of massive skyscrapers and the Brooklyn Bridge. He would tell me about running around the streets, playing stick-ball with neighborhood kids, about selling souvenirs at Ebbet's Field, home of the Brooklyn Dodgers, about the boardwalk and the beach at Coney Island. And of course when I visited my Aunt Joan and Aunt Heather in the late 90s, I fell in love with the place. It just seemed like everything was there and everything was happening there.

So naturally, I moved there. It's been about a year now. I live in Brooklyn, just a bike ride away from where Grandpa grew up. I live in a place that felt like home before I even arrived. When I left Baton Rouge, I tried to tell him where I was going. I don't know that he understood what I was saying, but talking about Brooklyn made him happy. Talking about Joan and the grandkids made him happy. New York is very different now to when little "Blondie" Jimmy was scampering around the sidewalks. I wanted to tell him about it. I wanted him to imagine me there, walking down skyscraper-lined streets, buying hot dogs and dodging taxis. I wanted him to ask me a million questions and to hear more of his stories. But I knew it would never happen. I moved to New York too late.

Grandpa fought with Alzheimer's with a remarkable dignity. But I guess what made it remarkable was that he never fought, really. It took us all by surprise -- Grandpa was nothing if not a fighter! He was an arguer, and he had a temper. You could never win with him.

But, to our surprise, the ego and the temper died down once the Alzheimer's set in. He adapted. He loved people, and he loved making jokes. So if you laughed at his jokes and could joke back, he would be compliant. Once the senselessness started taking over, the jokes, bad as they had been, were replaced with only the rough outline of jokes:

"Come this way, Grandpa. Let's go sit in your room."

"Okay, but you better not try anything funny, or I'll sock ya! Ya hear? Ha!"

"Grandpa, we've gotta get your shoes on."

When I visited home for the first time after moving to New York, I went to see Grandpa in the nursing home. My family had warned me that he was no longer communicative. When Grandpa saw me, all he could do was smile. I think he smiled. I know I wanted him to smile at me, but I can’t quite remember if he did.

"His feet have been swelling," says my Dad. "That's why they've got those elastic socks on him. They say he's not moving around much anymore"

"Oh… They look uncomfortable. Did they have a doctor look at it?"

"Yeah, he says 'put the socks on him,'" Dad replies with a raised brow and the hint of a shrug.

He doesn’t make eye contact, just mumbles and grabs at his foot. At some point he stops struggling and seems restful.

"Maybe we shouldn't talk about his feet anymore. Do you think he still follows what we’re saying?”

Over our shoulders, we hear one of the other dementia patients yelling out to the room. She’s sitting up in her chair, a hospice-type comfy chair that has an eating tray attached, locking her in. Her hands are pressed flat against the tray, poised as though she’s trying to get up. Her white curly hair seems to be sticking up on end, and her pallid face displays a look of sheer terror.

"What's happening?" My sister Anna is sitting next to me. She's worried. "Should we do something? I want to go talk to her."

She walks cautiously to the woman.

"Hi, can I help you with something? What's wrong?"

"I need to talk to David! He doesn't know about the car -- he has to sell it! Do you have a phone? Can you call him? Call David! Please!"

"Well, I can't do that, but I'll ask one of the nurses if they can help you. Will that be okay?"

Anna goes to the nurses' station to ask someone to come over, then she sits back down with us.

"It's so scary -- I can't tell if what she's worried about is real or not. She seems horrified. But the nurse is coming."

"Yes, Mrs. Matthews," a nurse comes over to console her. I can read in her face that this has happened before. "We're going to get your niece on the phone. Do you remember Avery? She's gonna call in a few minutes and you can talk to her. Okay?"

"But I have to talk to my son! He's in Hawaii -- call his wife…I-I can't remember her name. What's happening to me? I feel like I'm losing my mind!"

We go silent, after a collective gulp! Grandpa sits there, peacefully, happy to be among us. He is smiling. I just know it.

Though he could no longer hold a conversation, I can imagine the one we would’ve had:

"Do you ride on the subway?"

"Yeah, Grandpa, I use it everyday"

"What about the Brooklyn Bridge, did you see it?"

"Last summer, I walked across. Got some cool pictures on my phone if you want to see."

"Who's the Mayor there now? It's not Bloomberg any more, it's that other guy, what's his name?"

"That's right. Di Blassio. Yeah, no one likes him. You know Giuliani wanted to be President."

"Oh that's right; against Romney or something…"

"Did you find a good job there?"

"Well I'm working as a bartender right now, but hopefully I'll find something more interesting soon. I don't know it pays my rent and I’ve made some friends."

"Do they have any pretty girls?"

"Yes Grandpa, they have some pretty girls in New York City."

When I got back to the city, it felt new somehow. I had to learn to experience it for myself, instead of holding on to stories share with him. The place that I once knew as Grandpa's City became My City.

He passed away a few months later. I lost a lot in that moment. I think of times with him often, but maybe not as often as I should: about lazy Sunday evenings staying at his house, going out for pizza, the science magazines he would set aside for me to read. But just as his city became mine, those memories are only mine now. His death left with me the responsibility to watch over them, like he watched over me.

Hey man, It's hard for me to give feedback for another writer if they're beyond an elementary level. It's hard for me to say, maybe THIS would have been better, and maybe leave out all THAT stuff; because it's your story, it's not mine, and if you believe in it then go for it. When I read your story it made me feel warm and sad inside. That's a compliment. It's a very simple, sweet little story; and it's the kind of thing I could find myself writing. Most of the time when I read stories I am unimpressed. When I read yours I felt insecure at parts. That's another compliment. Just keep doing what you're doing and expressing yourself. Well done. Rob.

I liked the idea behind this touching story, especially the lament associated with the protagonist's desire to reawaken his relationship with his grandfather through memory and shared experience, both of which are inevitably deteriorating. However, in my opinion, this lament could have been deepened and the protagonist's struggle could have been more pronounced had you paid greater attention to setting description, conveyance of mood and character development. Your writing can be a little prosaic, at times. That said, there are many good things to build on here.

As with my other comments for the other contributors, I can only make tentative remarks. The topic/subject: of memory of place, is good - and the contrast of the early optimism of the narrator with the sad and bitter ending is strong, and unexpected, in a positive way. If I have to make some negative points, I would say that the overtly positive descriptions of the past begin to feel a little too idealistic (but this idealism, of course, helps along the tragic contrast at the story`s end). If the narrator had finished the story with even more doubt and confusion, I think the effect would have been more profound.
Tweets by @thepenfactor