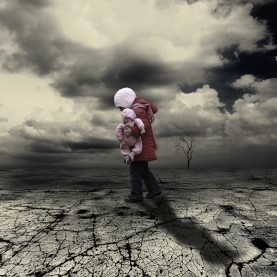 An unnamed female protagonist describes her thoughts and emotions upon coming back to her hometown, which has been ravaged by the brutality of civil war.

When we finally got back after months of living like nomads, we saw that our town was devastated. In fact, it was flattened. No buildings or trees remained in their original integrity to provide us shelter from the searing intensity of the summer sun. All that was, all that we once knew, it seemed, was reduced to rubble and dust. Our house, once a solid stone fortress, was merely a skeleton now, a shell of itself weakly protecting a square hole filled with broken bricks, splintered planks, crumbled concrete and dust. My bedroom, which used to be at the top of the stairs on the second floor, was gone; the space it once occupied reverted back to thin air.

Upon approaching what remained, we were all visibly moved. Eyes watering, legs aquiver, we were reluctantly drawn to the scene by a spirit we didn’t completely trust and couldn’t quite identify. Squinting up at what was left of our house, my father let out a long exhale of defeat. An almost inaudible “home” escaped his desiccated lips. The enemy’s artillery, I guess, even aimed to destroy memory.

What used to be our fridge and stove were almost unrecognizable among the ruins. They were grossly discoloured and stood as if purposely placed amidst the rubble like pieces of pop art. They stood cold and alone like so many other appliances that survived the bombing, looking so far removed from each other and so far removed from what they once were, broken and abandoned in a desert of dust. I couldn’t imagine that I ever went to that fridge for food or that I ever baked cookies in that oven. The thought of how much time we must have spent keeping those appliances clean depressed me.

We found the house by instinct rather than orientation. Most streets were missing signs and the roads were blasted to bits. Asphalt mixed with broken brick and loose stone made walking a challenge. When we finally got there, Mother was quieter than usual, as she was throughout most of this trip. Her body, which she always carries erect, was hunched over as if she were trying to catch her breath, and she moved as if she were caught in high winds coming off the river even though the air was thin and deathly still. I must have lost some time while we were there because the next thing I remember is Mother falling to her knees in the dust that covered what used to be our front steps, clutching my old stuffed bear (that remained miraculously intact) in her left hand. In her right hand, she had a firm grip on my brother’s framed elementary school graduation photo. She didn’t seem to notice that the glass of the frame was shattered and that the blood dripping rather fluidly from her cut thumb was being absorbed by the dust below. “My baby boy,” she sobbed softly in appeal to the dry, unaffected air, “My baby boy.” I’ve given up asking Mother how my brother died.

I hope to be starting my studies again soon. But, for now, I’m spending a lot of time reading books I’ve rescued from the rubble that used to be our town’s library. I’m reading as much as I can on as many subjects as possible, so I won’t fall too far behind. I’ve found some good books in English, too. I’ve been reading them like crazy because, like Father always says, “The gift of a second language is like being given a second life. … But,” he adds. “If you don’t tend to it, you will lose it … just like love.” After seeing the state of the school I attended, I know I will have to study independently for quite some time. It is broken even worse than the English my grandmother speaks.

The population of our town has been cut in half after losing so many to out migration and the violence of war, but we are rebuilding. Tractors have been brought down from the countryside to clean up the mess and I can hear hammers hitting nail and board throughout the day. The piercing sound of electric saws cutting through planks is now a beautiful sonata that soothes and stirs positive emotion.

We all believe we can be a community again. Five hundred of us have been living in what used to be a farm equipment warehouse. We eat what is given to us by the UN, as well as what we can find or catch, and sleep on government-supplied bedclothes or those retrieved from the ruins. Between studying, helping with the preparation of food, watching the younger children and assisting with the town’s reconstruction, there has been little time to rest. But, after all, we live like a big family; there is comfort and strength in that. We will persevere.

Any night there is time before the children go to bed, I play hide and seek in the dark with them. There is an abandoned barn not far from the warehouse that serves as the perfect place for the game. With the doors closed, it becomes pitch dark in the barn, and, deprived of the sense of sight, all ears are acutely attuned to the spontaneous squeals of laughter as children are found. It’s as glorious and monumental as the sound of childhood being discovered for the first time. I love that game and I love the children’s laughter because it reminds me that certain things can’t be taken from you: like memory, like hope, like love.

Rebuilding is a constant preoccupation. Everyone’s a part of it, but the town is segregated more than ever. Peace is a difficult process only because people have memories and the kinds of atrocities that were committed against humanity here cannot be forgotten. The corpses of the dead, the physical and emotional wounds of our people, the rapes, the rubble that used to be our town are too fresh, too old, too eerily familiar to be forgotten. I feel like I’m sleepwalking in front of a mirror that never ends, that reflects a reality I’m unable (and unwilling) to see. Frustrated that I can’t get back to the time before the war when my brother was alive and my home was whole, I opt for the nightmare that plays in my mind rather than the one the mirror reflects. Although my own, I’ve convinced myself that it’s someone else’s reality I’m both watching and playing. I’m sure we can no longer live as we used to: as a town divided but still united by commonness of purpose, by a collective love of place, of community, despite our ethnic differences.

I live every day anxious and guarded, afraid to express anything that might be interpreted wrongly, and I feel divided between what I would like there to be and what is. Things are relatively stable now, but I still fear things will never settle. Mother spends at least one hour every afternoon in the basement of an old church. They have meetings there. These are run by women for women and seem to be done in secret. I see mostly young females lower their heads and speed up their pace as they try to enter the church unnoticed. Nobody will tell me why they go there, but I have my suspicions. I have read about the rapes that occurred during the war and pray for the victims.

We have become removed. We are merely spectators of our own post-war drama because living it requires more emotional strength than we have been given. All we can do is watch and move as if dreaming while sleepwalking, unable, or perhaps, unwilling, to digest the full extent of what is happening and what has happened inside and outside the nightmare. At times, my anxiety is so intense I get physically ill. I am thirty pounds underweight. I am malnourished. Simple tasks require the greatest amount of effort. I don’t sleep and always feel drained. I go through long bouts of not being able to catch my breath. I fear for my life, my home, my heart, my mind, my body. Father would leave again, but Mother won’t go. She says she cannot leave the land in which my brother is buried.

I love this land as I love myself. Pieces of me have been taken by its destruction and corruption. I love all that was, all that has fallen and I love what is buried beneath it. But lately I’ve been drawn to thoughts of places others occupy in the world, and wonder who I could be in such places, places where devastation and terror are just words that you hear.