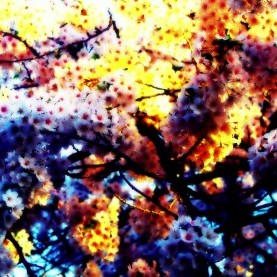 "Hell Found Me" is a writing prompt given to me and I wanted to challenge myself into writing completely outside of my genre, Contemporary Romance. "Hell Found Me" is about a Demon's inner monologue on how it feels to be in our world. There's bitterness towards us humans because we seem to have it so easily, but there's also an inner longing one wouldn't peg a Demon to have.

After all the running, the hiding, the pleading and the fear—oh the fear—I was found out and this time there would be no escape.

The day started like any other, I was working with my hands deep in the rich soil of Mother Earth. The sun beat at my back sending droplets of sweat down the slope of my throat and past the collar of my long sleeved shirt. The humid August weather too much for most but I always reveled in stifling heat, being what I was and where I’m from I should want the exact opposite of the brutality of a Midwest summer. Others like me always headed north as quick and as quietly as they could, they all went north in a desperate need to forget where they came from. Not me, I needed the heat. I needed to be reminded of what all I left behind in case a ridiculous moment of nostalgia tried to overtake me—like that ever happens.

Getting out is all we think about, that and chaos.

Freedom, something we don’t have unless we take it ourselves and even then there are high prices to pay. Whoever said ‘Freedom isn’t Free’ knew what they were talking about. Freedom is just another noose around your already rope laden neck, what was one more?

Pulling my hands from the damp soil I inhaled deeply, one of the few pleasures this world had to offer and it was air that did not burn when you breathed. The warm scent of newly turned dirt, mixed with the cloyingly sweetness of the flower beds at my right and left made me dizzy. I only inhaled deeper. Squeezing my eyes shut when the world began to spin, there was nothing like the smell of life in the air. This world is brimming over with life, despite the atrocious bugs that crawl around claiming everything and destroying what didn’t suit their needs at the moment.

The air stirred around me cooler than before, I peeked from lowered lashes scanning my surroundings nothing but me, the birds and the bees. I forced my shoulders to drop from my ears, forced my muscles to relax and my lungs to draw in another sweet breath. It was nothing, just the weather, Missouri’s known for its multiple personality weather. Just chalk it up to Mother Nature wanting to be like Sybil.

Pushing back into a crouch I attempted to brush off the mud caking my jeans but only made more of a mess. Standing to my feet with a sigh of content I adjusted the red ball cap on my head, holding my hair from my neck while obscuring my heritage in the process. A lock of white blond hair escaped from the knot beneath the hat, I shoved it behind my ear casting a wary glance around the area. Being outside there was always a chance of being found out, the Wards that obscured my identity only went so far from the house and I never wore the one for my neck when safety was only feet away.

Looking down at the perfect row of orange and yellow mums at my sneakered toes, a dose of unabashed pride swept through me, quickly followed by a gallon of disappointment because there was none to envy my work. I was alone. A need to destroy welled up in the pit of my stomach rising swiftly like an inferno, I raised my foot determined to stamp out that empty feeling, when a cool breeze wrapped around me bringing with it the smell of sulfur and something inhumanly sweet.

Thousands of years of instinct and servitude demanded I drop to my knees and bury my face in the dirt while I begged in the tongue of the chosen sheep, something He got a kick out of. I turned slowly, the wind kicking up knocking off my hat sending my long hair in a white halo about my face.

He stood in front of me looking like he had from the very beginning; beautiful. A crown of dark curls framed a strong jaw and sharp blue eyes surrounded by thick black lashes. Stunningly beautiful is the only way to describe Him. Unearthly, isn’t far from the truth.

I should be running, poofing out of existence onto another continent where hopefully I can run long and hard enough before he ever catches my scent again. I don’t move though, I don’t dare. A cruel smile splits his lips revealing a dimple on either side of his cheeks, heart-stopping-soul-shatteringly beautiful.

In a blink he’s in front of me, his fingers wrapped around my throat lifting me up to meet those dead eyes. My toes barely touch the earth he’s so tall. A gurgle escapes my lips as his fingers clamp down tighter around my throat. I don’t dare move or breathe or beg.

“Caught,” he smiles and that’s when the pain begins. Fire laces up my veins bringing forth all that I am across my skin, black scripts written in a dead language cover every inch of my skin searing me like that of a branding iron.

The list went on and on . . . it is all that I am all that I can conjure and make mine. The words were tattooed across my skin like a slave—His slave. A single cry tore past my lips as the last word carved its path across my chest: Death.

He brought me down so our noses brushed, a shiver raced through me alike with the fire eating at the soles of my feet and traveling further north.

“Mine,” he spoke his light eyes glittering with triumph as the last of the fire consumed me, pulling the noose tighter about my branded neck.
Hell found me, with no means of ever letting me escape a second time.

I admire your ability to explain simple actions in a more creative and beautiful way. such as "A cruel smile splits his lips" even within this small sentence, your good choice of "split" also creates more harsh and even sinister feel to the antagonist. You also have a great way of leaving small details for the viewer to gather assumptions by themselves. I respect writers that can write without spoon feeding, you have a good ability to put the reader in the right direction without giving them a map.
Tweets by @thepenfactor