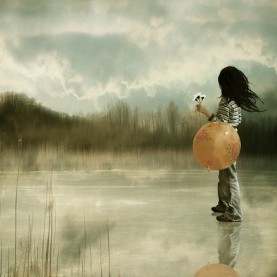 In a future society devoid of plantlife and dominated by synthetic medication and technology, an underground uprising begins to advocate shocking ways of managing overpopulation and malnutrition. Driven into hiding, Evie, a curious young woman, flees the city and discovers a peace-loving commune of gardeners who have managed to preserve a natural environment. She feels immediately at home, but will this be the magical Utopia Evie thinks? How much do we need scientific progress, and how much is too far?

Once upon a time, the world was filled with foliage. Soft grass tickled underfoot, and moss and fallen leaves carpeted the forest floors, transforming from vibrant emerald in the spring to crisp orange in the autumn. Ancient trees stood proudly, whispering their wisdom to the gentle breeze, while their roots sank deep into the cool earth like anchors. It seemed as if they had been there since the beginning of time and would remain until the end of days. Sadly, this was not to be.
In these days of vibrancy, a thousand scents radiated from the blooms of roses and lilies, lavender and sweet-peas. They made the world a brighter, more varied place- a spark of illumination in a society full of darkness and monotony. However, as time went on, humanity’s voracity for plant resources increased. As the trees were plucked from the ground, sawn and shredded- brutally hacked apart- the blades of grass began to shrink away. Flower buds became afraid to open. They shrivelled up and withdrew back into the ground. The consumption of the trees became more and more rapid; lush green spaces were replaced by cold, grey concrete. The colour began to drain away, like a painting left out in the rain.

As the world on the ground became evermore grey, so too did the air above. Pollution and smoke choked the sky, filling the atmosphere with a dense and oppressive layer of smog. The rate of the violent decline increased, spiralling, until one day all the flowers had disappeared. No leaves rustled in the breeze, no petals floated from the blossom. The planet was now devoid of plant life and barely able to breathe.

Measures were taken, plans were implemented, and contingencies were followed. But by the time the pattern of events was recognised and deciphered, it was too late. The situation was too desperate. Too much had been consumed and we had become too reliant on the natural resources. The resources were gone.
And so it came about that a generation was to grow up in a landscape of tarmac and paving, without a blade of grass in sight.

Evie leaned on the plastic countertop, resting her chin on her hand as she gazed out of the window. Raindrops slithered their way down the window pane in rivulets, collecting in puddles on the peeling paint of the windowsill. The days were monotonous; as bland as the city’s surroundings. Evie often found herself gazing out of this window at work, wondering what more there could be. She was baffled by the way communication had reached an all-time low, and darkly amused by the irony of it- pedestrians filed past the window, heads focused intently on the phones and computers in their hand. They were fully tuned into these gadgets- wired and connected, yet completely isolated and indifferent.

Of course, generally, customers were polite and civil when they came in. Evie had never had any real problems or complaints and had been working at the dispensary long enough to know most of the vitamins and supplements by sight and smell and she could easily work out the dosage needed without consulting the guidebooks. The doses had been increasing at an alarming level, however, leading to shortages and waiting lists. Customers would only remain polite and civil for so long. Frustrated with waiting, they began to look elsewhere for medication. Impatience was building within the town, and rumours of ‘super pills’ had started to spread. Having done the necessary training to gain her dispensary qualification, Evie was sceptical of these so called ‘miracle’ multivitamins and it concerned her that people may increasingly be ordering dodgy prescriptions over the internet, rather than coming into the store and having to endure face-to-face interaction. But it was evident the shop was getting quieter, the days dragging on, longer and longer. She wondered what would happen next…

In an attempt to shake off the bad mood clouding over her, Evie decided to take a trip to the supermarket on her way home. Besides, the cupboards were bare; she would need to stock up soon. Loosely dragging a metal basket by her side, she traipsed up and down the supermarket aisles, as rows of tins and packets towered either side of her. She reached for a tin on the right hand side and looked blankly at it. The front of the label was plain, giving no indication of what lay in wait inside, and the back was covered in tiny print. The list of barely-pronounceable ingredients stretched on across the plastic coating in intricate columns: Erythrosine BS, Ascorbyl Palmitate, Sodium5-Ribonucleotide, Azodicarbonamide… Like most of the shoppers in the supermarket, the words meant little to Evie. That’s just what food was made of. Few knew how the ingredients were derived or put together in the laboratories and fewer still questioned it. They merely accepted, bought, and consumed. An ongoing cycle.

Evie chucked the tin into her basket and grabbed another couple of items from the shelves. As usual, nothing much enticed her, so she headed home to cook the ambiguous meal. As she walked through the store’s automatic doors, a flash of LED light caught her eye. An intriguing message scrolled across one of the digital information boards, sandwiched between supplement advertisements and loan repayment warnings.

As suddenly as it appeared, the strange message vanished. Puzzled, Evie frowned, wondering if it had just been a figment of her imagination. She continued on her journey home, keeping her eyes fixed on the dull pavement below her scuffed trainers. She went through the daily routines that needed to be completed. She took her next prescription of vitamins, and lay in the Solar Reactivation Booth for an hour for her daily dose of UV energy. Since the demise of plant life, sunlight and oxygen had to be artificially introduced to the human body. At first, this had caused a sharp drop in the population but increasing scientific knowledge had now developed synthetic procedures the government and medical boards insisted could be just as effective as the old ‘natural’ ways of life- if not more.

Once she had soaked in the rays, she sat at her dressing table and contemplated her reflection in the mirror. The oval frame was an heirloom made of real wood. It had been handed down by her grandmother and had a hairline crack down one side that had gradually spread over the years, sprawling across the glass in tiny gossamer threads. She wondered how many people had gazed into that very mirror, and what they had seen projected back at them. Behind her, the curtains had not yet been drawn and so the likeness of Evie’s room ricocheted off the black panels of the window, echoing her solitary form as she perched, motionless, at the dressing table. The small room suddenly felt oversized and more lonely than ever before.

In the kitchen, Evie scooped her dinner out of the tin, placing it in a suitable dish before setting it off in the microwave. The hum of the microwave oven whirred on in the background as she flicked through the channels on the television, unable to settle on any particular programme but enjoying the rumble of various voices and laughter. After a couple of minutes, the microwave beeped, announcing the meal to be ready. She opened the glass door and was greeted by a standard- though not unpleasant- ‘dinner’ smell.

Unusually, the green LED numbers on the microwave appeared to flash on and off a few times, citing the number ‘14’. That was odd, it had never happened before.
The bizarre message at the supermarket came to mind. Eat pure? What did that mean? She had found herself increasingly disconcerted by the food on her plate recently and wondered if maybe 14 Spartan Street could offer some insight into why it was bothering her and, indeed, where the products were coming from. Today was Wednesday. Pushing the unappetising dish across the kitchen surface, she decided to get an early night and seek out some answers tomorrow at 8pm.