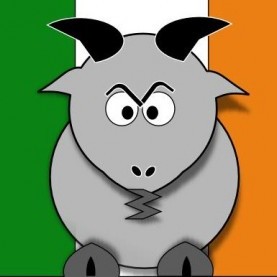 A struggling writer battles with his protagonist.

The author leaned back into his chair. He stretched, cracked his knuckles, and slumped back into the seat. Done, he thought as he scanned the screen. After an entire weekend of slaving, I’ve finally gotten the first chapter done. He smiled, pleased with his accomplishment.

“Hey buddy. Yeah, you,” the author heard. He glanced around the room. There was nothing. He waited in expectation, then shrugged. From within his head, he heard the voice again. “Listen, dumb-ass, I’m talkin’ to ya.” The vernacular was familiar. Like they would use in a gangster novel. His gangster novel. The voice was moderately deep, with gravelly undertones. The brogue was early to mid-twentieth century Chicagoan.

The author scoffed back at his creation. Great. A protagonist with an attitude.

“I heard that, Arthur,” said Protag.

“That’s not even my name. My name is…,” began the author.

“Whoa, don’t care. I’m the lead in this feature, ARTHUR. I call the shots, and you should be grateful.” Protag continued, “You need me. There’s a reason you’ve never been published, you know? Weak characters from a novice writer. We’re not even referrin’ to you as an author. You ain’t earned that title yet. Arthur is close enough, see?”

Arthur seethed. He’d never been talked to in this way. How dare this angry little voice berate me. Me! An aspiring writer just fifteen more chapters from greatness. He began typing again, quietly. Only the staccato tapping of the keyboard could be heard. At each SPACE and RETURN, a punctuated CLACK resounded through the room. After a few minutes, he stopped, reviewed his masterpiece, and smiled. There you go, wise-guy. Let’s see how smooth you are now.

“Oh, that’s great,” screamed Protag. “No arms. Ha-ha. Very cute, funny-guy. I’m a boxer for crying out loud. A BOXER. What the hell do you expect me do now, genius? Bite opponents in the neck? Shuffle around the ring, chewing windpipes for titles? Fix it.” There was a long pause. “Fix it NOW.”

Arthur enjoyed ribbing Protag, but he had made a valid point. In a gangster novel starring a crooked fighter, the protagonist needed arms. He thought hard about how to proceed. It irked him, though, to give in to his character’s demands. At least, he thought, not without some satisfaction.

The keyboard came alive. Arthur focused on his character. He created depth, emotion and inner conflict. Protag sat quietly on was little grass the author had described. Pastoral development was another of his weak-points. Arthur was an action man. He could animate sword fights, car chases, and exploding hovercraft with pen or script. But scenery, thought the protagonist, not so much.

Suddenly, Protag felt different. His arms were back, but his boxing shorts were replaced by tweed slacks. He tried to speak, but had to remove a pipe from his mouth. He began, “So you have re-assimilated my appendicular appendages. And you bestowed upon my person the cranial capacity of a Nobel Laureate. Very droll, what-what.” He paused, obviously surprised by his own voice. “Am I, perchance, a subject of Her Majesty, the Queen? If so, my good man, this is highly uncharacteristic of the setting in your prose. Quite.”

Arthur laughed so hard he passed gas. He rolled out of his chair, near hyper-ventilation. Got you, you little shit. Serves you right. After several minutes, the hysterics subsided. Arthur clambered back into his chair, and addressed Protag directly.

“Yes, my annoying friend,” he began. “You are no longer a Chicago boxer. You,” he continued, still smiling, “are my greatest creation. The apex of my ingenuity. You are a Victorian detective tracking down serial killers. You are, if anything, over-developed as a character. With both action and a compelling lead, how could this novel fail? HA. What say you to that, oh mighty Protag?”

“By Jove, how cliche, old man. Could you rename me ‘Sherlock’ and write in dear ‘Watson’? Think, Arthur. Speculate on the unknown. Contemplate those phenomena in which your peers have not yet delved. Create original prose, my good man.” Protag sneered at Arthur, and added, “You, sir, are an artist. A weaver of second-hand yarns; a carver of wooden scenes. You are unenlightened. An author, you are not.”

Arthur’s eyes darkened. Protag could see the veins in his forehead pulsing. He lunged at the keyboard and started furiously pecking. Protag could feel his character changing again. He tried to chide Arthur, but his voice could only sing words in verse.

What the hell have you done to me?
Oh, great! I speak in rhyme?
Prepare for wrath, my vengeance, see?
I’ll get you back in time.

Arthur smiled, and continued working on his latest piece. A world that would teach Protag a lesson.

Listen, jack-ass,
before you pass
the torch in another piece.
Listen well,
or I swear to hell,
your reader won’t be fleeced,
by your wooden men
and a plot so thin
it has to be pushed or carried.
Because your detail
is destined to fail,
I pray that your target can’t read.


The author continued working, as the setting grew wider, absorbing the horizon. He slapped the SAVE key and leaned into the screen, thinking, I’ve got something for you now, ass-hat. I’ve had just about enough of your heckling.

A cavern, Protag noted. He surveyed his surroundings. They were rich, detailed and vast. I’m underground, or in Hell. Either way, its stifling and unpleasant. He addressed Arthur, and noticed his voice was contemporary Californian. Thank God I can speak in prose again. “Whoa, dude,” he continued, “What the hell? Where am I?”

Arthur did not reply. He simply exposed a mirthful grin. Figure it out, jack-ass. I’m done helping you.

“Told you before, ARTHUR,” Protag said, “I’m in your head. When you think something about me, I hear it. Fine, then. I’ll mull around and push this crappy plot along.” He added, “That’s what I’ve done in all your previous ‘masterpieces.’ Why stop now, right?”

Arthur began grinding his teeth, while Protag made his way down the cavern.

The lighting was poor, but a phosphorescence provided a pale hue with which to see. Stalactites hung precariously from the ceilings. Many had joined with their floor-born partners into huge columns. The cream color made the constructs appear as if Greek marble had melted into candle wax. What vivid detail, thought Protag.

He heard a low rumble. The ground shook a bit, then stopped. Tremors, he thought. And then, cracked rock and stone fragments began to rain down. Protag turned to run, but Arthur had deleted the entrance to the cavern. He could only go forward, towards a low-level glow. Protag sprinted ahead, dodging boulders and debris, suspecting the entire time that Arthur would crush him.

The cavern narrowed into a recess, which he entered. He was protected from the falling stone, but quickly realized why he’d been driven there. A rising lake of lava was bubbling, spewing and frothing in Autumn shades. He could smell the sulphur in the air. He heard Arthur’s thoughts as he took in his dilemma, What to do, what to do? If you backtrack, you’ll be crushed. Push ahead, and you’ll be consumed by the flames of Hell.

Arthur was floored. “How can you be smiling? I’m killing you off, you enraging guttersnipe! You haven’t got a chance. I developed you fully; forced you into conflict and sacrifice. You are in a unique scenario vividly portrayed in exquisite detail. I planned this narrative from the start, meticulously scrubbed for redundancies and exclusions. Your fate is sealed. The text is perfect in every way. It’s been PROOFED. Dispute it if you can,” he smugly challenged.

“I cannot,” said Protag. “All that you say is true. You did everything in your power to defeat me. You truly have proven apt in the descriptive arts. That is why I’m smiling, AUTHOR. You have learned the craft. Enjoy this masterpiece; for it is the first of many.”

Protag moved towards the lava. He looked back, and nodded. “See me, Author. I am more than your protagonist. More than just a name. When you are writing, remember me. I was your muse.” He disappeared into the molten rock without a sound.

The author smiled, knowing this was all for dramatic effect. Protag could be edited back in a matter of seconds. Protagonists are eternal, as is each man’s muse. He leaned back into his chair, and closed his eyes. He relaxed, knowing that he had awakened to his art. He was a writer, now. An author, with a muse.