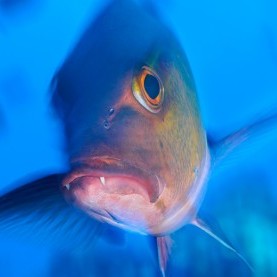 Ok'in'mga has a hunch that his people are wrong. An opportunity presents itself to bring a better understanding of the world to those around him, but requires that he break their trust in order to achieve it. He takes their fate into his own hands. What is the difference between a hero and an egotist?

Instinctively, he knew no one had seen it before. No one from the village would ever come to this island. It was cursed, they told him.

“Stay away from that place, Ok’in’mga!”

The fishing hole was cut deep into the bank and hid behind by a cluster of mangrove trees. An fisherman paddling by – a fisherman who respected the laws of Tapu – wouldn’t have seen it. But Ok’in’mga approached it from the opposite side, after a day loitering in the cursed jungle in the island’s center, climbing through mangled old vines and lazy hanging branches.

Get closer, he imagined his Grandfather telling him. See what you can find!


Grandfather always understood him best. Once, on a hot afternoon, Ok’in’mga sat in shade marvelling at the tallest tree in the village. The lower branches had been picked over, but at the very top, a big, juicy bundle of breadfruit hung, swaying in the branches.

“I will take it,” Ok’in’mga told himself.

As he struggled to find foothold in the thin branches near the top of the tree, a crowd gathered.

“Get down from there, Ok’in’mga,” his mother screamed. “You’ll break in half when you fall on those rocks!”

“Let him climb,” Grandfather said. “If no one else will reach the top of the tree, he will!”

This cursed island was the same: if no one else would fish here, Ok’in’mga will. He fought his way through the brush to the edge of the broad pool.

Once he could peer down into the deep, clear water, he saw that it was teeming with fish! Silver, striped ‘ono, ugly utu, sinister and slender haku, even a sparkling, yellow koango! But amongst all the fish he knew, the pool was home to one unfamiliar to him. Ok’in’mga counted seventeen of them before deciding there must be at least thirty. He watched one drifting through the water slow and fat, with a top fin so tall, it wilted under its own weight, flipping to the left when the fish turned right and flopping right when it turned left. Its sunset pink scales were flecked evenly with dark maroon dots that faded to pale yellow towards the tail.

“I will catch it,” Ok’in’mga told himself.

He turned back to get his spear.

Back at the village, the suspicious eyes of the elders inspected him as he presented his catch to them.

“Where did you find this fantastic fish?” the chief elder asked him. “We don’t recognize it.”

The chief would not ask him directly what he wished to know: was the fish cursed? He didn’t want to bring bad fortune on the people by eating fish that had been caught improperly or, worse, stolen from a neighboring village. There were plenty of ways a fish could become cursed. However, to ask Ok’in’mga if he had violated the laws of Tapu would violate custom. An elder could only demand the respect he gave to others.

“If there are more like this, we would like to find them,” Grandfather said. As the most recently appointed elder, his authority in the matter was limited; here his role was merely to mediate. “It could be good for the village, boy.”

Ok’in’mga could not tell the elders where he caught the fish. Tapu dictated the lives of people, and the matter was clear: the island where the fish was caught was cursed, so the fish must also be cursed. No one would eat the fish if he told them. In fact, he should have his canoe taken away for setting foot on the island. What would people think if he had brought cursed fish from a cursed island back to the village and given it as a gift to the elders?

But the people must be wrong – the island wasn’t cursed. In fact, it was beautiful. He had spent all day there, and nothing bad happened to him. Tapu had nothing to do with it. The only bad that can come to a man is the bad that he brings on himself.

“Well…” His eyes searched the sand before looking up to address the chief elder. “I can’t quite remember where I found the fish. Though, maybe it doesn’t matter. I’ll prepare the fish, and if it isn’t fit for the elders to eat, then we’ll give it to the pigs.”

The elders rarely spoke when they conferred. Their necks turned rhythmically, back and forth to look at each other and at Grandfather; a conversation unfolded in the vague language of facial expression. They respected Grandfather; his grandson was reckless and brave and had much to learn, but he wasn’t malicious. They suspected that he had found the fish near a neighboring village’s island. If this was the case, there could be political trouble. However, theirs was the largest island, filled with the most resources and the strongest people. In the end, some grievance might be made by one of the other villages, but could soon be mended. This would be a good lesson for the boy to learn: all actions have consequences that affect others. He could lead them to the fishing hole in tomorrow. They would play Ok’in’mga’s game.

Only Grandfather lingered a while longer, eyes cut sideways, studying his daughter’s son.

Did he know? Ok’in’mga wondered. Grandfather doesn’t really believe in things like cursed islands and cursed fish, does he? Tapu is for boys, to keep them from getting lost or hurt or killed. A man knows right from wrong without reciting stories.

Ok’in’mga prepared the fish for the elders that night. While they ate, they sat around the fire and discussed important things like why the tides change and what happens to the sun at night. Before leaving to go to sleep, they all decided that Ok’in’mga’s fish was good to eat and that, in the morning, they would get in their canoes and follow him while he searched for his fishing spot.

The worried young fisherman did not sleep well that night. He dreamt that his younger brother was playing in the shallow water at the village’s edge. Suddenly, Ok’in’mga’s fat fish appeared, but with large, razor-sharp teeth and began to bite the little boy’s ankles. He cried out to Ok’in’mga. As he did, the fish dragged him under the water, and he began to drown. Ok’in’mga lunged into the water and chased down the evil fish. He ripped it, wriggling and writhing, from the water. In one bite, he ate the fish alive, tossing only the tailfin back into the sea. Standing up in the low tide, he looked around him to find his brother, wide-eyed, gasping for air, but alive. He bent down to pick the boy up. As he did, he felt his stomach churning. Retching, he turned his head and vomited the black contents of his stomach into the water. At this point in the shallow bay, the water became murky. Scooping up his brother, he turned around to wade back to the village, but it and the island were gone! Everywhere, all around the murkiness spread further, turing the sea to black and smelling wretchedly of old fish. The pink tailfin that Ok’in’mga had left lay twitching and flapping on the surface of the dark water. Around it, the water bubbled and smoked as if on fire. Slowly, the fin began to grow – one, two, three times its size. As it did, the rest of the fish began to reform. From the tail, it’s curved backbone and belly folded out. As its floppy top fin burst out from the spine, scales started to appear all over its partially formed body like budding flowers in a bush. Meanwhile, the half-fish grew still in size, now as long as a canoe, then suddenly larger than the elders’ meeting hut! Bulging, white flesh, bone and guts continued to pour out and take their place from the tail towards the head of the fish. Ok’in’mga’s brother let out an impotent yelp. He pulled the child to himself, clutching him to his chest. As spiny teeth began to grow like grasses from the fish’s hungry, snapping jawbone, the beast had become now as big as the entire island.

The night was not quiet. The sky was black, but the island was lit by a bright, clean moon. The village was awake. Frightened voices scattered across the island. A rustling approached the hut through the trees, then a set of loud footsteps ran quickly by, towards the village center. There was trouble.

“What is it?” he asked his mother who was already sitting awake.

“I don’t know – I pray it’s not an attack! The islands have been peaceful for so long…”

He got out of his hammock. Glancing at his sleeping brother, the lurid dream filled his head in an instant.

What have I done?

I really liked your story and I am keen to read more. You have a good opening line, and the suspense created really makes you want to know what will happen next. I do feel like the story was detail light in some points. Maybe some more descriptive information about why he chose to break the rules? Was he just testing the myth, being naughty, or was the village starving? Was he compelled to take the apple for his own motives or the motives of others? I also feel that a little more synopsis would help me understand the context of where this is going. Keep working on it, you have good material here and I could see it really going somewhere.
Tweets by @thepenfactor