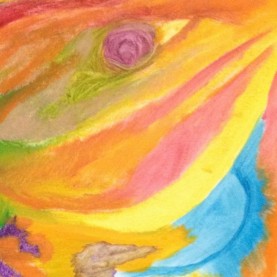 The anguish of the tormented who became tormentors. Interlaced physical and quantum worlds, victims and abusers in a lasting shared nightmare. Prejudice and notions, paranoid significances, surficial and deep emotions, wisdom and godly entities from abroad the cosmos.

The inner world you nourished shall feed from you.The clear waters you turned to swamp shall drown you.The only purity you'll find in me is my hatred.

Telephone booths always caught my attention, not because they are beautiful, but desecrated,broken,squalid,nauseous,pissed,shited,spitted on,bloodied,written,spray-painted,and drawn with swastikas,names of athletic teams and profanities.The rejects of the sidewalks,dirtier than the whores that rent their doubtful cuntguts next to them,more sickening than the half dead-fainted on their shit-junkies beyond,more indifferent from the homeless, my cat's chopped balls-or me.Not even the immigrants use them anymore.Only some lowly gangsters who call for a rearmost death-threat before they kill,and of course, those who scribble upon:"happy ending massage-Yanis","i take it in the ass-Makis","i suck cocks-Billy","shit on me-Antoine".All the same, all fake-i have called.Not that i care about the blowjobs and the massage of every depraved degenerate miscreant for public use,let alone using them as toilets.They are easy targets to appease my anger.

Keyboard.The magic key that unlocks the digital wonderland, the land where you'll find satisfaction which people like me are not born to enjoy in this life.As for me, my vice was to fuck their lives for my amusement.

I had the highest demand pretending the lesbian-pure magnet for the cheap-dirt,they rushed on me like sharks that smelled blood,even literally-there were guys who wanted sex on period,even to lick pads or throw them in boiling water to drink blood like tea-i saw pictures.I was arranging no-show meetings to kill each other with the short tempered ones i enraged-trannies,gays,family men who when you said the things you will do to their children erupted into frenzied paroxysms-exept those who were aroused by the idea.

I am an exeptionally qualified graduate in psychological violence,i've learned from the best-with myself as the guinea pig.In time, i got into the vice of exploding unto others, it became my nature.I admit i adore it.It's easier than martial arts,cheaper,less bruising and more interactive than screaming on a football stadium to your enemies beyond.

Bored of chatting at some point,i began prank calls.I call random numbers at small hours.Sometimes i am serious, i call and pretending i am a father and the daughter or wife of an unlucky family man harasses my son, other times i pretend to be the lover of the husband or wife and i disarray families,or i say that some relative has died.I also pretend to be a cop claiming that their childen have gotten into trouble with drugs or cults, or a father who will sue some poor bastard for the beating and rape of his child.

When some idiot spills a name i grip on it like a moray eel and the frustration gets mythological proportions. I pesuaded a lowlife once that his daughter was fucking an immigrant and i think he beaten her, the phone was still on when i heard the screams and broken glasses.Other times i pretend to be a concerned nice neighbor and tell family men that i saw their wife or their daughter with the neighbor or the son with the man of next door.Family men are overprotective with the supposed purity of their cunts- as if they vomit blue periods-even more with the masculinity of their sons.What people would say? Once i think i caused a heart attack to someone because i convinced him that his sonny gets it in the ass.Other times,when i am bored,i just call and asking for someone who doesn't exist just to ignite fights,cursing with the highest human possible level of vulgarity and perversion using my Nobel price deserving formidable language-molding skills.I have also thought about extortion but i am too dumb for it.

How come they haven't caught me yet?Good question,obviously because i use payphones.Popular wisdom says that "flowers goes with flowers"-or something like that,well i am one of the last users of payphones,because "shit goes with shit".

Now, from their perspective i fully understand the orgasmic emotion my torturers were experiecing.I believe the students must be ablactated from their masters,spread their wings and surpass them.I am dying for a demonstration of my abilities,but it must be happen the right way,or else what kind of student would i be? They should have forgotten everything by now.To forget your victims is the easiest thing.Now they must have studies,careers,families.I will hit them at the highest point,when they have everything to loose,like they did to me.I have lost my sanity irreversibly,they will lose their present.A present which will evolve to a deranged ominus future-an eternal deranged ominus present. It is the time of the reaping, the time of their demotion to my earlly helpless self.

I don't bother,nor having the brain for physiognomic analysis,but as far it concerns me, my torturers gave me the feedback with an open heart.I believe that i must return to my patrons the good or the bad that they inflicted on me.I abhor ingratitude. 5'10", oily skin,sick,thick eyebrows,skinnny,hairy, i sweat easily- and a lot.The edges of my eyes are pulled from their sides diagonally down as if they are hooked-making me look like a retarded incestuous product.On profile-abominable Egyptian wall mural.My long gimlet nose in combination with my rugby ball alike shaped head makes me look like a giant carrot has stuck on it.Maybe the fact that i am still a virgin has an immediate relation with all of the above.That pathetic figure will be the face of their nightmare.

Frequently my mind travels,in sports,videogames,cars,luxuries and random scenarios with no cohesion.Supposed girlfriends and possible lives, feelings and emotions that i will never enjoy,intellectual senilities for how things could have been otherwise if i had been born elsewhere, more handsome,cleverer, and lucky.

The discovery that resulted to be my life changing golden ticket,started by a random daydream about the last remaining payphone users,while wondering for which reason people would scribble on them cheap maliciousness to ridicule someone, instead of letting their anger rage in chatrooms,phones,friends,elderly parents,wives and children.Perhaps there are many multidimensional sadists like me.

It was the numbers.Some numbers were not like the others.Some numbers were too long for phone numbers and after every single one of them a full stop-barely seen.They didn't started with any usual code of landline or mobile phone.Having seen them so many times, my slow mind achieved at last this distinction during its abstract phase.There were just lengthy numbers that didn't make sense.

Like any human who completes a thought or observation, i felt that i should had understood that from the beginning.My experience in the meanningless daydreaming of the eternal pariah blossomed and donated me the thought:"this must be a code".

My job is one of my daydreaming's cravings-the cars.Of course, as a pariah i am not the one who owns them, but the one who gets his hands dirty when their privileged owners fucking their mechanical guts.Always the one who touches but never owns, i wish i had the brain to become a gynecologist-in front of me even the pigs are privileged.So, i wasted my useless time sitting down the afternoons trying to understand those numbers.The vein i hit,no gambler, gold digger or soldier of fortune of my crawling level has ever hit before.What a surprise.For first time, my time was not a waste after all.I am wondering if the successful people feel that emotion all the time.It's time for me at last, to own.

The code was the simplest.A number for a letter, an infant child could have found it,a fact that reminded me of my intellectual place.Gold hidden in plain sight.

I understand that your main character has a lot of issues with his identity and role in society, but where it going? What is the plot? If this is the first chapter of a book, what is the story about? Is he about to learn a lesson, cause havoc, do something beyond shocking? Your description of his actions and thoughts were long and slightly worrying, but I understand this was part of the characters identity. Try to use less adjectives in a sentence. Normal sentence structure requests less than 3-4 comers in a sentence, and sentences of under 35 words in length. It was hard to follow in some parts. Maybe try and use more conventional grammar to make the story more readable.

I feel like your intro was extremely well-written and captivating, but after that, it seemed like there was too many nonessential details thrown in.

Fascinating story. It was dark and creepy, sometimes so dark and scary I became worried about the sanity of the writer. It is very believable and the use of first person enhanced the believability. I feel like you, the writer, ARE this confused, deranged, twisted character. He is multi-dimensional and complex, like a real person. I appreciated that. The major things you need to improve are grammar, spelling, typography, sentence structure and punctuation. The free flowing, stream of consciousness technique was interesting but became quite tiring to read. Your sentences were dripping with so much descriptive content that it was hard to maintain focus and keep reading. Perhaps you could punctuate the stream of consciousness writing with the odd cohesive story or flash back or bits of dialogue. Stay on one particular topic for a little while rather than jumping all over so rapidly. Overall, it was a very engaging story and the final twist was a great hook. I am keen to hear what happens next. He is like the anti-hero.
Tweets by @thepenfactor