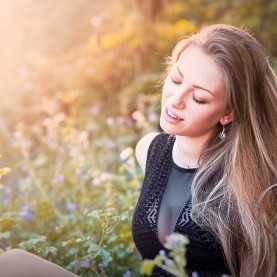 When I got home from the quarry that night, Nanna had wandered off again. I could see the cottage from a ways down the path. She’d left the door open.
It started before Christmas, her forgetting stuff, but she could still find her way around. Come spring, though, I’d get home dead tired, and she’d be gone.
Sissy couldn’t help much. She lived too far away, although she came every fortnight or so to help me and to get Nanna cleaned up.
“What you need is a wife,” she said when we were on the porch, out of Nanna’s earshot.
“Couldn’t saddle no wife with lookin’ after Nanna.”
“There’s lots of women could take a shine to you.”
“Don’t, Sissy.”
Her brow crinkled, like she was trying to figure something out. “Then you gotta block the door, bar it from the outside, or even better, tether her to the bed. You could make it long enough so she could get around, even out on the porch.”
“I don’t know. She might get tangled up and trip.”
Sissy just shook her head.
It wasn’t so bad, taking care of Nanna, ‘cept when I got really tired. Mornings I had to milk Patty ‘fore I went to the quarry. Never time to churn, so I dropped the milk off at Carl’s. Carl made cheese. Traded us vegetables and eggs.
Quarry work’s hard, and if you’re sleepy it’s dangerous. Missed the chisel once. That woke me up. Hand never did heal right. Course, my hands are rough anyway from workin’ stone. Rougher’n a plowman’s.
I refused to leave Nanna tethered. But looking for her in the woods at night—that was scary, peering into the shadows, wanting to find her, and at the same time afraid I would.
Anyway, that night when I lit out hollerin’ for Nanna, somebody answered, and I saw another lantern down the trail.
“Your Nanna’s wandered off?” It was Edward, one of Carl’s sons. He lifted the lantern, his face glowing in the light, all smooth like he’d just shaved.
“Yeah,” I said and glanced down at my feet so I wouldn’t stare.
“I heard you. Came to help.”
“Thanks, Edward.” I called him Edward, ‘stead of Ed. He said he liked it.
“I can still remember when she bandaged up my leg that time I got burnt so bad.”
“Me too. She was always takin’ care of people.”
“Here, you go that path. I’ll take the other one.”
Few minutes later he called out.
When I reached them, Nanna was clutching her rag doll and had her other arm around Edward.
At the fork that led to his cottage, Edward put a hand on my shoulder. “Next time she goes missing you holler ‘cross the creek.”
After that, I tethered Nanna on the days I went to the quarry. It was a long tether, and she didn’t cry, but a week later I got careless and left the paring knife out.
When I called ‘cross the creek, Edward was there with his lantern double quick. We followed the trail she usually took, and when we came to a fork he said we should split up.
“No,” I said hesitantly. “Keep me company.”
“Okay.” He reached over and put his hand on my shoulder. I must have started.
“Sorry,” he said.
“It’s all right.” I wished I hadn’t looked away. What was wrong with me?
We trekked a while before we found her huddled on the path. “I was lookin’ for my baby,” she said, her eyes watering, “but my foot’s got hurt.”
Kneeling, I felt her swollen ankle. Edward put his arm around her, and she leaned against his chest.
We made a cradle, me holding Edward’s arm and his holding mine.
“Comfy up there?” he asked.
“Oh, yes,” Nanna said, clinging to us both.
Edward looked across at me, grinning. His brown eyes… and I looked away, again.
We had to leave the lanterns and only got a little ways before Nanna fell asleep. We couldn’t hold her up straight, so we wedged her tight between us linking arms over each other’s shoulders. My heart thumped like I was gonna keel over.
Almost there, I kinda moved my fingers on his shoulder, and he kinda moved his fingers on my shoulder, too. Course it didn’t mean nothin.’
When we got to the cottage we laid Nanna on the rope bed. Edward smoothed her gray hair, and she turned onto her side.
“I know you love her,” he said softly, “but you don’t show it much, do you?”
Nobody ever said that to me before. I looked down at Nanna and opened my mouth, but nothing came out.
“You know, I think you’re afraid to touch people.”
I turned to the door, my heart racing. “We gotta go back for the lanterns.”
Starting back down the trail, we could barely see and kept running into spider webs on the edges of the path.
We found the lanterns where we’d set them on a rock.
“We shouldn’t a left them burning,” he said.
“Yeah.” I kneeled down and snuffed the wick.
He snuffed his, too, and we stood up, each with a lantern.
Blinded from the afterglow, I reached out my other hand and met his, reaching for me.
“Well, I guess we can stumble back together.” My voice was rough.
He slipped his arm around my waist. I got up the nerve to put mine around his, too.
We started back and the moon came out. I glanced sidelong at him and saw the spider webs, silver in his hair. They were like a veil, and it reminded me of Sissy’s wedding when she wore a veil.
“I was thinkin’,” he said. “You’re kinda by yourself, and it’s crowded at my place. Maybe I could stay with you and help out.”
We put the lanterns down, and I guess the dam kinda busted: I threw my arms around him and kissed him.