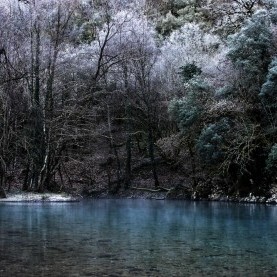 She's running through the forest, trying her best to break free. It all stops when a rope pulls her all the way back to the beginning. It leaves her with a daunting decision. As memories and voices flit through her mind, her struggle becomes unbearable, but eventually she would have to choose. What will her decision be?

She follows the echo, tiptoeing through the forest, navigating through the narrow path between the billowing trees. She pushes through the branches and leaves that fan around her; pushes through them until she can finally see the clearing to the lake. She slowly makes her way down the sandy path, inching closer to the glimmering waters of the lake. His presence feels so near. As she gets closer to his heartbeat, the tug on her gets stronger, dragging her down, weighing down on her every step. Whatever rope holding her back, didn’t want her to meet him either. But she keeps on walking until her legs were moving like rusted gears. Just as she reached the clearing, and hears him call her name one more time, a thought flashes through her head. The sound of laughter resonates through her. “We’ll always love you.” Just like that, the rope claims her , tugging her back until she tumbles through the trees. Her hands shoot out, clawing desperately at the dirt scattered about her. “We’ll come back for you we promise.” The warmth reminiscent of a kiss blossoms upon her cheek. She flinches at the joy of this, but refuses to turn back. Her hands cling more tightly to the ground, yearning to reach him. She needs to find him. He was calling her name in the distance, and her heart thunders in her chest. She struggles against the rope, craving to be free. The poignant reminder of the privation she would face if the rope took away all she conquered to get here, encourages her to pull away harder. She digs her fingers into the ground and pulls herself forward. She must reach him. She didn’t want to look back anymore. He was all she desired.

Lifting herself onto a tree branch, far away from the rope, she peers through the bits of space that the leaves forgot to cover up; she wonders why he didn’t come to her instead. She remembers the days, where all she did was cry over how unfair life was. He had been there to comfort her. His voice used to echo in her head on the days when she didn’t want to wake up. Thoughts of him occupied her on the nights where she lay awake thinking of the future that she ruined for herself. He was there when those people took away her dignity. The simple act of his saying her name had torn her away from the dark moments. When her parents found out that she wanted to go see him, they vowed to keep her away. They punished her and made sure to never leave her side. She felt so trapped and engulfed in a life she didn’t want. When she snaps out of her thoughts, she feels the light tug of the rope on her and she squeezes her eyes shut. “I don’t wanna go back. He’s my only escape. He’ll make me feel happy,” she assures herself. The rope withdrew, and she lowers herself off the branch and drops to the crisp grass and moist dirt below her. She takes a deep breath, contemplates her decision, and proceeds towards the lake.

With each step she takes, flashes of memories spring back and forth in her mind. It’s either him, or the life she knew before. The distance between her and the lake seems to stretch on for miles. Glancing up at the luminous ribbons of silver etched across the sky, she feels less frightened. The moonlight streams down, directing a path towards him. The harmonious tweets of birds fill the air every once in awhile. All these little things make her feel like she has chosen the right thing to do. She feels peace in her mind for once in a million years. It was like the war going on in her head has finally come to an end. Being surrounded in such a peaceful place made her think twice about ending the life that she has grown up in. Just as she thinks that, she feels something wrap around her; she tumbles to the ground. “Please don’t say those things. We care about you. It’s the reason we’re here for you.” She yells out in agony as his voice seems to be left behind. There was a barely audible whisper of her name being called. She hears him one more time before she gets yanked out of the forest. She hastily tries to unbind herself from the rope. It wounds around her tightly and her breath catches in her throat. “Stop it. Don’t leave us for him.” She panics and urges herself to break free. She kicks and screams, willing the rope to let her go.

After hours of struggle, she finally breaks free. Memories of the terrible things she had been through, won her over. So with that, she wanders into the darkness and shelter of the trees once again. Finally being free, the sound of his voice calling for her was loud and clear. Her heart was beating erratically. She feels so close to finally getting everything that she wants. It was in that moment, she realizes that turning away from everything she once knew was completely worth it. She tears through the aged trees, crinkled bushes, jagged rocks, and every other obstacle in her path. From where she stands, she could hear the soft rippling of the water. He was down there at the lake waiting for her. She has never felt such a surge of vitality. As she reaches the opening of the trees, her eyes linger down below on the lake, a black void, with the light of the moon beaming off of it. Her heart continues to thrash in her chest. The smile on her face widens. Tears begin to blotch her cheeks. She was so close to him after all this time. She takes a step, throwing her arms out like she was about to fly. Her eyes skim the plane below. “This is it…” She lets herself go, and plummets headfirst down to the lake. A rush of feeling fills her chest. Her lungs squeeze with something she has never felt before. Suddenly, the beating of her heart slows to a stop. A flash of color blinds her. When she opens her eyes, she sees him. His face looks flustered from the heat of the place. His eyes are endless black orbs that entrance her. His lips curl in an unreadable way. His stare cuts through her soul, and she knows she has finally succeeded. She makes her way towards him, staring into the dark abyss beyond him. He stands there with open arms. A glint of something malicious flickers over his eyes. He gives her a welcoming smile. The devil is he...

Think about what you're trying to prove, what your theme is, for this story and how you can make that come out in the ending perhaps. All I got was a vague, offbeat-angsty feel.

Touching scenes between characters compelled me to finish the story out. Even though there was no possible way for happily ever after, I had to find out the choices the characters would make. I think this is a coolest short story about human's nature, about life and death and beyond. The story with unexpected final scene.

I thought the story was wonderful. It conveyed her turmoil of getting to 'him'. If you were to continue this, it would be interesting to know how she got to such a place. Kudos.
Tweets by @thepenfactor