The Lamb Of Roth 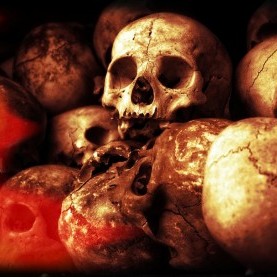 The Lamb Of Roth

A young woman is treated to the best day of her life, but there's always a catch-

He awoke that morning feeling reborn, blessed by the Maker Himself. Besides him lay a young woman, her form concealed by their shared bedspread. While she shifted underneath their cover, he gazed below with tenderness. From his perspective, her back was to him, obscuring her even further.

Undeterred by it, his hand rose up and set against her.

"Come on, Grace," he coaxed her as he rubbed her back. "Time to get up. We've got a big day ahead of us." A muffled groan became audible, evidence to her waking body. With a soft breath, Grace emerged from the sheets, her form disheveled.

"Good morning to you, too," Grace murmured with a shake of her head. "Don't get all uppity on me. Ya know, I only agreed to this for your sake. I know there's some catch, but still."

She ran a hand through her locks, their gold against ivory digits. As she glanced back to him, Henry dropped below to kiss her forehead. His warmth lessened her unease in part, allowing her a glimmer of delight. He pulled back, only for her to gaze upon him like a makeshift idol. "Whatever it is, I can't help but feel unworthy of you-" she muttered, before he cut in.

"Nah, if anything, you're overqualified for this," Henry retorted with a sly grin. "Just trust me, okay?" As Grace peered at him, her own smile emerged. "Relax, today's gonna be all about you, just like I promised. Come on, Enid's been getting ready all night!"

At his call, Grace's mind flashed to the elder woman, to her tireless efforts. She worked to keep their home a sanctuary, neat and fit for the Maker Himself. With the notion in hand, Grace cast her doubt aside, for fear of sullying Enid's efforts. At that, they got out of bed and departed for the kitchen.

"Good morning, Mr. Roth," Enid called out when she saw them. "And you too, Miss Eden. Come up, breakfast is waiting!" Grace followed her command, only to be floored. A king's banquet had been laid out for all to indulge in. All the world's richest foods lay in front of her, prepared with a master's expertise. "Only the best for you, my lamb."

"Enid, you didn't have to go to the trouble!" she blurted out, still in awe of the spread around them. "This is just so-" She breathed in deeply, indulging her curiosity for what lay ahead. Lost to all of Enid's luxury, she filled her plate and ate with relish.

Grace appeared like the fatted calf in that moment, so great was her gluttony. Henry paid her little mind, instead watching Enid as he ate. Likewise, Enid shot him a knowing glance, ready for their great plan. The elder watched her with a morbid curiosity; Lurid pride filled her eyes to witness such delight. When Grace finished, she set her plate aside and beckoned to Henry.

He nodded back, eager to fulfill his promise. True to his word, Grace's pleasure was not restricted to food and drink. He took her out on the town, urging her to sate her greatest whims. What followed was an afternoon of indulgence, devoted to making her shine like the greatest of idols. No expense was spared, not in draperies, anointment nor cosmetics. When they returned to Henry's apartment, Enid gazed upon her radiant beauty.

She appeared a new woman, crafted from the Maker's finest jewels and and gold. As they walked into the living room, confidence radiated from within the woman. Henry trailed close behind, his hands behind her own.

"Henry, this day's been like heaven," she murmured with an ethereal wistfulness. "I never thought I could be this happy! Please, can't every day be like this?" In an instant, he grasped her hands, forcing her to glance back.

"Of course it can," Henry replied with a tender grin. "But only if you do what I say. Is that all right?" His palms were warm, bringing to mind the sun's pure radiance itself. Dumbstruck by her bliss, she nodded obediently. Grace peered into his eyes, silently pleading for his approval. Enid kept her gaze on the woman, her appraising nature unnoticed by either of them.

Lost to her fantasy, Grace's hands left his and she faced him. Crimson lips parted, inviting him further. Before she could kiss him, Henry pulled away, his own mouth agape. Though he'd forced this rift between them, she openly pleaded for his touch. In turn, he grasped her hands once more, encouraging Grace to sit on the nearby recliner. She shot him a wary glance, despair bright within her eyes.

"No, not yet, my idol," Henry coaxed her as she dropped into her makeshift "throne". "There's one last thing I want to show you." Grace nodded back, her brows furrowed in anticipation. His right hand rose, only to drop suddenly. With a final, prolonged breath, Grace nodded once more.

Henry reached into his pocket and fished out a small candy. It was wrapped in sapphire plastic, the likes of which he pulled off swiftly. Grace stared at it, her painted lips trembling. She knew her fear unwarranted, but couldn't help but feel uneasy. Before she could protest any further, Grace summoned her strength, and opened her mouth.

Henry set it on her tongue in turn. A rush of sugar, imbued with a sharp mint, hit her senses. The candy's medicinal properties were apparent, imparting an artificial sort of confidence. It melded with her saliva, creating an intoxicating elixir. Just as the day's spoils had done, it forced her mind to such Earthly pleasures. It beckoned her further, evoking promises of a land of milk, honey and satisfaction.

The candy's flavor penetrated her senses, encouraging her to swallow its sugared fluid greedily. As soon as it entered into her body, she became numb. Neither body nor mind could feel anything, so lost were they to the world.

Grace's consciousness faded, its escape mirroring her own from the mortal plane. She drifted off, forever to want for the land of riches. When Henry sensed she was fully gone, he waved to Enid. With a knowing nod, she approached him, her eyes gleaming.

She kept her right hand behind her, leaving the left open to Henry's gaze. He glanced at Grace, her features painted with an ethereal serenity. When he reached her tender smile, he grinned back with delight. His eyes met Enid's, silent in their request. The elder followed suit, and pulled out her right hand, its palm around an ax's handle.

In an instant, she approached Grace and slit her throat. Blood gushed from within, spilling upon the cloth below them. The pair stared at her now lifeless form, their gaze approving.

"I'm sure she didn't feel a thing," Henry remarked as he nodded to himself. "She's in a better place now. We've done well, she's with our Maker now."

He patted Grace's limp head in turn, caressing her with a twisted adoration. Likewise, Enid nodded back, smugly satisfied by her work. Her cheek dimpled, accentuating the stray paint that adorned it. From her cut, Grace's blood had drained in full, all while leaving her body mostly intact. Such was Enid's skill that she remained peaceful, her features still sedate and dream-like.

"So it is said in Psalms 63:5," Henry recited as he continued to caress Grace's golden locks. "My soul shall be satisfied as with marrow and fatness; And my mouth shall praise thee with joyful lips-"

His voice trailed off, its parting words painted with a brimming adoration. Enid nodded back, and set her ax down. He stole a glance at Grace, then set a hand to his chest. In an instant, his demeanor shifted to a grave sort of reverence. He clapped his hands, prompting Enid to approach Grace's lifeless body.

"I've done my part," he announced as the elder pulled Grace off of the recliner. "I've done well, haven't I? She's a nice one, isn't she?" Henry smiled, proud for his successful efforts; Likewise, Enid grinned back, glad to have such a fine "lamb". The elder took a moment to appreciate her beauty, the splendor they'd so cultivated.

"That is true," Enid retorted as studied the youth's radiant form. "Truly splendid. It is such an honor to work with you. You're just as our Maker would've wanted." Grace still appeared the golden idol of dreams, the most divine sacrifice. With their offering in hand, Enid clutched her form, nails digging into the fine cloth below. Careful measures were taken to ensure Grace's purity, for it would please their Maker all the more. As she carted her away, Henry trailed behind her.

"So shall our feast be grand," he recited once more, his voice full of delight. "So shall it please our Maker, and glorify His word! So have we treated her, allowing her the greatest pleasure for our own!"

I may have been confused at first, but then I realized how good of a story it is. I enjoyed the plot twist, though it gave me chills up my spine. The characters were out of order at times, but we learn from our mistakes, right? Trust me, I'm not perfect, either. I recommend you make something out of this. Good luck!

I think this short story is very real and very strong. Nice work! The protagonist's perspective is particularly powerful in this piece - " "That is true," Enid retorted as studied the youth's radiant form. " Awesome tale. I’m looking forward to more.

Awesome. Chilling and compelling, a great job indeed! I would love to read the whole novel.
Tweets by @thepenfactor