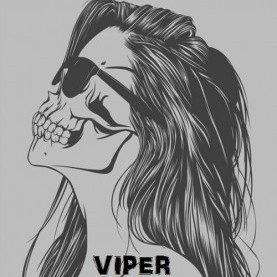 A young survivor hunts for blood for being wrongly experimented on.

The fighter stood sweaty as she continuously hit her punching bag. She has been training for a ages after a horrendous event took place. From that night, all she remembers is the blinding light that stared down at her 24/7. Her name is Aleks, and she is the only one of Masters Inc projects to escape. But escaping came with a cost; half of her face was burned off.

​"Stand still or you will die of blood loss," A female voice urged through her surgical mask. She held up a knife that was ready to penetrate the young womans abdomen. Aleks stopped fidgeting right before the cold metal connected with her torso. She screamed out in agony as they tore her apart. After opening her up, they injected some type of liquid into her bloodstream. That's a tracking device was added into her stomach. String was used then to stitch up the doctors patient.

The doctor noticed a piece of metal penetrating the patient's right wrist. Somehow the sharp screw that held her restraints to the table was poking into her flesh. The doctor made a tragic mistake of unlocking her restraints. When the doctor turned around for an antibiotic, Aleks gathered up her remaining energy to grab the knife. The doctor turned around and came directly in contact with the knife. She fell dead on top of the patient. With a sharp wince, Aleks pulled out the small sharp screw. She then used her bleeding arm to search for the keys off the dead doctor.

Her shaking fingers finally slithered around the keys. She unlocked her other hand and pushed the dead doctor off of her. The restraints on her legs came off next. She grabbed a gauze and a huge bandage that she used to patch up her wounded wrist. An ear piercing alarm sounded around Aleks. Once Aleks realized what was going on, she walked over to the sink. She grabbed a pair of scissors and began to cut off the newly placed stitches. She reached into her stomach and took out the tracker. She hurriedly patched herself up before heading through corridors and winding hallways. A man with a gun came out of nowhere. He started shooting at Aleks while she scrambled to safety.

In her safe area, she noticed the liquid on the counter. It was the same liquid that was cruising through her veins. Before the liquid was placed inside her, she overheard two doctors discussing the liquid. The liquid was to turn her into an indestructible soldier. The guy with the gun suddenly ran out of bullets. While the guy was searching for another magazine clip, Aleks ran out of her hiding spot. She brought up her leg and hit him in his sweet spot. He bent over, and she brought her fist to his face. While he went out cold, She took the gun and the new magazine clip with her.

She ran into a doctor holding a container with an eerie substance. The substance flew into the air as the doctor flew backwards. The liquid landed on half of Aleks’s face. She screamed as the substance fell on her face, tearing apart her beautiful flesh. She grabbed her gun and shot the man as her tried strangling her. He face planted to the side of a fighter who was in deep pain. The fighter pushed on. Somehow she found a way out. She ran past the Masters INC sign until her skinny legs couldn't take it anymore. And after a moment, she kept on going.

She stopped punching her punching bag and walked over to her computer that held an important message. Aleks zoomed into the carvings on the picture of the dead body. “Bklyn Nvl navalibus X”

This was Merci's doing. Merci was the owner of Masters Inc, and she was sending Aleks a message. It read Brooklyn Naval yards at 10.

The fighter quickly got dressed. She picked up her 9mm pistol with an extra magazine clip that she acquired over the year. She put on her black leather jacket, and she headed out. Over the year, she has met dangerous people. She gets new toys from these people in exchange for her killer service. One thing they didn't give her was a new face.

She walked out of the abandoned building she was currently staying in. She got into her new black Cadillac and drove off into the right direction. It was 9:30 at night, and Aleks was almost at the Naval Yards. She knew it was a trap, but this was the only clue she has received in over 4 months.

Aleks parked her sweet ride a block from the desired meeting place. As she locked her car, a chill ran up her spin.

A woman,tall and slim, walked out of the shadows with two men. Aleks walked up to the woman. “Aren’t you worried that the cops have cracked your not-so-secret code, Merci?” She said with emphasis on Merci’s name. Merci laughed.

“Honey, I own the police” The fighter stayed quiet. Suddenly a black bag was draped over her head. She struggled to get out, but the strong arms that held her never lost their grip.
-------
“Welcome back, Aleks. I was afraid you'd passed out on me for good,” Merci said with a smug smile. Her hands and feet tied up, Aleks looked around the undecorated smelly room as she thought about how death was near.

“Now I wish I had passed out for good,” Aleks said with a groan. There was dried blood present on the walls as well as on the table.

“You see Aleks, I’ve been searching for you since the day you escaped. I’ve found out recently that you have dangerous people on your side. Now that's quite a situation you've got yourself into. These people would turn on you in a heartbeat. I sure hope you know what you're doing.” Aleks stared deadly at Merci.

“Would you shut your mouth for once?” She said with a dangerously low voice. A sinister laugh escaped Merci’s lips.

“Or what? You'll stare me to death with your one eye?”

Aleks strained her body against her restraints. “Come closer and find out.” Merci grabbed a surgical knife and stuck it in her old science projects left hand. An ear piercing scream escaped Aleks’s chapped lips.

“Threaten me again, and I'll cut off your tongue” Merci said through gritted teeth.

Aleks tried not to scream any more than she already had. Merci twisted the knife while she screamed, despite her own disapproval. “You should just kill me,”Aleks said through the pain.

“I need you alive, whether with one limb or all,” Merci said. There was a murderous glare in her dark eyes. Its as if she couldn't control her violent behavior.

“Is that what you told the other kids you killed?!”

Merci’s facial expression darkened. “I can't control myself. They were just good test subjects until their bodies failed. Then I had to chop them into pieces.” Merci pulled out the knife once she was done with her sentence. More groans escaped Aleks’s lips.

“You're just like me, Aleks! You have the uncontrollable urge to kill, to avenge! You literally have my blood cruising through your veins.” Aleks laughed through the pain.

“We are nothing alike! You kill innocent people, and you turn unwilling people into killers!”

Merci did the unexpected thing and unlocked the fighters restraints. Aleks slid down the table to the floor. “Get up!” Merci ordered. Aleks didn't move an inch. “I said Get Up!” Merci yelled menacingly. She looked as if her soul became darker this very minute. Aleks obliged.

She grabbed the knife Merci left on the table as she got up. “Kill me,” Merci ordered. A ghost of a smile appeared on her lips. “I want you to feel my power, sister.” Aleks’s heart dropped. “Sister?”

“Yes. Can't you see that we’re related? We are blood, and I hate my blood. That's why I killed our father to take over the company. You are a Masters, Aleks. Aleksandra Masters.”

Aleks gripped the knife tighter as she ran at Merci with the knife. The devil dodged it. “Don't kill me yet. I haven't finished talking.”

“I don't need you to keep talking. I need you dead!” Aleks suddenly felt a shade darker. Merci laughed.

“See? You do have my blood. Once you kill me, you can never go back. You'll become me. You'll become the curse I acquired from our father.” Aleks threw the knife through the air. It impaled itself in the center of Merci’s forehead. Blood spilt out of Merci’s lips. She fell to the floor with her dark eyes open.The broken fighter dropped to the floor. She felt something change inside her. She felt a tightening in her chest; She couldn’t breathe. In that instant, she knew Merci was right. She has become the one thing she has despised: A stone cold viper.