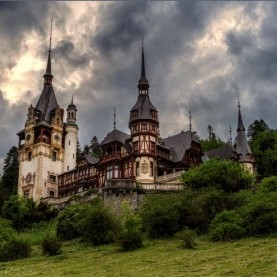 First few chapters of my story Lexington is a girl who's world is about to turn upsidown with magic love and the fight of her life.

I'm Lexington...I’m not an ordinary 18 year old girl. I'm am a Druid. Long story short I’m a wizard who’s powers are kept silent by the non-magical, this is my world
prepare yourself to see it from my eyes. You may think in our world it all pixie dust and magic pumpkins, but ironically its dramatically the opposite. There is only three major rules here… One, don’t perform spells, especially from the Black Book. Two, you can never be in possession of the Black book. Three, the humans can never know what lives among them.
They say if you even so much to try to perform the spell from the book you will use all you powers at once and you will die and if you own a Black book…. Your whole family will be sent to be prosecuted for your ‘crimes' against your kin. Personally I think there just scared, because of all people in this bewitched and forsaken place I of all people have a book. It was passed down for my mother’s, mother and her mother and her aunt well… you get the point? It has been in my family for a long time.
We were brought up to not think that the council was all mighty and sacred. My grandmother once told me that someone someday is going to do it, someone will break the rule. An all hell will break loose, because she believes that if a magical being like us performs the spell if they summon all of their powers and focus… they will succeed and bring them, The Pegasus’s, Unicorns, Mermaids, Centaurs, Fauns, Minotaur’s, Nymphs, fairies,Sirens & all the other magical beings.
They once lived here, until the non-magical people (now the elders and council members) out ruled them, by capturing us Druids, 3 of them to be exact… and forcing them to use all their powers at once, nearly killing them, then they made them make the book, The Black Book. They killed them all of them ;after our of spite and fear, but not before the 3rd wizard passed on a copy of the book to her sister my Great-great-great-great aunt. And there you have it… that’s why we own it; I have a feeling if the other magical beings came back... This place would live again.

Chapter 2
“Lexi!!”
and there he was, my best friend Dorian, he was at the dining table. I was in the living room on the couch napping.
“What? “I said half asleep,
“I really need help with my Bio homework!” He spoke soft but firm. “Come and help me…. Please?”
“Ugg, I guess, but hold on I have to go get dressed!” I told him still in my PJ’s from our sleepover last night. As I went into my room as I entered my domain I thought why is he so needy lately, jeez this is been going on for weeks how much more clingy can he get?
I started to brush my midnight black hair, straightened it then put my bandana in. Put a tiny bit of black eyeliner on my bottom lid of my bright green eyes, making them pop. Put I small smidgen of foundation that concealed my annoying damn freckles. Then I looked a tiny bit better.
I put on my new gray T-shirt that was glow in the dark… It said “Come over to the dark side we have cookies” I giggled, and put my vibrant reddish skinny jeans on, and my family crest necklace pendant that I hold onto with my life if I lost it... I would be toast, dead meat to be precise. I adjusted my septum ring then I ran to the kitchen sliding on our hard wood floors. They were new, bright and shiny. My socks slid perfectly against them.
“Now what exactly do you need help with?” I asked, Still annoyed from him waking me from my delightful slumber.
“The part where I have to do any work at all, Hahaha, just kidding I just don’t get these notes I have to write. How many are we supposed to do?” he said with a grin.
“You woke me up to ask me THAT?!?... “I shouted.
“Maybe, oh what does it matter? I just got bored with you all asleep and me just sitting here being painfully silent because I didn’t want to wake you.” He explained.
“Okay fine, whatever I’m up now. So what do you want to do?” I asked enthusiastically.
“We should go downstairs in to the basement and watch some movies." He said " Okay" I said to my best friend. And that was the beginning of the end.

Chapter 3
Dorian trailed my footsteps down the narrow stairway. When we got to the bottom the lights were off,
“Lexi, where are you? I literally can’t see a thing!” Dorian whispered to the blackness, like something about the darkness scared him enough to hush him up for once.
“I’m by the couch the light switch is to your left!” I said, my voice begging him to turn the lights on.
“Okay got it”… Dorian whispered. “You really don’t need to whisper were the only ones home it’s not like there someone asleep in here…”I firmly told him.
The lights popped on, hurting my sensitive eyes. I watched as Dorian effortlessly jumped on the couch making it squeak. I looked through my stack of my numerous CD’s then I picked the perfect one, “Basement” was what the band was called. I put it on track 5 and it began to play one of my favorite songs called ‘Pine'
“What band is this? They sound really good!” Dorian said.
“Oh its Basement anyways did you want to pick a movie or something?” I squeaked with a monstrous grin on my face.
”Yeah let’s get to it! But not anything to scary” He laughed as the words he spoke slipped out of his mouth.
"Haha your such a goober" I replied.
" Am not!" he said with a scowl. "well at least I'm not a creepy wacko hoarder" he said as he pointed to the abundant shelves of boxes on the wall. " Okay first of all half of that stuff isn't even mine, but you know what how about since it bugs you so much, maybe we could purge some of this shit?"
" Yeah, i think that would defiantly suffice for pay back. Haha you my dear are finally going to get organized." he said with a smirk. Dorian maneuvers his way to the shelves nailed to the chipping paint on the wall showing its true age and fragility.
Something rumbled and the big brown tattered box came down with a thunk, it fell over side ways and then I saw it the leather spine of something only told in myths and said only in hushed breathes... The black book. I fell to the floor..

Chapter 4
“What the heck Lexi? What’s wrong? What happened?? “He said with fright in his voice.
“Oh no... Oh no… this is not happening she said she hid it! “I whimpered angrily to myself.
“Uhhh, are you going to tell me what’s wrong? I’m kind of freaking out here!! And who hid what, what you are talking about Lexi?” Dorian shrieked.
I quickly grabbed the book without him looking a sat on it so he wouldn’t know what I did. As soon as I touched it I felt something… like someone or something was nagging at my soul. It felt wild but not free like it needed something…
“You’ve to go now Dorian I’ll see you at school tomorrow okay?” I told him.
“No way I’m not leaving until you tell me!” he replied. “Leave please I need time to figure this out!” I snapped.
“Fine, be that way, but don’t come crawling back asking for help. Bye…”he said with impatient-ness.
“Bye…” I said somberly.
He exited the room and I heard his footsteps all the way out of the house. I wished I hadn’t freaked out like that... But I needed him out of the way... I’ve never even seen the book till now mom wouldn’t let me. I guess it’s time to check it out. I thought. I picked it up and felt the ruff leather cover, then I saw something… there was a black scene then it turned to color and I saw her my 4th great aunt chained to the floor of the old church the other 2 people looked like wizards and they were quickly scribbling down words that looked similar to the ones in ancient scripture. Then I saw what all the 3 wizards were holding… a black book.
“Don’t even think about escaping” the woman said.
No one replied, too scared to even form an answer in their heads. But one spoke up…
“