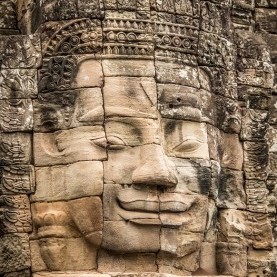 Perception can sometimes be a dangerous thing.


His thin, cracked, subservient, staccato voice grated vexingly on my nerves. I couldn't help it. The pious drivel that spewed from his lips incited the flames of murder within me.

He used religion to latch on to the ones who were not mentally strong, the self doubters of which there were many. I abhorred him.

He was a pale, skinny, bald leech sucking sustenance from the misery of others. In their deluded minds he was meek, helpful, always ready to sit down and listen.

I shared a cell with the man. I sat on the top bunk with no exclusion from the tortures of being forced to listen to his deceitful mummery; and the mewling, mind-less idiots that ran to him to whine their pitiful laments about the unfair assaults on their broken corrupted souls. His ecstasy while wallowing in his power over their diseased deficiencies, made me want to wrap my hands around his skinny neck and choke the sick twisted life from the gelatinous sack of blood and guts that made up this man.

Despicibilty smoldered, and became loathing. Loathing crackled and burst into hatred, rising, consuming me! The sound of his voice became a rasp on my raw sensibilities.

On the surface I was polite, deferred. I mean regardless I still had to live in the confines of an eight by ten foot cell with him. This was a sentence on top of a sentence. Cruel and unusual punishment in it's harshest form, to my intellect's careful reasoning.

His vapid pupils became innocuous of my frowning existence over their blathering heads. A seed in the back of my mind germinated. A niggling little thought but tantalizing in it's very wrongness. I would kill him.

The seed became a small plant. I began to plough, and turn the idea over in my fertile mind. I pondered all available methods. I would need a formula that insured both success, and anonymity.

I racked my flayed brain, reliving act after act, trying to determine the proper course of action for my heinous task. My obsession ate up the hours in the night. This went on for weeks.

It began to creep over the hours in the day as well. Soon, the obsession took over my my life. Every waking moment was devoted to this assignment. I dare say my dreams were as well. I became feverish in the speed and intensity of my thoughts.

Previous acquaintances dropped away and I scarcely noticed, in my attempts at resolving this dilemma. My hatred knew no bounds. The question of my soul's salvation never became an issue.

I immediately and gladly forfeited it in a trade for a solution. I willingly gave up two meals to allow more time to work on it. Taking only the one, just to keep myself going.

I plotted. I acted out replicas while in the limited privacy of the shower. I began to lose weight.

I looked in the mirror to shave and I scarcely recognized the gaunt fever-eyed person looking back. Time, like water, kept flowing onward. My teeth became loose in my head. I would pick one and wiggle it as I lay awake, most times until dawn.

My once sharp mind began to dull. I caught myself repeating things over and over. Things that once were simple became almost overwhelming. Vexed, I scolded my brain, reviling it for it's unforgivable errors. Reality began to blur. My sanity slipping from my iron grasp.

I lay shaking and sweating in the tepid night air, scenarios playing and re-playing across the back of my eye lids. The thought struck me out of nowhere, like an arrow finding it's mark! The simplicity of it took my breath.

I was astounded that I had not realized it before! I rubbed my parched lips and laughed out loud. I closed my eyes and slept. Time no longer pressed it's un-fathomable weight upon me. I had the solution.

Damnation was certain, but I shouldered it willingly, and with relish. The answer was mine. I awoke refreshed and smiling.

I chose a date two weeks hence to accomplish my goal. I allowed myself the luxury of meals again. I would need my strength. Even the experience of sitting through the old man's vampire-like sucking of other's self esteem, became bearable. I sat through it smiling. I had my solution.

The days and night began to fly by. Time seemed to accomplish warp speed until the day of reckoning arrived. The deed was planned for the night-time, after the final count so that there would brook no interference.

The day arrived and buzzed by. As night approached, I prepared myself. I steeled myself by looking out the window and talking to myself to spur me on.

The moon was full and opulent. How fitting! A tribute to my triumph!

At last the time came. For a few moments I reflected. I thought it all through again, to be absolutely certain."I am sure." I told myself. I was committed.

The diamond of an idea that had alleviated the tortuous condition of my mind was astounding in it's simplicity, just choke the old bastard to death and be done with it! "Damn culpability!"

I laughed softly. Climbing down from my rack as if to relieve my kidneys, I stood watching the sleeping fool in the bottom bunk. I crept forward silently in the dappled moonlight. I dropped the folded blanket I carried on the concrete floor beside his bunk. I knelt down and inhaled deeply.

My hands jumped forward with a mind of their own. The feel of his mole-spotted, wrinkled skin nauseated me almost to point of vomiting as I slid my fingers behind his bald head, and locked them together. My two thumbs dug into his saggy Adam's apple as I applied the measure of my strength. His eyes flew open.

Too late he realized the danger he was in, his feeble fingers clawing at my wrists to break my hold. But I was on him like a pit bull's jaws. There was no escape.

He bucked and kicked. His heels beat a rhythm on the thin mattress he was dying on. His bowels released. The stench of his petrified stomach contents spoiled the spring-time air. He ceased all movement, save the flickering of his eyelids.


The light of evil intelligence faded from his eyes. I sweated in silence, the moon's glowing countenance bearing full witness to the somber event. I held him like that until his flesh became cool and his blank staring eyes began to glaze over.


Time lost it's meaning for me. I was curiously blank, devoid of thought or emotion. The finality of my action sank in, I began to smile. It was done. For better or worse...it was done.

I released him, or should I say, his emaciated corpse. I got up, shook my blanket, and placed it back on my rack. I opened the window to alleviate the stink of him. It had become overpowering.

I washed my face and dried it, staring into the eyes of my reflection, trying to recognize who I saw there. Finally I climbed back into my bunk. I shut my eyes to get what sleep I could before the day officer discovered the body in the morning.

They threw me in the 'hole'. I sat there, waiting to go to a maximum security prison. Two days after the event, as I lay on the concrete slab that serves as a bed in solitary confinement, four guards came in. They chained me to the point I couldn't even scratch my nose, and left.

Later, the warden came in, holding several official looking papers. He looked at me as one would regard a wounded animal that has to be put down.

"Why did you kill him?" He asked. No preliminaries or beating around the bush.

"Because I hated him!" I spat hatefully, venom enriching the words describing my base emotion.

The warren looked at me for a long minute, disgust spreading across his ample florid face. He said nothing more, but held up a letter before my face.


I read, "Respected Parole Board Members,
I am thrilled to get the response back from you so soon regarding my room mate, and my previous letters in his behalf. Thank you so much for obtaining his pardon from the Governor. I am sure he will be surprised and delighted as am I.
Thank you so much!"


My eyes had blurred to the point that I could no longer see the page. But I had recognized the sprawling handwriting of my now departed bunkmate. Tears spilled down my cheeks in rivulets.

The warden held up the pardon with the Governor's signature. Silently he tore it into shreds, dropped them on the floor, and walked out.

They gave me life, no possibility of parole. I stare at my new cell mate and a familiar feeling arises.

That was incredibly well written, for the most part, only occasionally slipping into 'satisfactory'. There are only two critiques I could fairly give. One being, as you are very clearly a person of a large vocabulary, sometimes it is more impressive to use less words, each being more precise, rather than a string of 4 or 5 adjectives. Two being, I felt the pace was a bit to fast in places, and at times the plot felt like it was being forced forward. This is very reminiscent of old horror writers, but not something I personally enjoy. Lastly, if it were me, the only line I would specifically change is '"Because I hated him!" I spat hatefully.'

I was hooked from the beginning. Extremely tight and well-constructed plot, I must say. It is not an easy task to delve into the deepest darkest corner of the human mind and allow the reader to sit in the protagonist's shoes, seeing the world as he would see it, but you have done it with perfection. Kudos to you.
Tweets by @thepenfactor