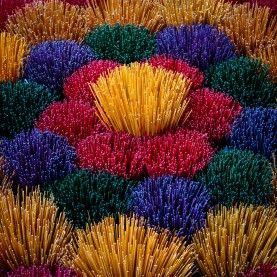 A young man comes to terms with what it is actually like to be black and in love with a white boy.

He always bit his lips. I don’t know why I remember this, but I do.

Maybe it was the bloom. He himself was barren, colorless; his hair could be tumbleweeds, a tangle of pale brown. His skin cut a sharp line between him and me, in which I bled black and he bled white. Only he wasn’t white, he was translucent, blue and purple veins ever present beneath the skin. His eyes too, swallowed everything whole, with a careful patience. Everything he did was delicate and covered in dust-but not necessarily the kind you wipe off. It shimmered bronze, beautiful.

But when he bit his lips, he bit them so harshly, angrily, unlike him. In class, he would bite them. In the hallway, when the inevitable scream “FAG!” Chased him with sharpened talons to sink into his ankle and drag him down, he merely bit his lip and carried on, his head held high on his thin neck when he walked to meet his boyfriend. I bet he bites his lips when he wakes up with him too, sliding a tee shirt on over his head, and pausing before putting on a sweater on as well, to hide the bruises on his arms. I bet they bloom bright too.

I’d lie awake in my apartment, looking at the ceiling and biting my own lips, wishing that they were his instead. I’d watch that bare wood until it blurred, the brown melting into the white of the walls. I’d bite my lips until they bloomed too, bright red I had to rinse off in the sink. When I looked at my own reflection, I saw a shadow of the boy, and I would weep for the injustice of it. I didn’t long to just be his trace.

The first time I saw his lips bloom red, I fell a little more.

He sat on the sidewalk, a bag beside him, filled with everything and the kitchen sink. It overflowed with objects, the soft lumps of clothes and the hard outlines of books jutting out the side. He took a long drag from his cigarette, his eyes closed in bliss as if he instead drank water after a long run. He exhaled a cloud of pale smoke, translucent like his skin. Holding the cigarette loosely between two delicate fingers, he bit his lips, so hard that when he went to take another drag his soft lips bloomed red.

I swallowed, summoning my nerve, and walked up to him. “Hey.”

His thin neck twisted to look at me, slowly, carefully. Dark circles under his eyes and a dark blossom on his cheek made him look even thinner, more fragile.

“Got a light?” I pulled a pack out of my pocket and slid one from the container.

Noiselessly, he pulled out a small, chipping-paint lighter and flicked it, producing a tiny orange flame.

I sat beside him, leaning toward the flame to light the cigarette. Once it was done, I took a drag and exhaled, watching the smoke curl up toward the sky. “Thanks.”

We sat in silence for a while, alternating taking drags. Finally, I swallowed and looked at him. “You got a place to stay?”

He shook his head.

He shook his head again. He took a drag from his cigarette again and exhaled, watching the smoke. He still looked at it when he said in a quiet voice: “I don’t need charity.”

“I don’t even know your name.”

I bristled, although it was true. “Fine. Marcus.”

I rolled my eyes. “Fine kid, do what you want.” I felt my heart caving in, collapsing into a million pieces.

That was the first time I’d ever seen him smile. It was so odd, in his pale, wan face that seemed to have the perfect model pout all of the time. No, his smile…

“You’re not a stranger though. I’ve seen you at the college.”

I fought from blushing. “Really?”

“Yeah. You’re in Psych with Reddinger, aren’t you?”

“Cool.” he took another drag from his cigarette.

I paused to think of what to say next as he exhaled. “Is that your major?”

He raised an eyebrow at me. “What? Didn’t peg me as the doing-theoretical-equations-in-their-spare-time type?”

I hadn’t pegged him as anything, except for a lonely, quiet soul. And even that was being challenged. His voice was still quiet, his face still with little expression, but his voice carried a rich, deep passion that I drank in like a sweet red wine. I wanted more.

I laughed, taking a drag from my cigarette again before stubbing it out. “Same.”

“Not really social?” He took one more drag from his cigarette before stubbing it out with his sneaker.

“Nobody at school I really wanna talk to. And I live in a predominantly white neighborhood. So they don’t wanna talk to me.”

He raised an eyebrow and sighed, clasping his hands in his lap. “I hope I didn’t come off like that, when I didn’t want to talk to you.”

“No need to give me the ‘I swear I’m not racist’ spiel. Doesn’t really matter to me.”

He nodded his head slowly and looked down at his hands. “Good philosophy to have,” he said quietly, quieter than ever.

We sat in silence for a while, but it was a comfortable silence. Whatever problem we had dissolved into the air, like mist. Like smoke.

I cleared my throat and stood, hitching my backpack up on my shoulder. “I’ll leave you be. Nice to meet you, Ainsley.”

“You too, Marcus,” Ainsley said softly, looking back toward the road.

I swallowed and turned, starting to walk away when I heard him cry out: “Wait!”

My head whipped around and there he stood, a pen in his delicate hands, scribbling something down on a piece of paper. He held it up to me, turning his face away as if he didn’t want me to see his expression.

“My phone number. In case.”

I took it, my heart fluttering in my chest. As an afterthought, I swung my backpack to my front so I could yank out a piece of paper and pen myself. I scratched down my street name and building humber and held it out to him. He turned to me fully then, and I could see what he hadn’t wanted me to-a faint blush.

“Address and phone. In case.”

He swallowed, the first sign of nervousness I had ever seen out of him, and took it. “Thanks.”

“No problem. I’ll see you around.”

We turned and walked different directions, with different hearts beating in different chests. But it was beating; no longer did I trail behind him desperately, longingly.
And that would satiate me for now.