Paradigm Shift - Can I Heal? Chapter 2 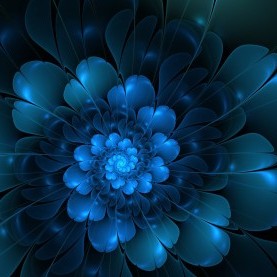 Paradigm Shift - Can I Heal? Chapter 2

Paradigm Shift Chapter 2 –Not Where I Should Be
An ascending memory of sweet bellflower and rum, stirred me. Desiring the sweet aroma again, I took a deep breath, only to be quickly escalated to consciousness. Disoriented and feeling fractured, I realized I was falling, tumbling in a blur of purple and white light, with a dim and far away light as my apparent destination. I couldn’t feel my body. My heart seemed to be speeding ahead of me, like I was an unwilling owner, whose leash was being pulled by an exceptionally large dog. Finally, I stabilized a bit, and became aware that I had stopped screaming.

Taking a moment at a time, I tried to problem solve my way out of this. I looked down. From up here, I could see a beautiful array of sparkling spiral shapes, swirling and moving in and out; appearing to spiral downward. It was like looking down from the top of a spiraling staircase made of millions of other spiraling staircases, all matching, shimmering in gold and sparkling with diamond crystals. As I fell inward, further passing staircase after staircase, I came to my staircase.

The diamond crystals, now closer, became clear. They were stars in a dance of moving in and out. All the stars formed cubes of stars, each with a moving section that seemed to expand the cube beyond its three dimensional shape. When the cube of stars was fully stretched out, by this fourth moving piece, they appeared diamond shaped. This motion of cube to diamond shape made the stars appear to twinkle. There was a pattern to the twinkle. The stars did not move in complete unison, which made them even more magical; millions of tiny diamond-cubes floating in space, all connected and waving like a sheet waves when you snap it up and then down; there is that moment, if frozen, you would see all the waves and bumps’ flowing before it flattens out onto the bed. As I witnessed this beauty, ahead of me lay this brilliant sheet of light and connection caught in that frozen moment of un-wrinkling. I startled, hearing my grandfather’s voice.

“Fractal geometry is using math to make sense of chaos; it is the geometry of the mountains, clouds and galaxies maybe even the fabric of the universe,” I remembered and heard again his voice saying this to me as a young child, just before his death.

A golden colored diamond shape appeared to be my destination. I could see it as one of the repeating pieces of the big cloth. The closer I got, the more detailed it became. Intricate patterns changed and danced. It was like landing in an airplane. The swirls became, farm like squares and the once ant like structures, gradually became massive. Only the pattern remained the same, repeating, and yet looking completely original. The multi-hued brown of the surface, and its fractal structure was different than the other repeating patterns; as this particular repeating fractal structure had a jagged crack right across the middle. It wasn’t moving and appeared broken.

A memory of Mrs. Robinson’s Math for Science Geeks class I took during the summer after my sophomore year; because mom thought it would make my college application look good, came to mind.

My heart slowed and skipped a beat for a long moment, at the thought of mom, at the front door. What was going on? Am I dying? I feel different. I concentrated hard on home, and my falling speed slowed; but my heart tugged, and I followed it ever closer toward the diamond sheet. If this is what passing out is like, I’m never drinking again…probably. The fractured fractal floor was near. I fell closer. I realized I was going to smack into a hard Plexiglass-like surface.

I turned my head. Afraid of the impact, I screamed. Just then, I saw a flicker of a hand. My speed slowed tremendously. Had the hand caught me? I still could not see my body, but I was beginning to feel it. Abruptly, my feet hit the floor. It was like jumping off a swing, at its highest point, and landing hard. I crumpled into a pile; caught from my free fall, by this sheet of connected diamonds; by this cracked piece of star, hardened and still.

“Sam,” she resumed, “fractals are simply geometrical shapes added infinitely to a geometrical shape. This creates symmetry. Think of a snowflake. All snowflakes are unique, yet all have repeating patterns. These patterns, could theoretically, be stretched out infinitely. Fractals exist in nature, and are common in the world of computers, and in the understanding of the galaxies, and the universe. Practically speaking, natural fractals, like coastlines, can be measured using fractal math, and there is even such a thing as a fractal dimension, which is somewhere between the third and fourth dimension.” I felt confused, my head and spirit spiraling, pulling. I gave in and blacked out.

“NO, it’s mine. I saw it fall first,” a second angry voice shook at my leg.

The one pulling my arm, and the other yanking my leg looked indistinguishable to me. They were both big oaf-like creatures, Neanderthal-looking, with sharp chiseled jaws, shoulders, and calves. They had the build of a middle-line man, but no roundness; only hard edges. Instead of skin, they had a rock-like appearance. Their faces appeared small and uneven, with narrow foreheads. The cracks in the rock skin, revealed a molten glowing interior. Their arms were disproportionally longer than their legs. Yet, their strength was surprisingly gentle for their size. Except for their large size, rock like skin, and lack of symmetry; these beings appeared human; but they were definitely not human beings.

“Let go of me,” I screamed. “You’re hurting me. Put me down you assholes,” I repeated as they looked at me strangely, not pulling, but still holding on, suspending me like a doll between two toddlers.

“Let her go,” demanded a voice running toward us. “Put her down.”

This voice felt familiar, softer, but firm. He was different from the other two, human-like. He had a rounder, softer look, more symmetrical. He looked at me and a smile briefly brushed his face. His deep dark eyes starred just a little too long into mine. A bit of memory blended with the current moment, a Déjà moment? How?

“It’s mine,” said the foot holder.

“I saw it first,” said the arm holder.

“It’s not an it. It - is a being, and beings cannot be owned. She is free like us. Put her down,” said the round guy with the eyes. The block people dropped me and mumbled their way back from where they came.

“You’re here,” he whispered, as if in shock, as I slowly sat up.

I found myself starring at him. Something confounded me, but I couldn’t place it.

He looked at his feet, and then quickly, stumbled out the words, “I mean, you’re hurt. You’re back looks hurt,” he said.

He took my hand and pulled me up, then lifted his hand above my head. I turned under our hands, so he could inspect my back. I felt a current run between us; unexplainable electricity, palpable. A feeling I had never experienced before today. Did he feel it too? He looked closely at my back and shoulders; then turned me back toward him, smiling.

“Good,” I said. “I was worried about that earlier. Where am I? I think I’m really lost.”

“Wait, what’s your name? Where do I go? What do I do? How do I get back home?” I rambled, shouting the fear I felt.

“They call me Leader, but you call me David,” he said. “You are free to go where ever you’d like and do as you please. You are as free as me. As far as home, please make my home your home,” he said and then gave me a smile that was filled with knowing. This made him even more mysterious to me. I thought how odd he made that statement sound; make my home your home. I looked around at the strangeness of this new place. It sure isn’t home. This isn’t where I’m supposed to be; but somehow, it feels right.

“David,” I said. “Am I dead? Is this purgatory, heaven, hell?” my voice rising as he continued to walk away. He didn’t answer; he never even looked back.

Your work looks interesting, and well written. I am not a very good expert or what they call a grammar Nazi, but almost the whole chapter was flawless. Kudos to that, the pacing looks well and the narration and dialogue are well balanced. Keep on writing.

This chapter was interesting and I would love to read the one that came before it. It started out a bit confusing but by the end I kind of figured it out. Great chapter and I would love to see the story in its entirety one day.
Tweets by @thepenfactor