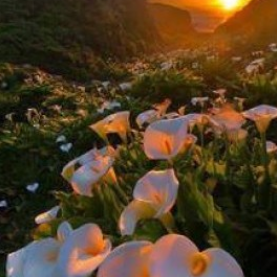 After longing for her own life and having her spirit torn (part of her in her world, part in this new world), Sam finds herself in a new fractal world. She meets David, the leader, in chapter 2, after he rescues her from rock-like people (Edgers). Chapter 2 ends with him walking away after meeting her, leaving her alone in the new world. In chapter 3, their relationship deepens as does the mystery of how he knows her. Also, chapter 3 further describes the new world.

“That bastard,” I said under my breath, “He left me here, alone.”

I looked up, to see if the hole I’d fallen from was still there. The beauty of the shimmering caused by the shifting of the cubes back and forth and up and down, moving in and out from cubes to diamonds to lines, wrinkling and un-wrinkling caught me off guard. Had I fallen through them, or had they closed in around me? I had no way back, only forward. Whatever happened at the bellflower had pushed me over an edge, from which I couldn’t return; at least, not the way I got here. Not knowing what to do, I walked in the direction he was last heading. Standing here isn’t getting me anywhere. Moving forward was my only option. All I knew for certain, is this guy, David, was my only hope. He was the closest thing I had to understanding where I was, and what was happening, and he had gone in this direction.

After a mile or so, in the distance and to my left, the land changed and began looking like a forest near my home. A bittersweet twinge met my spirit, seeing this reminder of home. The familiar aesthetic sense of the bellflower and trees mixing with the tall grasses filled me with gratitude. The grasses swayed in the wind. Oddly, I felt no breeze. To my right, I could see forever. Vast areas of warm color; but surreal, unfamiliar and incongruent to all I knew. The ground was hard and clear. I could see increasingly subservient triangular shapes, infinitely circling inward and downward just below my feet. Surveying the vastness of this unyielding desert; my pace quickened toward the forest.

My steps echoed. Perhaps, I could hear his footsteps. I listened. No sound. Since I couldn’t see him in the distance, and I couldn’t hear him; he must have gone into the wooded area. I turned left trying to enter the forest. Instead, the wooded area resisted me, and the trees appeared to ripple, as if I had dropped a pebble into a calm pond. That’s when I noticed the unnatural straight line from where I stood to as far as I could see. The forest just bluntly ended, as if someone drew a line; a precise line severed it from the flat land. There was even a tree cut vertically in half, and many large trees with branches on one side of a tree, but not the other. I turned to go into the forest again. Again, I couldn’t get through the gelatin-like curtain that simply waved.

It wasn’t letting me in. I turned and kept walking. Ahead, a silhouette, I recognized as David. He had his hands on his hips, looking back at me. As I got closer, he appeared strong, assured, and had a cocky smile. It made me boil with anger. My hands clenched, my stride grew wide and powerful, I leaned toward him, my face hot and tight.

“You bastard, how dare you leave me alone to fend for myself. You know I’m lost; and you leave me? What kind of …” and then I stopped. I was going to say man, but was he? He just stood there frozen in that stupid half-smile. I wiped my hands over my face to cool it.

“Scared,” he completed my sentence. I was going to say angry, but he had cut to the point. I was angry, because I was scared.

“You have every right to be. It’s just I knew you were safe and strong enough to be on your own; but half way back, it occurred to me, that maybe, you didn’t know, you were safe. So, I came back to check on you. Is that alright?”

“Yes,” I said, feeling ensnared by him.

“It’s late. I want to show you around the community; but I don’t want to alarm them this time of night. Let’s find a place for you to sleep. I will come for you in the morning. Okay?” he asked.

“Yes,” I said, feeling awkward at the repetitiveness of my yeses. I returned a half smile, shook my head, and rolled my eyes, at my lack of composure; and the unease I was feeling being so near him.

He stifled a laugh and looked down momentarily. Then he looked at me, as if he had done so millions of times. I felt connected… but I couldn’t be.

“This way,” he said softly. And I followed.

We walked in uncomfortable silence and seemed to be going uphill. Shortly and without warning, we were on the edge of a cliff. To the left, I could see down into a beautiful lush valley of white calla lilies; the forest framing them to the east and majestic blue rock formations ahead; separated just enough to see the rising lavender moon. The Calla Lily with their white, coned-shaped flower, curled at the tip, had shadows in shades of blue; the yellow stamen darting out; turned as if gazing at the extraordinarily large, pale-indigo moon. The moon was illuminated both from reflection of the setting sun, and from its’ core, which pulsed a dark purple radiant glow, a gentle, slow, hypnotic pulse of penetrating purple light. The Calla Lilies so thick, it seemed impossible anyone could walk through them; yet it was all I wanted to do. The lilies ran in thick clumps for as far as I could see, crowding themselves between two massive rock formations. The rocks, jagged and graduated, were flat on top. These rock masses, mirrored images of one another, seemed to want to embrace, but were held back. The waterfall behind the rock formations, with fast-flowing, clear-water, revealed a darker rock, behind the power of the falls.

Any one aspect was beautiful, but taken in its whole, the view was stunning and my breath was momentarily, taken away. I was still puzzled at seeing a breeze, but not feeling one or smelling anything other than his musky scent. I could see the power of the waterfall, its persistence; but I could barely hear the rumbling rush it should have had. It must have been muffled by its distance. The waterfall stretched around from the east to the west like a backdrop. It fell off, slowly growing smaller, eventually giving in to the hard nothingness from where we came. It seemed here only to please us; and it did.

The power of the falls, the serenity of the valley, it captured us, and we stood there together taking in the beauty, lost in the nature, lost in the moment, lost in the intensity between us.

A thought crossed my mind and slipped from lips, “Perhaps, being lost isn’t such a bad thing.”

I took a step forward to see down into the area to my right. He grabbed me around my waist.

“Careful, there’s an edge,” he said, quietly pulling me back and releasing me. Putting his hands in his pockets and kicking the toe of his hiking boot on the stone in front of him, he looked over at me.

“Edges are to be respected. Once you get to an edge; back is all you have, forward leads you someplace you might regret getting to.”

Summoning a little courage, for the first time since I arrived here, I said, “Boundaries create safety, but limits cease growth. Growth is so much more important than boundaries, don’t you think?”

“So, I will be safe here, until you come back tomorrow and help me learn more; help me grow in my knowledge of this new place?” I said slowly, with more in my thoughts than my words said.

“Yes,” he repeated with a thought behind his dark eyes.

“It’s late,” I said with a half smile. He pointed, and I turned to see a tent, just in the darkness behind us. Perhaps he put the tent up, and then came back for me, although by the dust and discoloration of the green tent fabric, it looked like it had been there awhile.

“Thank you, I’ll manage from here. I appreciate the fire ring.” He looked down, tapped the nearby rock with his toe. We both let out a small chuckle, simultaneously remembering our earlier awkward conversation, also filled with yeses.

“Yes,” he said reluctantly with a shake of his head and a telling smirk on his face.

I couldn’t help but smile a sensual smile. He turned and walked down an edge to the right, which led to the flat land below.

“Good night, David,” I called back watching him, until he disappeared into the darkness.

A note was pinned to the door of the tent. It read:
Sam,
You can rely on me.
David

Later, as I hit flint against stone, creating a spark for a fire, it occurred to me….Did I ever tell him my name?

I honestly wish I had read the first two chapters! I'd definitely buy this book! My only problem is the word you use, "yeses" because that word just bothers me in particular, it's a weird thing with spelling and I. But other than that, amazing!

"The beauty of the shimmering caused by the shifting of the cubes back and forth and up and down, moving in and out from cubes to diamonds to lines, wrinkling and un-wrinkling caught me off guard" is a bit long for an early sentence. Your dialogue was good and informative. You didn't give too much away early on - that's a compliment.

Perhaps you could avoid using adverbs to describe speech?
Tweets by @thepenfactor