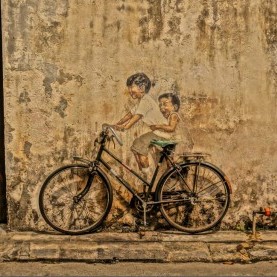 How would you cope if you lost the one person you swore would never leave your side?

Words are just letters matched together to create meaning. Stories are just words mixed together to tell a tale. But this is no ordinary tale. This is his tale, the truest and purest tale ever told.
She sits down on her worn bed spread and stares into oblivion. It's been two years, and whoever said that time heals the pain, never suffered a heartache this wounding. She somehow musters the energy to saunter across her room towards the carefully distressed bookshelf. She chooses not a novel of Steinback or Austen, but a novel from an author much less relevant to the remainder of the world. She plops down onto the floor and opens not a bounded or neatly typed paperback, but flips through the pages of the scribbled and now somewhat aged, never published manuscript. She skips through the first two chapters, knowing them all too well. She starts with chapter three entitled, "First Day of School" that is now smudged to a point of unrecognition. Her eyes danced over the opening line, "He was dressed in his khaki shorts, white v-neck, and little pink and yellow plaid suspenders wearing a smile so wide across his face that it lit up the entire morning sky." This line brings immediate tears to her eyes each moment she mouths its content. She can see it, she can picture it all so clearly as if it wasn't just a dream, as if it had actually occurred. But it hadn't. It was a fabrication of her imagination that had become so real to her she knew of nothing else.

She turns to her favorite chapter, Chapter 10, "Graduation". She rereads the hand printed lines as she had a hundred times before. "He strutted across the stage as if he had won the basketball state championship all over again. His head was lifted high and his shoulders were strained back. He looked as confident as the clouds delivering a nightly rain. The quiet smile on his face shone through the atmosphere into the heavens that breathed above him." She stops at this line and takes a series of deep breaths, something that is now a common routine for her. It isn't every day that simple words can make a person's heart stop beating entirely. Tears irrupt at the sight of the next chapter. "Wedding Day". What should be the happiest moment of his life is the hardest for her to declaim. She has never been able to fully read this chapter, for fear of taking his own memory away from him. She closes her eyes as she recites the words on the page as if they were her own, "He was waiting for her, tenderly, with a glisten in his eyes as if he was about to conquer the world. The audience stands and faces the back of the room as a woman dressed from head to toe in white waltzes towards him. They recite passionate words back and forth to each other, words describing the years and years of love and friendship they have shared together. They recite 'I do' and seal their existence with a kiss as the once two separate souls merge into a single spirit. He had done it. The world, his entire living breathing world, was now completely his. The utter joy he felt, the pure happiness he witnessed, was a feeling he would never again perceive even in the greatest of days in his future."

"In his future…" she muttered to herself.

What is one's future? Is it the idea we store up in our minds to fill the void of our empty present? Is it the goals and aspirations of a tomorrow because we can't seem to get anything done today? Is it the fear of our forever, of living with the choices that were all too hard to make? What was his future? What were his dreams? She could only write it to her own ability. She could only use what information he had left behind to give him what she believed he would one day want. But what did his innocent heart truly want? Did he want to love? Did he want to survive? If he had survived…

She threw the miscellaneous pages on the ground as she paced her quaint room. She exited her door and ran through the hallway to the place she swore she'd never find herself falling. She slowly creaked open the door to the pale blue sanctuary where he had once laid still. She walked to his closet and ran her fingers through the hand-me-downs he would never grow into. She sat on the bed he had slept endless nights in, and imagined him here sitting with her still. What would he of looked like at six years old? At sixteen?

These questions haunted her every being, and she knew she could never truly escape them. Time would never be able to heal the missing piece inside of her. No one person could ever fill the void in her heart that ached for his presence. Every time she closed her eyes she saw his face. His gentle, kind, pale face still instilled in her every thought. When would this emptiness end? When would she be able to forgive herself?

She rose and walked back to her own room, curious if he would be doing the same if the roles had been reversed. How she prayed the roles would of been reversed. She gathered the scattered pages from the floor and put them back in order as she had once written them. She searched for the cover page and the letter that followed it. She spotted the missing pieces as she picked up the letter and read it for the hundredth time.

Since you asked, no. No, I will not forgive you for wetting your bed and making me be the one who had to clean it up. No, I will not sing you your favorite song to sleep anymore, you and I both know how tone deaf I am. No, I will not lie to Mom and Dad. You broke your lamp because you wanted to play baseball in your room, you should own up to that. And no, no I will not forgive you for leaving me. We were a team, you and I. A team that never once faced the fear of the unknown. We were invincible, immortal. I needed you and you weren't there. I needed your strength and your innocence and you just left. Why did you have to leave me? You were supposed to grow up. You were supposed to fall in love. You were supposed to live through all of life's ups and downs, and I was supposed to be there to save you from it all. I was supposed to save you. And I couldn't. I wish it had been me. I wish it would've been me lying in that hospital bed for months on end instead of you. I couldn't do it. I couldn't watch you lose yourself. I couldn't watch the fire in your heart extinguish. I wish our hearts were connected somehow, so when yours stopped beating mine would've too. I used to be angry, but I'm not anymore. I only wanted you to grow up and live your life the way everyone should be able to, but you weren't given that opportunity. I hope that this future I have written you is everything you hoped it would be. I hope I have given you a new life, a new world, one filled with all the things you long for. I only ask you live this life just as passionately as the life you lived here with me. You were my best five years Willy, now go live the rest of these years I have given to you. I used to think we were invincible, and now we can be. Words used to be just letters to me, and stories just used to be words thrown together. I know this now to be false. Words give a story life. My words, give you life. As once spoken in the words of our favorite author,

"So long as men can breathe, or eyes can see, so long lives this, and this gives life to thee."

I appreciate the beginning of the story. It made me to think wisely and it inspired me to write again.
Tweets by @thepenfactor