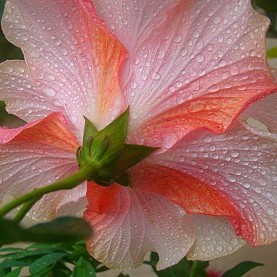 Working girl discovers something in common with client.

She glanced at a tinkling drain and briefly along the blue glistening gutter as she walked towards the blue silhouettes of the other girls. The reason for the blue was a combination of blue vacancy light on the motel down the street and electrified beer sign on the pub, a bit in the other direction - a slice of wayward artery off the main drag. She mused; some would say they were ideally placed in the middle of this blue haze between alcohol and dreamless oblivion. Only cars passing beaming and streaming white and red broke up the blue atmosphere pervading everything.
Even Jema and Sandra’s skin looked blue-bruised all over. Jema, half Maori, abused in a school in NZ, ran away when she was thirteen and came to Oz, and depending if she had a regular man, had been on and off the streets ever since. Sandra wasn't regular man - but worked out in the gym until the muscles bulged under the gold lameˊ mini skirt and fishnets she liked to wear.
The two of them towered over her like giants. Always thin and small, and despite her twenty four years; to all appearances still an undeveloped girl. In spite of herself, she knew this was the attraction - her worth. She hooked up with her two old friends about six weeks ago and they gave her the reassurance of some protection on the street. They had a reasonable connection and a room, and she felt safer than she had for a long while.
He picked her; she wouldn’t have picked him, which might have been unexpected, perhaps not. From the darkness of his car he beckoned them over, and politely dismissed her friends. After agreeing to her price, she got in the car, and directed him down a block to the motel.
Only later in the room, when the white light sparkling off an ornate gold crucifix; a twisted miniature of Jesus’ body, like the Pope’s, hanging loosely between his clavicles, did she think – have I seen shoes like his before, black trousers like his before? She put her bag down next to the bed. Despite all that had happened since she began on this road; no matter how many times beaten, no matter how high and numb, no matter how mundane, boring or sleazy things became, she promised herself always to be prepared. As she removed her clothes, she looked at him, and away as necessity required. He was an older man with slumped, narrow shoulders over a fat belly, and with each glance she mentally tried to rebuild the departing grey hairline.
“How old are you?”
“Eighteen,” she lied in her little girl voice.
“You’re so sweet - you look younger.”
Naked except for her panties, playfully she jumped up behind him on the bed and helped him off with his white shirt. She inhaled a familiar smell of starch.
“You have a scar here.” She traced a circle with her fingernail in the middle of his back. “Like the sign of a secret organization.”
He snorted, enjoying her youthful imagination, “I had a cancerous mole removed.”
She continued down the rough country of his back, when not with her touch, her eye. Along his spine were small clumps of hair, sometimes surrounding the endless freckles or moles of various sizes, patches of skin like dried salt lakes, and other skin deformities. She ran her hand around his loin and he lay back as her fingers came to rest on a purple ripple descending beyond the waistband of his pristine white shorts.
“Appendix,” he told her without asking. Also without asking his penis rose through the aperture in his shorts. Following the script, her hand began to caress the shaft, when she saw the long twisted scar and everything fell into place. She looked at him, but not as before. “Botched circumcision.” But he didn’t have to tell her. Already she had subtracted the years from his face.
“You don’t have any scars little one. Your skin is perfect,” he told her, running a hand over her breasts and shoulder.
She smiled, while the knowing fingers of her left hand crept slowly up his chest, rib over rib, titillating him beyond belief. She leant close across his body, her breasts grazing his chest, and stretched down off the side of the bed with her right hand into her bag.
“Some scars you can not see,” she teased, her hot, moist breath exploding in his ear, as she sat up straddling him.
Her expert fingers stopped in the valley between the fourth and fifth rib, and though distracted, she knew he felt the point of the knife the instant before she plunged it deep, both hands pressed on the hilt, into his heart. His body bucked beneath her and hot blood gushed onto her hands and splattered her arms. Seeing him looking up at her with no expression except surprise, she adjusted her grip on the sticky haft of the hunting knife and twisted hard until she felt the blade open the ribs and slice the intercostal along the bone. He screamed so loud she saw deep down his throat and twisted again as he brought up his failing arms to grab her. Blood bubbled like lava through her fingers and around the knife buried in his chest.
“Some wounds,” she completed her private litany, “never heal.”

Excellent use of wide vocabulary and vetbage, Gsve me an instant visual of the setting and circumstances.
Tweets by @thepenfactor