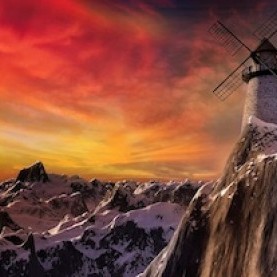 Many things are mysterious in life, things that people either don't think about or simply accept: a top down trickle of universal acceptance of knowledge.

He has to read the same line again. & again.
He’s doing it, rereading again, that same line, now. Once he reads it, it refuses to stay put; It disintegrates like a sand statue, a sudden wind. It enters & exits with the same speed. Different forces. There is a grinding, his molars on top scrape his molars on bottom, back & forth. Muscles in the jaw flex & unflex, a face’s popping pulse.

The woman next to him, across the artery-like isle, she’s wearing a blue dress, fills the seat. She’s talking to her young son, who sits behind her, back & diagonally from the man who is trying to read but is succeeding only in failing to comprehend that single line, again.

The woman is verbally guiding her son how to navigate the many choices present on the screen that each seat has embedded in the back of the one in front of it. The man’s own screen is dark. She’s as successful as the man’s comprehension is at comprehending the line he is again rereading, now. All the screens are touch-screens. Games, TV, Movies, Flight Tracker. There are many options, and options within options. There is a lot of repeating as the boy truncates his mother’s guidance with a series of whines, hiccups, frustrations. Because not everything's free.

“Good book?” A voice from the right.

The man puts a finger in the book’s spine’s crease, closes it. “Yeah. So far.”

“Barry.” Barry extends a hand across the middle seat, in which the man with the partially closed book’s wife is seated with a soporific neck.

Obligation has arrived, Oz can feel its undeniable presence as sure as he can feel his wife’s head settling deeper into the pocket the meeting of his neck and shoulder makes.

“Not all of the options are free, Zev.” The woman in the blue dress, she doesn’t turn around, says to her own personal screen, her finger swiping and tapping and searching. Games, movies and the like; some movies are free, others are not. The woman in the blue dress, this is what she is trying to explain without turning around: She isn’t going to pay an arm and a leg, on credit mind you, for a movie there isn’t enough time to finish anyhow. She’s explaining over the din of the engine. Zev blackballs a formal complaint against the nature of things, over the din of the engine.

“What do you do?” Oz asks Barry; he slips his finger from out the book, rests his hands heavily on the front cover.

“I’m a producer. I make documentary films.” Barry’s face belies the natural pretension of the line itself. For this, Oz is somewhat grateful.

Tray tables shake; the cabin’s air, a soupy goulash sound, has trouble defining itself through: there is always something dreamlike when it comes to sound and airplanes.

Oz feels like someone has stuck straws in his ears and is sucking.

“Just getting home from wrapping up a shoot,” Barry says, “in Ecuador. A film about poverty.”

“Must be hard to separate one’s self. You know, staying behind the camera, like one should in order to correctly and authentically create such a thing, you know?”

“I know exactly. You’re right, deciding to get the shot, to ignore your humanity, yeah, it can get tough.”

After a beat, Barry says, “what do you do; you a writer?”

“Guess it depends on the subjective perspective. I write.”

“I thought so.” Barry has pulled out large headphones, the kind that Grunge-clean-Hipsters have started wearing, all around. “I only get questions like that from writers. What do you write?”

Oz’s wife’s head lifts, tiredly. She knows this question will elicit one of two outcomes. One will allow her to return to her dozing sleep, the other will not. She is waiting, a soft-pedalled hope that her husband is sufficiently himself.

“You like the Lion King, Zev. Find the Lion King. We can finish it tonight when you get home.” The woman in the blue dress says.

“Poetry. Snap shots, I guess; narrative chapters of moments.” Oz is slightly hunched forward, looking at but not looking at Barry.

The pilot’s voice, like crinkling paper, blasts out of the many speakers, located near every seat. Oz’s wife, easily startled, starts. Huffs.

“I guess there is a commonality with what I write and what you do, with one noticeable difference,” Oz says, still hunched forward, lowering the tray-table in front of him. “You shoot shots as they exist in moments. That’s what I write, almost filmic-like. But the difference I think is that you are inspired from the outside in. Meaning you see something that inspires you and you shoot it. My, um, inspiration begins on the inside, ripples out. A feeling will dictate what I see, how I see it. That’s what I write, I suppose.”

He looks up and down the aisle, now blocked from both ends; stewards closing in on one another with rolling desks, serving pretzels, drinks.

Barry seems interested, he has yet to slip into his headphones. Oz regrets, as he does every time he gets into a conversation with someone other than his wife, his rambled explanation. He looks back at Barry, who is smiling.

“I like to think there isn’t much difference between a writer and a producer. We exist to tell a story; to guide the audience through a range of emotion. That’s our job. We don’t manipulate people’s emotions, we simply give them a choice, let them choose – show them the possibility and range of emotion that exists in all of us.”

Oz’s wife knew this had become dangerous, for her sake. She touches the screen – hope fading quickly away – and begins to look at the games available to her.

“Think of what you want to drink, Zev.” The woman in the blue dress says to the back of the seat in front of her. No indication that Zev heard his mother.

Oz too knew this was dangerous. He knew that manipulation of ‘audience’ was key. That writers, hell, as artists to make it easier on himself, had or should have, the utmost control of emotion. It is magic almost, he thought. That the emotions of people were mere puppets, just waiting to be fully manipulated; He doesn’t say this. He smiles and tells Barry that Barry is corrected. Well stated.

Oz sits back into his seat. Barry momentarily slips his headphones over his ears and begins to play with the screen in front of him. Oz’s wife, her satisfaction, she turns off her screen and returns her head to Oz’s neck and shoulder’s depression.

As people receive their snack, their drinks, as they settle into whatever it is they have chosen on their screens, the only thing Oz can hear is the muffled ordering, the roaring engines.

Oz, his wife, asks for a Coke, no ice, and a coffee. Barry asks for a water, lots of ice.

He watches as a male stewardess, bright red tie perfectly tied into what he believes is called The Plattsburgh Knot, scoop a scoop of ice, shovel it into a small plastic knot. A single cube misses its mark. Oz watches it fall to the floor, bounce, disappear under the seat in front of him.

He thought he could hear it slowly begin to melt.

Oz nudges his wife, slyly points out the window next to Barry.

“What?” She lifts her head, looks out the window.

“The horizon. It’s always at eye level. Even at 36 thousand feet.”

“Nothing really,” he says, thinking about what he told Barry about control, about manipulation. “It’s just weird, is all.”

He feels manipulated in some indescribable way.