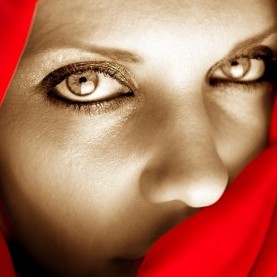 A border patrol officer has second thoughts regarding his role in keeping refugees out of his country.

They keep coming. Like swarms of bees prepared to needle my conscience. Just look at them. Barking and whining like wounded dogs, moving like sheep. Some yap at me through the barbed wire as if I’m all that stands in their way. I show no emotion like I’ve been told: hold strong, look unyielding. Some protest; others cry. Distraught children wrap themselves around their parents.

One after another, their rubber boats wash ashore. They are long and flimsy, move slow, half-submerged from the weight of hope they carry. Some don’t make it. Those who do are met with fences and guards like me whose roles are to keep them out. But they keep coming, hoping something will give. Hoping the sheer force of their audacity will bend the rules somehow, will snap our resolve.

We’ve been trained to be unsympathetic. They say there are extremists among them, but these aren’t the faces of radicals. I see warmth in their eyes, something deeper than outrage. There is physical and emotional hunger, too … and surprise. Fear has both fueled and diminished them. All they have left is anxiety.

They reserve their strength for their children. Play clapping and singing games with them. Nervously smiling, sometimes laughing at a missed cue or beat. Hold them on their shoulders so they can see the void on the other side of the fence that could be filled.

I look down from the hill above. There are thousands of them. Might as well be millions. Bodies cramming themselves into my frame of sight like puzzle pieces that don’t fit. No one and nothing is distinct. Yet, something red catches my eye. A ball …? No … a balloon … a red balloon gone limp, half deflated on a white string. The depressed orb falls to its side as it struggles to keep afloat in the windless air. Mother and daughter (cross-legged, facing each other) tap it back and forth. From time to time, the mother leans in close to her daughter and smiles reassuringly. Her smiles are all the more beautiful because I can detect her uncertainty beneath them. Her full lips open and a new world blooms. Her eyes sparkle love and (underneath her nervousness) joy.

It occurs to me that it’s been years since I’ve seen anything as pretty as the mother’s smile. Adonia used to look at Antheia like that. Now, there’s too much tension between them. Just this morning I heard them in the kitchen.

“Are you waiting for someone better?”

“Do you think there will be someone better?”

“It’s not him I’m rejecting, Mama. Not him in particular, anyway … just a life with someone like him.”

“I don’t want the life you live with Papa. I don’t want to wake up twenty-five years from now only to realize I married my father. Besides, I don’t need a man to define me. I can do well living a life alone.”

“What’s so wrong with your father? You could do much worse.”

“I’m not saying better. I’m just saying different. For hours every day Papa stands behind a fence keeping thousands of refugees out, and we hear nothing about it. Does he care? Is he conflicted? Is he ashamed? … Nothing … we get nothing.”

That woman’s smile reminds me how much I love Adonia. Like that woman, she would be too strong and too stubborn to allow anything or anyone to decide her fate. She would play the game with that balloon until it was dead, and then she would find another use for it. “Oh,” Adonia would say smiling, “a deflated balloon is a wonderful toy. If you pull back on it and let it go, like this, it can fly … see? … Here, I’ll show you a game we can play with the string.”

To my left there is a young guard I don’t know. He stands before the crowd unmoved, stone-faced and silent. He is well over six feet tall and broad-shouldered. For even him, I think, intimidation is hard work. I notice a bead of sweat trickling down from the black band of his beret over his right temple, passing the lobe of his ear, slowly seeping along the side of his neck and disappearing into the collar of his shirt. Still, he doesn’t move. His look remains both impassive and indifferent. To my right stands an older guard I know. He is shorter and his body is much softer than that of the man to my left, but his glare at the crowd is just as hard and just as vacant. Sweat circles the circumference of his cap and has soaked his shirt and vest. I realize we have spoken progressively less to each other since this crisis broke out.

Self-consciously I wonder what they notice about me, what I look like to them. I, too, am bathed in sweat, and my sweat-soaked uniform clings tightly to my thin, frail frame. To them, I am an old, doddering soldier on the brink of retirement. My most effective days are behind me. Though, I was never overly impressive, never a man to be feared. I was a good soldier only because of my heightened sense of duty, my dedication and obedience. My boots were always polished, my uniform pressed, my mouth (unless spoken to) shut. I was never given to heroics. Always prone to giving respect, I’m not sure if I ever received or deserved it myself.

To my peers I look feeble and powerless, but what do I look like to those on the other side of the fence? If my own daughter thinks I’m as closed as I’ve been trained to be, then, to the woman with the beautiful smile and her daughter, I must be the embodiment of denial. I am a cold-hearted closed book, an immovable tyrant, evil incarnate. But, in reality, I am drawn to them even though they seem oblivious to their surroundings, and to the fact that they are all I see. I stare at them and dream.

In my mind, I sit in a circle with the woman and her daughter (cross-legged like them) tapping the red balloon to one then the other. The little girl is giddy with excitement and the woman, between encouraging gestures to her daughter, gives furtive, though animated, glances at me. From time to time, she touches my shoulder, and I feel joy, pure unadulterated joy at having only the balloon, the woman and the girl on which to focus. For me (at this moment, anyway), there is no crisis; just a balloon and a girl’s happiness to keep afloat.

The noise of the crowd wakes me and suddenly I want to share my secret. I step closer to the masses until I make eye contact with the beautiful woman and direct her toward the left end of the fence with a subtle tilt of my head. She responds by picking up her little girl and moving with me, matching my steps. The crowd parts for her. Her figure glows in the sun and we move in sync. In unison, we turn our heads and look intensely in each other’s eyes as we make our way along the fence. A rush of adrenaline propels me forward. Everything else, besides the woman and her child, is a blur.

As we near the far left corner of the fence, I realize I didn’t think this through. I acted on impulse. It is the case that the fence is guarded less at its corners than at the gate in its middle, and it is true that there is a place at the left corner where the fence’s integrity has been compromised and could be hurdled rather easily, but security seems to be everywhere. I feel guards’ eyes on me; a few follow me on foot. We’ll have to work fast, I think. I’ll take the child into my arms over the fence; the woman will have to climb over quickly. Then, we’ll run. We’ll run faster than we’ve ever run in our lives.

Our destination is within sight and I feel the rush that comes with being a renegade, a righteous enemy of the state. If caught, I will be a political prisoner. If not, maybe Antheia’s hero. When I get to the fence’s depressed corner, I reach out for the child, and, just as her mother lifts her tiny body up to my raised arms, I look down at my feet which have been firmly planted in place. I haven’t moved. The imposing guard to my left rolls his shoulders lightly; the guard to my right lets out a big yawn.