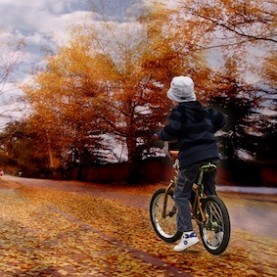 "From her bedroom window, she held sight of the greatest part of her world."

From her bedroom window, she held sight of the greatest part of her world. Only a mere hundred feet away, she discovered the one thing that gave her life meaning, the one thing that filled her heart with greatness. It isn’t everyday one is blessed with the simple yet rare unearthing of what it means to be loved. But she had found it. She had felt it her entire life without knowing.
She steps back from the window seal now aged with neglection. She removes her spectacles from her nose and buries them into the thicket of white and gray now thinning from her scalp. She takes a deep breath and paces around what was once her personal sanctuary, what was once her private hideout. Years and years have went by since the quaint room had housed anything but cardboard boxes, but to her it all feels the same. This was her space. This was her peace. This was the one place she could allow her true colors to gleam without the fear of them being muted.

She visions back to a time when her face knew nothing of wrinkles. When her hair was as long as her favorite song, American Pie. What seems as another lifetime ago feels like yesterday: it has never left her. She was so close she could almost taste the tears falling from her eyes. She could almost hear the laughter ringing over and over again in her ears. She could see the running, the dancing, the living of her life to the absolute fullest. She closed her eyes and felt it all over again- her dreams slipping away from her, always so close yet so unreachable.

She exits the room and finds herself wandering the streets of what used to be her whole existence. These very streets housed her youthful imagination and set fire to her teenage ambitions. The paved black road had turned a pale gray. The bright yellow lines that used to glimmer under the sun have become nearly invisible. The unbearably red swingset set in her backyard had rusted into a deep crimson. What feels as a moment ago appears as if a century has gone by. Strolling only a minor minute led her to the doorstep of the place she felt herself falling for the first time. Just the push of a button, a move of the joint would send herself spiralling into the oblivion of regret.

Cars line driveway, and she wonders if one of them belongs to her. She turns away as the once closed door behind her peeks open bringing light to a beautiful young girl with bright hazel eyes that she had once known every spec of.

"Hi" the young girl whispers in such a innocent voice it nearly melted her.

"Hey, I was just admiring these Lily's on your doorstep." I reply startled.

"My mommy picked them out." She exclaimed.

"Well they are lovely" I mutter. "I'm going to head back home" I say as I back away from the door, “have a nice day."

"What's your name?" The little girl asked as she followed me down her front steps.
"Addlyn." I reply quizzically.

"I wanna show you something." She states as she turns away and motions me to follow her inside.

The living area was arranged so differently from when I had last stepped foot in it. The furniture theme had changed from turquoise and black to crimson and charcoal grey.

"Come here!" She squeals in a voice that would make even the meanest of men break into a smile.

"This is you" she says. As she points to a picture of her me standing on top of Mount Everest. A picture taken only a few short weeks after my high school graduationl. "My granddaddy says that you were the greatest person he's ever known. He's told us all kinds of stories, how you traveled the world together, and went to school together, even grew up next door to each other. Grandma always got a little mad. When he told me the stories he almost looked like he wasn't sick anymore. It made him so happy that I asked him to tell me a story every day, just so he could feel better."

"You already did." She says as she crawls into my arms.

We sat like that for a long time, simply holding one another. We had both loved the same man, and missed him in our own way. Though sixty years apart, the pain was all the same.

One never forgets their first love. There will always be a special placed marked out in the highways of our hearts reserved especially for the first person to take away our innocence. No matter who or how the final words were spoken, no ounce of hatred can come from the hearts of the ones we once loved. It may take a lifetime to find this person. To find the one who makes every ounce of pain worthwhile. But they will be found. And when they are, don't let go of them. Hold on with all the might in your weak and frail bones. There will be hard times, and there will be pain, but don't run from it. Don't look back years later and live in the regret that was "yesterday". I release my grip and stare down at the gentle soul beneath me. She had fallen asleep in the arms of a stranger who felt the same pain that she did. I pick up the picture frame housing one of my greatest accomplishments, conquering Mount Everest. There’s so much joy in this photo it gleams from the still frame it is found in. I take the photo out of its place and hold it in my hand. I turned it over to read the words I had written what seemed ages ago:

“A hundred feet. 42 steps. One minute and four seconds away lived the love of my existence. Eighteen years went by before I did anything about it. And now, here we are, 29,029 feet in the air. We can see the entire world from up here. But then again, I could see my entire world from my bedroom window. A mere hundred feet away I discovered the one thing that gave my life meaning, it was you.”
Adalyn 1978