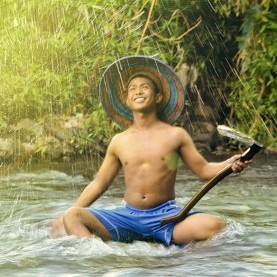 In chapter 1, we were introduced to Meg. This second chapter features her childhood friend, Daniel, and gives a bit of background.

~~Daniel woke from a nightmare and looked at his bedside clock. It was only one o’clock, but knowing he wouldn’t get back to sleep, he went downstairs to make a hot drink.
From the kitchen window he could see Meg’s cottage was in darkness and was comforted to know that his childhood friend wasn’t also suffering from insomnia. His parents had told him she came back to her mother’s house after a painful divorce, and his heart ached for her when her mother died only a few months later.
Meg was like a kid sister to him, she had been his confidante and his best friend. Between the ages of two and fifteen, Meg and Daniel were inseparable.
His parents were a product of the sixties, but unlike most people of the flower power era, they never grew out of it. Their clothes were reminiscent of that hedonistic period; long flowing dresses for her and floral shirts over flared trousers for her husband.
At six next morning the blasting of a car horn brought Daniel fully awake again. He looked out of his bedroom window; his parents were ready to leave on a round-the-world trip in their green and white VW camper van. It was packed to the roof with equipment to last a year, but he suspected they’d be gone for longer - if they found their guru in India. This was one of the reasons he’d come back from Africa, they wanted him to look after the house, but truthfully, he was ready to return.
This was not a demonstrative family, so with a quick wave in the direction of their only son, Mr and Mrs O’Neill drove off.

Somewhat reminded me of the feeling you get when watching the movie The Notebook.
Tweets by @thepenfactor