Boy in the Water 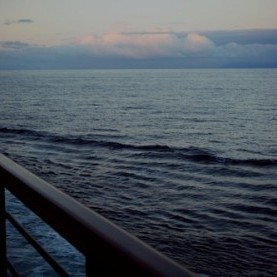 Boy in the Water

A man awakens in crisis.

It was 4:15 AM. Monday, Wạn cạnthr̒. The time is important because from 4 onwards, in the far beaches of Cha’am; more than anywhere else, I find the world comes to a stop. The air, normally thick and busy, had, that night, become sort-of composed; in the way I imagine it would be beyond the earth’s atmosphere, like in the star constellations I could sometimes see from my balcony. It was almost silent too, save for my old pine-clock ticking on the far side of the room. The rustling of sheets beside me was of an 18 year-old local girl. A Khon mask lusted from in the dusk. These were the conditions in which my 59 year-old self came to an epiphany of sorts. I had, against all expectations, become a man.

The fan above us rotated too slowly to be useful but it cast a fleeting shadow across the face of the girl (her name still eludes me) and I remember that pang, like a chip of shrapnel in my chest, at the memory of the dark, exotic creature crawling onto my bed for the first time and how ugly I had felt watching her. I thought back to a tall pale woman instead, wedding silk dripping from her blonde, normal hair and a white, English smile covered by a veil.
I reached instinctively for the sanctity of a bottle. I find I drink less when I’m in Thailand.

When I was younger, I had this way I saw men. They’d drive BMWs, drink whiskey, they’d have to have a wife, children and a mortgage and they usually had this gruff depressing way about them. They would say things like, ‘make it quick’ and, in truth, I always smiled inwardly at the thought of becoming one of them. I thought: ‘I’ll be happy as long as, at some point, I get to put my dick in a model’. When I was younger.
“Dear, wake up please.” I muttered this into the darkness but there was no response. I saw a glimpse of her cheek in the auburn light as the fan’s shadow passed it over, “Dear, wake up. I want you to leave please.” I pressed my wrinkled hand against her shoulder. She moaned something and rolled onto her back.
“It’s very early, Mr. Stevieson.”
“I know. Wake up.” She shuffled up, hesitating to open her eyes.

“Why wake up now?”
“I need you to leave.” The two brown orbs grated open in the shade.
“Leave?”
“Yes, leave.”
“Why?”
“Because I said so.” I smelt my own breath; stale whiskey that hung, pungent, in the air. “Up.”
“Mr Stevieson-“
“Stevenson.”
“Yes, you said you were take for shopping tomorrow.”
“I lied.” A dim lamp crackled to life and punched a hole in the darkness. She turned an incredulous face towards me.
“You lying?”
“Yes.”
“You fucking liar?”
“Yes.”
She kicked the quilt away with a thin leg, bouncing to her feet. The faint light grasped half a figure, a jutting ribcage, a brown areola, her small breast, barely visible. Two eyes, wide and potent, a set of crooked teeth.
“You-“ she clambered into a pair of dirty jeans, “you use me.”
She shook her black mane.
“All want is sex, right?”
I felt something hot drip from my cheek onto the bed sheets. She laughed incredulously.
“Really?”
I bowed my head as the blood rushed to my face.
“You are pathetic, old, lonely man.”
I heard clothes rustling, the zip of an opened handbag and a click as she fastened her sandals.
“Tao hua ngoo.”
She flung the handbag over her shoulder.
“I’m sorry” I muttered to myself as she strode out into the lobby, the door unclosed.

I swung the bottle dizzily to my lips, chestnut liquor lapping at my tongue and dribbling down my shirt. I caught a glimpse of Clint Eastwood in the balcony window as I slid it open. The temperature was identical outside. The ocean was churning. I thought of my mother’s face then, a birthday cake; blue icing and a badly drawn Eeyore. Eeyore. Man. I swigged another gulp as the caricatures dissolved in my mind. Then something winked at me from across the jagged expanse of water. Something pale was dancing on the surface of the ocean.

I’ve never been religious but when I saw that somebody out there on the waves, I felt like redemption had come calling. I can still feel the wet sand flying from my feet as I tore down the beach and my sagging, heavy, white body was naked by the time I had touched that warm water for the first time. Black water, the kind you can’t see through, at least not with only the moon shining a torch’s ray across the waves. I clawed my way through the blackness until my feet had left the bottom and the gulf of Thailand swelled around my neck. I was puffing warm breath into the sea air and with every stroke the torches of my bungalow were flickering further away. A half litre of water surged through my lips as I breathed in, I was spluttering, I dribbled out a salty bullet of phlegm. None of it mattered though. The world around me was darkening; I felt my old muscles giving way with every palm forward.

I was right. There he was. A man. A body, flailing like a doll. A bush of soaking, brown hair that emerged and drowned as the landscape entombed him. He was surrounded by a layer of white froth, a set of pale digits wriggled upwards, clear against the moonlight. I thrashed forward, rupturing the surf as I got closer but a wave buried me, he disappeared.
“Hello?”
The ocean bellowed in response.
“I-I’m here to save you.”
The words came out like the gawpings of a fish. He was gone. I circled, a flurry of rollers slapping me across the face. Then from the corner of my eye I saw a glimmer, a forefinger lingering above the water before dropping below. I dived under.

The world beneath was endless. The darkness was vertiginous. I spun. There, a teenage boy descending into the black briny. He sunk like a corpse, his skin burning chalk white in the darkness. I surged forward; he looked no older than 14, naked but for a pair of blue speedos, sinking with every stroke I made forward. He was ghostly pale, his every hair billowing. I felt a bolt of panic. What if?

Almost. He jerked as he sunk lower but I clutched his thin wrist in time. His face turned, bulbous and bloated, a stream of bubbles spurting from his lips. I recognized him. I wasn’t sure from where at first but as his eyes sprung open, it was clear. It was the first time I’d seen him in years. I wondered whether I looked like a man with a BMW, I wondered if he would think much of my whiskey collection and trophy wife. The boy I had forgotten. A set of young eyes, pale and lost gazed into my own as I felt my grip loosen. I floated for a moment as it became clear. Clear that a man is a caricature. I’d got it all wrong. Then I watched as my younger self drowned, sinking deep into the gloom. Long out of sight.

I was a little confused by this story at first but improved with the presence of the girl. I am unsure of the meaning of the word caricature in this context, it doesn't quite gel with me. I am also unsure of your meaning in regard to the boy - are you saying he is the man as a boy? If so, his purpose is not clear. The references to manhood are also not clear. The pace, sentence construction and dialogue is good but, for me the story lacks clarity. There are several occasions where the writing seems contradictory. For instance "I reached instinctively for the sanctity of a bottle. I find I drink less when I’m in Thailand." There is this atmosphere of the tropics that comes across well and the scene with prostitute is believable but I think it needs work. Perhaps more carefully chosen words to convey meaning.

Good and bad points here. The good is that setting, story, and conflict between the characters was distinctive and interesting, and many of the descriptive phrases seemed fresh and convincing. The bad is that there were too many technical failings. I've listed examples below for you. Overall I think you've got a story-telling capability but you need to develop your technical skills. I hope that helps. The sort of technical glitches you need to iron out are: 1) Some of the phrases that didn't make literal sense, and didn't work metaphorically either. For example, the bit about the air, and how things might be beyond the atmosphere. 2) There were un-necessary words here and there that added nothing to the meaning. For example, the sound of the clock ticking could be the sound of the clock. You could have lopped the last four words off the phrase 'by the time I had touched the water for the first time.' The individual instances of un-necessary aren't important in themselves, but they add-up to a bad effect. 3) Some of the turns of phrase are unfortunate. For example, where you describe the man sinking and say 'drowned as the landscape entombed him', landscape is the wrong metaphor. 4) Some of the punctuation is wrong, such as the semi-colon in the second sentence. 5) Opening with a statement of the exact time is unimaginative.

Great story. Very well written and the descriptive powers you possess are excellent. I felt sorry for the man who was so obviously unhappy with his current circumstances. You've got the balance right and the ending was very sad but realistic. Well done
Tweets by @thepenfactor